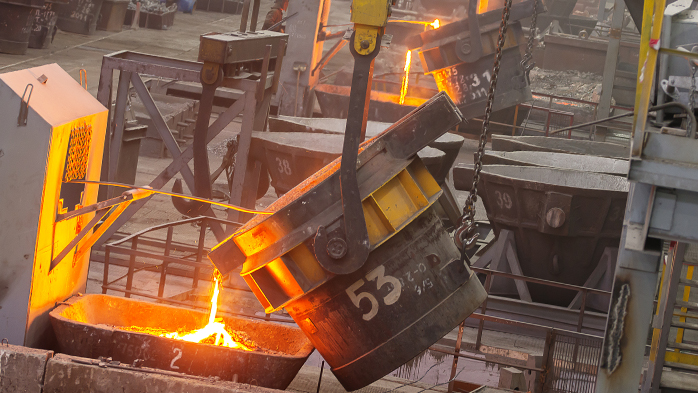 CRU data does not match exactly those presented by Greenpeace in their recent report, although we agree with the broad magnitude of some of the numbers suggested.


However, in our view, the Greenpeace research has incorrectly equated steel mill closures, particularly those that took place in 2015, and their subsequent reopening, with capacity changes.  In fact, the closure and reopening of steel mills in 2015 and 2016 have no bearing on the capacity situation in China, only on where steel is made.  Additionally, we are not certain that the research has treated non-operational capacity properly in its calculations, which assume that this capacity appeared in 2016.  However, this capacity was already present prior to 2016.

When is a steel mill closure a capacity reduction?

The second half of 2015 was the worst period in recent history for the Chinese steel industry, as demand fell and profitability dropped to unsustainably low levels.  As the industry entered 'survival mode', exports of steel jumped, causing a global outcry and significant problems for other countries' steel industries.  But from CRU's perspective, the behaviour of the Chinese steel sector during that period was no different from that expected of any other anywhere.  Yes, export prices fell to marginal cost levels, a rational, short-term response to the circumstances, but cost-cutting became a priority, with de-manning, salary cuts, the renegotiation of supply contracts and, importantly, the unilateral shutdown by steel companies of, in our estimation, 60 Mt/y of steelmaking capacity.  These were not government-mandated closures; they were the result of economic decisions taken by steel mill managers based on the prevailing conditions.  However, this capacity was never removed from the system and so its closure and subsequent reopening has no bearing on the overall capacity situation in China.  That is, the closure of mills, if not permanent, does not represent a reduction in capacity.  Likewise, restarts of these same mills do not represent additions to capacity.

What really happened to steel capacity in China in 2016?

Ignoring the steel mill closures from 2015 and any subsequent reopening of these mills, we believe that, in 2016, 67 Mt of capacity was truly eliminated under government-mandated targets, less than the number suggested by Greenpeace, of 85 Mt/y.  In our view, perhaps 44 Mt/y of this was already non-operational (n.b. Greenpeace suggests c.62 Mt/y).  Additional capacity was brought online, for example, by Baosteel at Zhanjiang, but the government requires this to be offset by closures elsewhere within the group, in line with the order to ensure a net decrease in steelmaking capacity associated with any new investment.  That is, approved and under-construction projects needed to strictly follow a 'reduction swap' policy, with the 'swap' ratio for environmentally sensitive areas, such as Beijing-Tianjin-Hebei, the Yangtze River Delta and the Pearl River Delta, to be no less than 1:1.25 (i.e. 25% more of old capacity needs to be closed).  To confirm, these capacity additions were the result of investment decisions taken several years ago and, in our view, are not part of any current trend to increase capacity.  In addition, these latter capacity additions were not based in 'heavily-polluted' regions and no fresh capacity additions have been brought online in heavily-polluted regions in 2016. 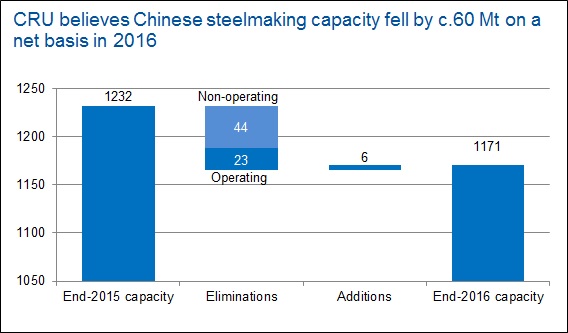 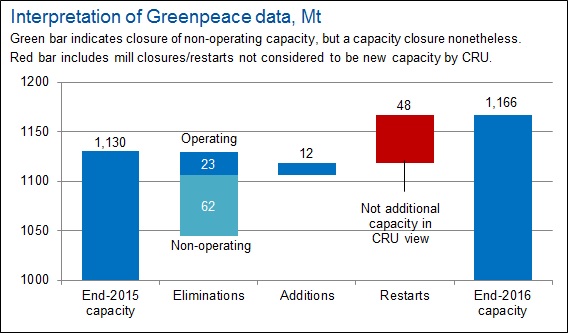 Thus, based on CRU's numbers, capacity fell by c.60 Mt/y in 2016, taking into Zhanjiang additions and capacity creep, although the number might be slightly higher once capacity swaps are taken into account.  Applying the same methodology to the Greenpeace numbers, suggests that capacity fell by c.79 Mt/y.  In either case, our view is that steelmaking capacity in China has fallen during 2016.

Why do we believe the capacity reduction targets will be met?

As we have set out above, genuine progress has been made on capacity eliminations in China, but these initial successes have been obtained by focusing on easier targets, such as previously idled facilities.  But this is not the whole story - we have seen steel companies make unilateral decisions to close down unprofitable mills, the government-mandated closure of operational steel mills and, now, a strong focus on the induction furnace sector that has been undermining the steel market in China in recent years.  However, the closure of steel mills engenders huge social, economic and political implications and progress from here will not be easy - so why do we think capacity will continue to close?

Looking at the provincial targets for capacity elimination, the larger steelmaking provinces have named specific mills that are targeted for closure.  These mills tend to be those with sub-scale equipment, as defined in the Steel Industry 13th Five-Year Plan (i.e. blast furnaces <400 m3 inner volume, BOF vessels at <30 t, EAFs at <30 t and induction furnaces) or where there is poor integration (i.e. island-site blast furnaces).  The fact that the performance of provincial government officials will now be measured on the success of achieving capacity closures provides added incentive to ensure targets are met.  In addition, there are now regular inspections by government bodies like the National Resource Development Council (NRDC) and the Ministry of Industry and Information Technology (MIIT) and, within Central government, there is a dedicated team of people to track progress of the closure programme.  The raising of the induction furnace closure programme to a 'political' level policy and the cancelling of the hot end at WISCO plant at Fangchenggang also speak volumes about the government intent.