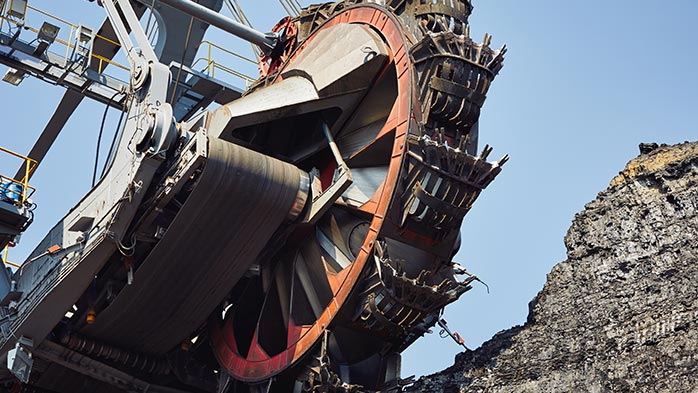 Extremely high and volatile metallurgical coal prices since mid-2016 have, after 3-4 years of scrutiny on cost reduction, shifted the focus of the industry away from costs of production – with spot prices spiking to ~200% above average costs of the industry, as they have done twice in the last year or so, changes to operating costs have, inevitably, seemed of little importance.


However, in a competitive industry such as coal mining, prices do not disconnect from costs for long and, in the most recent edition of CRU’s Metallurgical Coal Market Outlook, we discuss when this re-connection will happen. Equally, while changes to costs that occur now will have little impact on the bottom line of producers in the short-term, they will affect decisions around future supply and, ultimately, where metallurgical coal prices settle under more steady-state conditions.

This note sets out an analysis of the impact of different assumptions around the Renminbi exchange rate and labour cost inflation in China and shows that these factors alone could have a significant influence on medium- and long-term price levels.

Volatile Chinese production costs
In 2017, certain major assets are likely to be divested and decisions around new projects will be made, although the volatility in prices makes reaching an agreement on valuations and justifying investments very difficult. However, CRU strongly believes that an understanding of future changes to costs in different regions can provide a basis for understanding where steady-state, long-term prices will settle and this makes reaching important, difficult decisions on mines and projects more feasible. As such, during the research process for the update to CRU’s Metallurgical Coal Cost Model in May, a number of interesting insights were gained that we believe will be useful to those trying to understand the trajectory of metallurgical coal prices in the coming years (e.g. the cost impact of Cyclone Debbie, breakeven prices of mines that are re-opening and Economic Costs of new projects) and this short note highlights one of the more important findings.

CRU has written at length about the impact that Chinese supply-side policy is having on the coal market and we will not repeat this analysis here. However, as the last year or so has clearly demonstrated, the Chinese government has both the will and means to improve the structure and profitability of its coal sector. But this is no short-term task and, given the extremely high levels of debt in the coal sector (e.g. debt of the top 7 coal producers in Shanxi has reached RMB1.3 trillion, surpassing GDP of the entire province), we believe that the Chinese government will need to continue to manage supply in the medium- and long-term, such that mining operations are able to generate sufficient levels of cash to support restructuring of the sector. Of course, profitability is determined by price levels and costs and if, like us, you expect prices to fluctuate around the level of the marginal cost producers in the Chinese coal sector, how costs change in China will be critical. 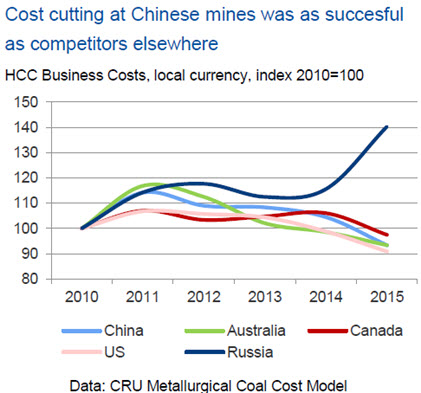 Much like the rest of the coal industry, Chinese mine owners responded to the relentless price decline from 2012-2016 H1 by doing everything they could to cut costs. The accompanying chart demonstrates that, in local currency-terms, the Chinese sector was as successful as miners in other countries in this regard. However, methods to achieve these results in China were more extreme than in other countries where workers’ rights of employment and safety play a larger role:

Around the time of such action, international prices continued to decline and a number of banks and other forecasters slashed long-term, hard coking coal price projections to levels well below $100 /t and this implied – knowingly or otherwise – that the Chinese coal sector would either have to continue to cut costs significantly, and perhaps unsustainably, or that losses would mount. However, events over the last year reinforce CRU’s enduring view that neither of these outcomes are likely in the medium-term.

Indeed, our recent research shows that much of the cost-cutting that took place in China while prices were falling was, very definitely, unsustainable and, since prices have rallied, costs have risen once again (n.b. albeit from an artificially low base). Analysts in CRU’s Beijing office have found that unit costs at operations producing largely coking coal have increased by 30-70% in local currency-terms from the low point just prior to the implementation of the ‘276 working days’ policy in April 2016. There are a number of reasons behind this upsurge in costs:

Of course, many of these measures are only required because of the extent of the previous pullback in spending, therefore, we believe the full magnitude of the current uplift in costs will also be temporary. Moreover, as international prices revert towards more sustainable levels (i.e. relative to costs), cost control will become an important theme in the industry once again. Having spoken to a number of players across the sector, we have taken these factors into account in our analysis and the accompanying chart shows our calendar year estimates for metallurgical coal cash costs, ex-mine basis, in China up to 2017. Considering the additional costs and a number of other variables (e.g. transportation, coal qualities, freight, exchange rate etc.) we estimate that the average cost level in China in 2017, equivalent to the hard coking coal, FOB Australia benchmark, will be $113 /t. 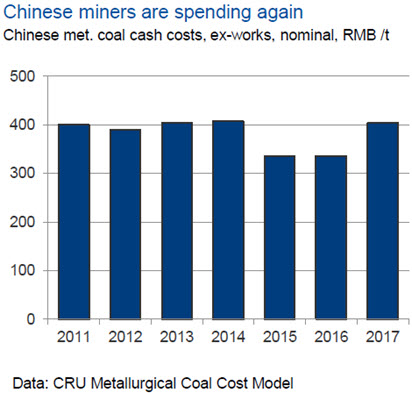 CRU’s cost service provides access to our cost model, which contains CRU’s base case forecasts for industry costs in all regions, including China. Moreover, it is a tool that allows users to flex inputs that are key to determining future metallurgical coal production costs, most pertinently:

In the following chart, we have plotted a 2025 metallurgical coal cost curve for just one Chinese province, Hebei (n.b. a province with relatively high Business Costs compared with China as a whole), under different assumptions for the Renminbi and wage inflation.

As demonstrated above, variables such as exchange rate and labour inflation have a significant influence on the cost base of the Chinese and, therefore, global metallurgical coal cost curve, particularly the upper end of the curve that is important for price-setting. As such, CRU’s Metallurgical Coal Cost Model provides an extremely useful tool for forecasting medium- and long-term prices under a range of different scenarios.

Conclusion
As mentioned previously, cost metrics are not of huge importance to the performance of the industry today – it is clear to all involved that Chinese coal miners are making good money – however, how they develop will be critical to the level around which coal prices will fluctuate in the medium- and long-term. In turn, this will have a direct impact on the real value of the numerous minesthat are likely to change hands outside China during 2017.

CRU’s coal analysts in Beijing will be doing more site visits in the coming months to ensure we keep our subscribers informed of the latest developments in this critical area of the market.