CRU's examination of global uranium mining costs has found that weighted average global Site Costs fell by $1 /lb in 2015, to $31 /lb. As such, 2015 marked the first year of global mining cost deflation since 2010 - a welcome development for uranium miners worldwide after years of squeezed margins.


The key drivers of this cost deflation were:

This cost deflation rendered the vast majority of mines cash-positive in 2015, as shown below in CRU's global Business Costs curve (n.b. individual mine names have been removed). 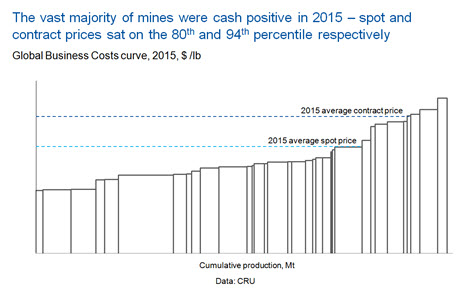 Profitability varies greatly by country and mine-type
CRU's analysis of mining costs at individual assets and across different uranium-producing countries has highlighted the scale of the differences in profitability across the industry.

To conduct our assessment of the relative cost competitiveness of individual mines, producers and regions around the world, we look at both Site Costs (i.e. the cost breakdown on-site at each mine) and Business Costs. Business costs include the additional costs associated with the transportation, sales and marketing of the commodity. The following analysis is based on our analysis of CRU's global uranium Business Costs curve.

Kazakhstan and its in-situ leach (ISL) mines dominate the 1st quartile of CRU's global uranium Business Costs curve. Sulphuric acid is a key cost driver for Kazakh ISL mines and, over the past few years, Kazakh operations have benefited from a less volatile and lower priced acid market. Sulphur burning capacity has been upgraded and sulphuric acid market tightness eased in the region. As a result, mine gate prices in Kazakhstan have moderated from 2011 highs of $280-320 /t down to $120-140 /t in 2015.

A relatively tight market for skilled labour is pushing local wages higher, but the sharp depreciation in the Kazakhstani Tenge meant that wage inflation, in US Dollar-terms, was negative in 2015.

Canadian operations are spread across CRU's global cost curve. McArthur River remains the lowest cost underground mine in the world and costs here fell slightly in 2015 in Canadian Dollar-terms - a reduction that was amplified in US Dollar-terms by the depreciation of the local currency. Towards the higher end of the cost curve is Cigar Lake, where underground mining began in 2014. However, we believe that cash costs here will fall in the coming years, as the mine reaches full capacity by 2018. Our analysis finds that all Canadian mines were cash-positive in 2015.

Following the closure of Honeymoon and Beverley mines, there are currently only three operating uranium mines in Australia and all are located in the 2nd half of our cost curve. Costs fell in 2015 at the Ranger mine, where uranium is currently produced from onsite stockpiled material. At Olympic Dam, uranium is produced as a by-product of copper, which accounts for the larger share of revenues and is the primary determinant of mine economics. Four Mile hit production capacity in June 2015 and, while the focus is currently on the Four Mile East deposit, we expect the mine's relative cost position to improve when mining moves on to the higher-grade Four Mile West deposit in the coming years.

The Priargunsky underground mine in Russia produced almost 71% of domestic uranium in 2015, with the remainder coming from the Dalur and Khiagda mines. While Priargunsky sits near the top of our cost curve, its competitive position in 2015 improved compared with previous years due to the sharp depreciation of the Russian Ruble.

While operating cost information is not publicly disclosed for the two operating uranium mines in Niger, CRU has examined key technical parameters to conclude that the Arlit and Akouta operations both sit in the 2nd half of CRU's cost curve. Indeed, CNNC's decision to idle Azelik in 2014 supports our view of the challenging operating conditions in the country.

While CRU assesses that global uranium mining costs have deflated in the last couple of years, we estimate that Business Costs in Niger have, in fact, increased slightly over this period. This is due to slightly lower operating levels at the mines, due to terrorist threats, labour disputes and maintenance shutdowns, and the application of the new, heavily-disputed mining law in the country. The new mining law stipulates a royalty rate of between 5.5% and 12.5%, depending on profitability, and we have applied this in our analysis.

In Namibia, costs at Rossing and Langer Heinrich have moved in opposite directions. At Langer Heinrich, the installation of the Bicarbonate Recovery Plant (BRP) has reduced soda ash consumption from 22.5 kg/t of ore in 2014 to only 2.0 kg/t by 2016. Combined with other reagent savings, we estimate that the BRP will result in reductions in cost of ~$3 /lb by 2016.

Rossing, on the other hand, has reported consecutive financial losses since 2012. Labour productivity increased in 2012 and 2013, but fell in 2014, as lower head-grades and recoveries constrained output. Approximately 2 kt of higher cost production capacity is currently idled at Rossing. Lower production did cut water consumption, but this led to a surge in unit water tariffs, due to unfavourable water off-take agreements.

The start-up of mining at Husab, owned by China's CGNPC, has increased competition for skilled labour in Namibia, contributing to strong local labour cost inflation in 2015, and both Langer Heinrich and Rossing suffered from a high turnover of staff, despite generous wage increases. The sharp depreciation of the Namibian Dollar, however, helped the companies to reduce labour costs in US Dollar-terms.

And the winners are…?
In addition to the mine-by-mine analysis discussed above, we also examined average Business Costs by mine-type and by country. This allows us to identify any divergence in the cost structure of different types of operations and in different countries. As the charts below illustrate, the low cost players in this market currently are the ISL mines in Kazakhstan and the underground mines in Canada.

Explore this topic with CRU
Want to read more? Register to continue reading and gain access to all CRU Insights
Uranium
Top