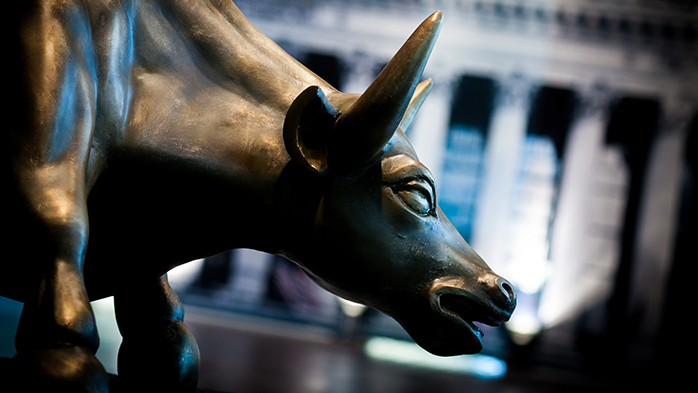 The sharp fall in world zinc mine production occasioned by exhaustions and price-induced cutbacks has been exacerbated by some very weak numbers from Hindustan Zinc in the early months of this year.


These may not have surprised the company itself, but they certainly shocked the market.  They added to the growing conviction that zinc's looming supply-demand deficit is real.  Maybe there really is insufficient supply to meet medium-term metal demand.  Maybe zinc is at last heading for the bull market that has been promised for so long.

Supporting this view, prices bounced from a January low of $1,467/t to highs of approaching $1,950/t in April.  Admittedly, this was part of a wider revival as investor sentiment switched from risk-off to neutral after firmer first-quarter data negated earlier worries about further weakness in the Chinese economy.  Admittedly too, prices have softened again of late, although zinc has continued to outperform the rest of the traditional LME metals.  Even at this early stage of the up-cycle, zinc's relative strength may already be starting to show.

2016 mine output will fall sharply
While zinc's price recovery will prevent any more mines being put on care and maintenance, it is not yet enough to prompt any idle ex-China mine to restart.  Nor will it ease developers' problems with raising finance, so short-term mine supply is likely to stay very tight. 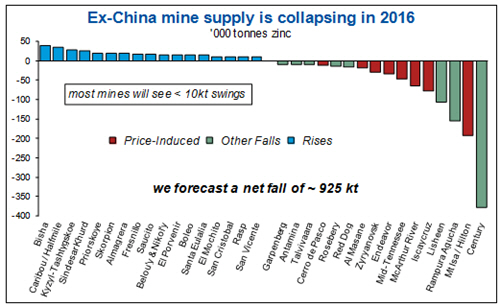 In fact, CRU's latest forecast has ex-China mine output dropping by roughly 925 kt between 2015 and 2016.  Having produced for most of last year, Century and Lisheen will both be major losses in 2016, while Rampura Agucha's problems as it transitions underground mean that this could now see the third largest fall.  If Glencore's 400 kt/y cutbacks continue throughout 2016, they will meanwhile cost a combined 365 kt year-on-year (these began in 2015 Q4), while Nyrstar's suspension of its mid-Tennessee operations will add to the 2015-16 swing too (because its other idled mines have been off stream for longer, these will merely continue to hold the production base down).  Admittedly, some ex-China mines will produce more this year than in 2015.  However, there will also be other price-induced and other falls.

Nor do Chinese miners have anything like the capacity to offset this ex-China slide.  For sure, the Chinese mines that closed on price grounds in the second half of last year are likely to be producing again now.  However, many of those that were shut on environmental grounds still require investment in cleaner recovery, and prices remain a long way below the level needed to justify that.  Even without these headwinds, the largest historical rise in Chinese mine production has been only 350 kt.  With these headwinds, we doubt that this year's rise will be more than 175 kt.

The first-quarter market may have been 0.5 Mt in deficit
Of course, supply is only one side of the zinc market balance.  However, even if first-quarter demand did no more than repeat its 2015 Q4 level, mine production in this period could have been more than 500 kt shy of the total needed to meet fabrication demand.

Admittedly, LME stocks fell by nothing like this amount in 2015 Q1, while SHFE holdings actually rose by more than LME warrants declined.  However, this was only possible through an unprecedented cut in global concentrate stocks.  The sharper seasonal variation of Chinese mine than metal output means that concentrate inventories always fall in the first three months of the year.  However, they have never previously been slashed by as much as in January-March 2016.

At its most fundamental level, the zinc market was broadly balanced between late 2009 and the end of last year.  Metal stocks rose, dipped and rose again in this period, but only because concentrate stocks were doing the reverse.  Admittedly, this followed a substantial stock build through the course of the 2008-09 recession, when producers cut aggressively but demand collapsed by even more.  However, as well as eroding more than 20% of all excess material in just three months, the first-quarter drawdown means that almost no surplus concentrate now remains.  So long as they continue, future deficits will inevitably start to erode surplus metal inventories soon. 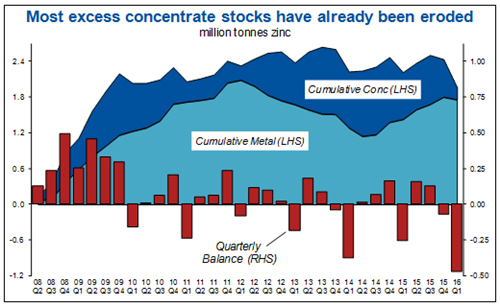 Further supply-demand deficits are forecast
Such a further fall in inventories is just what CRU expects.  Albeit perhaps not at its first-quarter rate, we expect the market to stay in deficit for a number of years.  At some point, this will indeed be very bullish for prices.  However, are there any early signals that will indicate that the market is getting tight?

Because we expect concentrate inventories to be exhausted before those of metal, this is where the earliest signs of stress will be seen.  Spot TCs will be an obvious indicator of any further tightening of the concentrate market.  However, because these are just one of three sources of revenue for Chinese smelters, they need to be read alongside metal prices (which determine the value of unpaid zinc in imported concentrate) and the strength or weakness of the arb between LME and Chinese quotations (concentrate imports are priced on the first while metal is sold on the second).

In an ideal world, we could also use data on Chinese refined output to see whether smelter cutbacks are being forced.  However, the fact that the ten largest suppliers have already announced a pre-emptive cut of 500 kt means that the evidence here may no longer be clear.  And it is no longer certain that even national totals for Chinese smelter production will be readily available.  Citing anti-corruption, the NBS and CNIA are no longer reporting these series.

Further out, metal premia have traditionally been an early indication that the metal market is getting tight.  However, these have been subject to so many other pressures in recent years that it may be hard for them to continue to play this role.  For sure, at some point, the holders of the last remaining stock will get very good mark-ups for immediate delivery.  However, this could just as easily occur through backwardations on the LME as through high spot premia.  And the path of premia in the period before then could easily be down.  Although perhaps not specifically introduced for this reason, the LME's latest rule changes could well have this effect.

CRU offers a range of services that allow market participants to keep abreast of all key changes in the zinc market, if you would like more information about the services available from CRU, please click the 'Discover our services' button below.

Explore this topic with CRU
Want to read more? Register to continue reading and gain access to all CRU Insights
Zinc
Top