How competitive are Mexican silver mines?

Following the multi-year devaluation of the peso, silver mines in Mexico have experienced marked cost deflation (in US$ terms) with costs now 9% lower than the rest of the World (RoW) on a CRU Business Cost basis.


The biggest risk to this continued competitive position is peso appreciation. Under a low silver price (US$10/oz) scenario, we would expect to start seeing curtailments globally although surprisingly -Mexican cost competitiveness or expected supply would not vary much due to the polymetallic (and insulated) nature of the large silver mines.

Mexico: Downside risk has eased so peso appreciation now likely
Since November 2016, the peso has experienced high volatility due to concerns that US protectionist policies might damage Mexican export prospects. Renegotiations to improve NAFTA got underway in August and risk of extreme action on trade by the US has dissipated to some extent. The Banco de Mexico has raised rates this year to combat higher inflation resulting from a liberalisation of fuel prices early in the year, but with inflation set to fall into the target range of 2%-4% in 2018, we don’t expect any further interest rate increases this year. At the end of August, the peso was trading around 17.80 to the dollar, up 14% since the end of 2016. This insight looks at the present cost position of Mexican silver mines along with how that position may change under a stronger peso and a lower silver price. 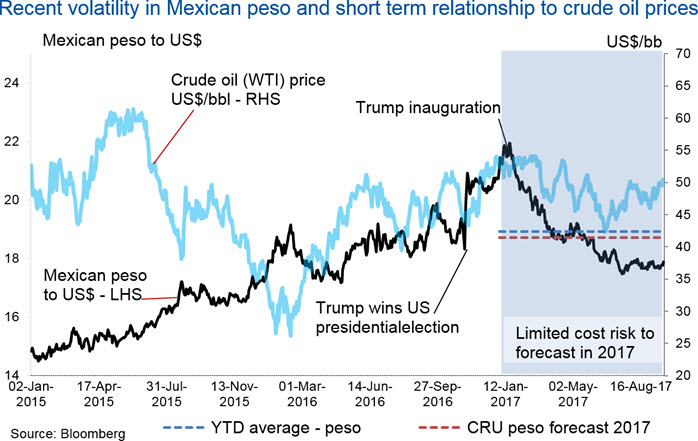 How competitive are Mexican silver mines now?
This year, we expect silver production from Mexico - which covers nearly 26% of our costed coverage - to be produced at average CRU Business costs (cash costs plus sustaining capital) of US$11.1/oz of silver equivalent (compared to US$11.8/oz for the RoW). 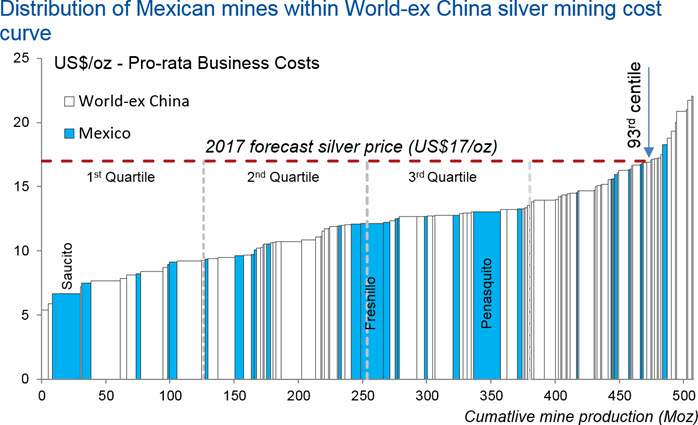 State of Mexican silver mine production – Mexican miners are concentrated between the first and third quartile of the cost curve and positioned favourably compared to the RoW. At US$17/oz prices, we estimate 7% of costed mine supply is operating at a loss this year.

Falling share of silver revenues begins to restrict elasticity of supply? - The rapid rise in zinc and lead prices this year have shifted the overall revenue structure at large Mexican silver mines and in some cases, perhaps begun to have an effect on mine planning. At Fresnillo for example, mining continues to transition into higher grade zinc (and lead) and relatively lower grade silver which reduces the overall share of silver revenues and therefore apportioned pro-rata costs at the mine. Similarly, Penasquito is currently going through a stripping phase and is expected to access portions of the Chile-Colorado pit by 2019, resulting in higher zinc and lead grades expected to be processed there too.

Scenario analysis: Peso strengthens to 14 and silver price falls to US$10/oz
While our base expectation is for the peso to continue to appreciate and average 16.80 to the dollar by 2021, we look here at what affect peso appreciation and a silver price fall might have on the competitive position of Mexican silver mines. Over the past half decade or so, the peso has shown an important inverse correlation to the price of oil. 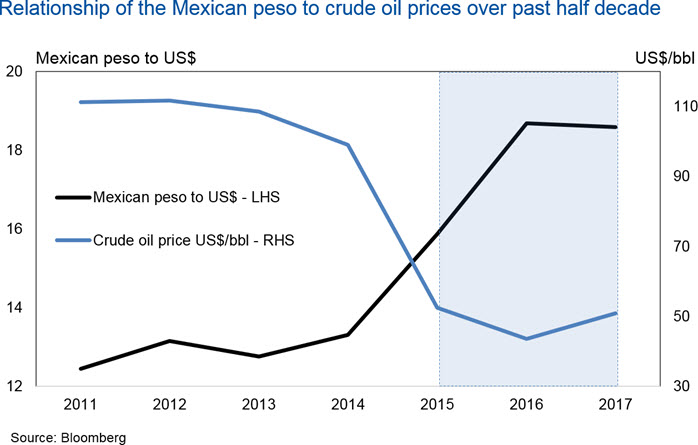 Scenario 1: Mexican peso strengthens to 14 – Here we look at a scenario in which the oil price recovers at a faster rate than we anticipate and the peso recovers to levels last seen in 2014, prior to the crash in oil prices.

Under scenario 1: where the peso strengthens to 14, a significant portion of Mexican mines shift into the third and fourth quartiles of the cost curve. The overall competitive position changes from a 9% advantage under our base case to an 11% disadvantage. Average CRU Business Costs for Mexican miners in this scenario rise to US$13.5/oz silver equivalent (compared to US$11.1/oz under our base case). This suggests that Mexican supply elasticity (and perhaps curtailments) could be most acute under a rapidly strengthening peso environment.

Under scenario 2: where silver prices fall to US$10/oz, most Mexican mines see a relatively small deterioration in their competitive position on the cost curve. With some mines such as Penasquito showing a relative improvement on the curve. At these price levels, nearly 17% of the World-ex China silver mines would be loss-making on a CRU Business Cost basis and global supply would undoubtedly begin to be affected. Somewhat surprisingly, very little disruption would occur to Mexican supply.

While Mexico has often been regarded as a source of ‘primary’ silver mines, the changing economic landscape along with a resurgence in zinc and lead prices this year have resulted in many of the largest silver mines in Mexico being better described as polymetallic mines which are somewhat insulated to silver price movement. This suggests mines in Mexico would continue to supply silver even under dire (US$10/oz) silver price scenarios. The Mexican silver mining industry would put under most pressure in a scenario where the peso began to strengthen rapidly.