How do acid prices affect smelter revenues in different regions of the world? 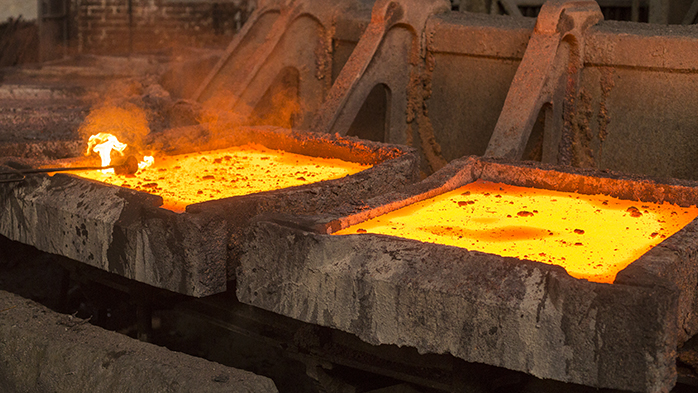 The global sulphuric acid market has shown a declining price trend since 2011, as sulphur prices have fallen and the traded acid sector has tended towards oversupply. In both 2013 and 2015, FOB East Asia and FOB NW Europe have had prices at negative FOB levels, reflecting delivered acid prices not covering the cost of delivery to the customer.

The global trend of decline in acid prices has cut the average revenue from acid at smelters but this effect has not impacted all smelters to the same degree. The factors that affect the scale of change in revenues are the share of acid sold to export vs. domestic markets and the relative pricing of those export and domestic market.

Domestic market prices are typically more stable and follow a longer term trend whereas traded market prices have a higher degree of volatility. For example, the domestic contract price for acid in NW Europe has fallen between 2011 and 2015 by 41% where as the NW Europe export price has fallen by 76%. The differences are more significant when looking at the extremes of the price ranges since 2011. 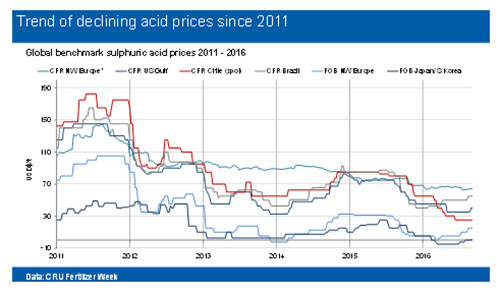 Market price volatility is only one factor that affects smelter revenues from acid. The other factor is the exposure to domestic and export markets. Domestic markets are more stable prices and show less variance within a given year. Smelters with a greater share of sales within the domestic market have more stable and generally higher revenue from acid sales thank exporting smelters. NW Europe, Japan, South Korea and SE Asia are the major smelting regions which are actively engaged in the international sea borne trade of sulphuric acid. In contrast, Chile, India and China are markets which have the major share of sales into domestic markets. The effective price a NW European would have achieved in 2015 could have ranged from $75/t to $26/t depending on whether all sales were placed domestically or in export markets. The variance in realised prices has increased in 2016 due to the weakness in the global traded acid market. In Europe and Japan/South Korea there have been negative FOB prices whilst domestic markets have remained stable. This causes average realised prices to fall faster as some sales to the export market have actually made a negative contribution to revenues.

Acid price volatility has caused its share of global average smelter revenues to vary. The chart below shows the breakdown of smelter revenues by revenue stream for the global average annual revenues. Since 2007, global smelter revenues have increased; however, the contribution made by acid has varied from 47% to 15%. At times of high global acid prices revenues from acid increase and at time of low global acid prices revenues fall. However, as discussed already the impact extent of the impact is variable depending on the market in while the smelter is located. 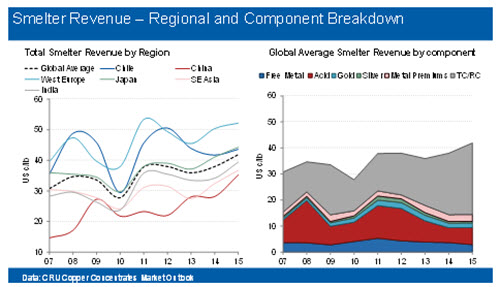 Revenue impact of acid price variance
Price in the internationally traded market can move up on the basis of improved demand or a supply disruption but prices in domestic markets remain unchanged as these prices are set on a contract basis. So the structure of sales at a smelter can therefore translate into an exposure to price risk. Domestic prices can remain fixed whilst international price move which allows the analysis of how changing international prices differentially influence acid revenues in different regions of the world. The analysis uses actual annual prices for export and domestic markets in 2015 with the international price benchmark varied to assess the revenue impact. An international delivered price of $80/t CFR can be related to an FOB price in a supply region by subtracting the freight. The analysis below looks at varying the delivered price up and down by a given percentage and calculating the change in implied FOB prices by subtracting the freight. The differential impact on the change in revenue comes from the share of sales that each smelter region has in the international market. 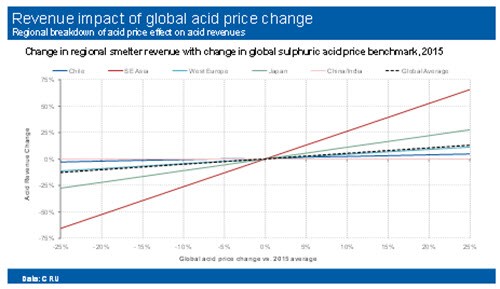 Chile, India and China, which have little or no exports, show essentially no change in revenue as international prices vary. In SE Asia, which as a region where the major share of sales exports, revenues change significantly. With a 25% increase in the global benchmark price acid revenues in SE Asia increased by 66%. This increase seems dramatic but it is partially a function of SE Asia having a particularly low acid price in 2015. West European revenues increased 11% for a 25% increase in the global benchmark with Japanese revenues increasing by 28%. The analysis is intended to show how the impact acid prices at a point in time vary by region but in reality domestic market prices would move up or down if the international market prices remained depressed or elevated for a significant period of time.

There is significant potential for acid prices to move within a given year and therefore there is significant potential for smelter revenues to vary but the variance more likely in certain regions. China, India and Chile are most insulated from international price volatility due to either the large, and self sufficient domestic markets in India and China, or the annual contract pricing structure in Chile. In contrast, West Europe, Japan and South Korea show significant change in acid revenues on both an annual and quarterly basis. In the near term, the market balance looks to be favouring prices in domestic markets over international markets and therefore having a less negative revenue impact on domestic focused smelter regions.