India: Demonetisation of currency and its implications 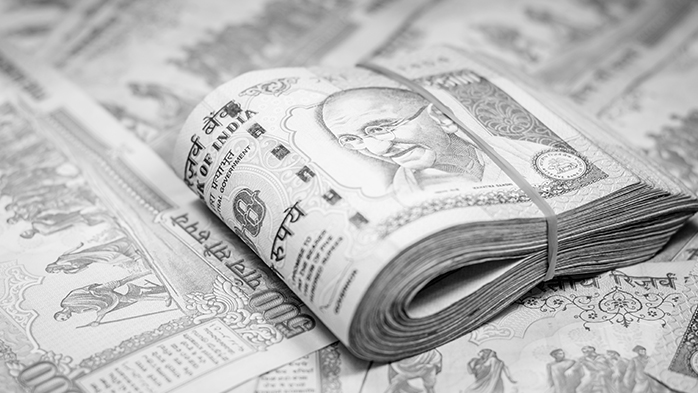 On 8th November 2016, the Government of India demonetised INR 500 and 1000 currency notes, the highest denominations in the country at that time, with effect from the following midnight.

While those notes ceased to be legal tender with immediate effect, the government has allowed up to 30th December 2016 for these currencies to be exchanged with new notes (only up to a certain small amount) or to be deposited in bank accounts (with no limit on amount deposited).

The three principal reasons cited by the Government for this move were the following:

Counterfeit currency and its misuse
According to the Government, fake currency is entering the economy mainly through the country's porous borders with its neighbours and Fake Indian Currency Notes (FICN) in circulation in these denominations are much larger as compared to those in other denominations. Not only do these counterfeits weaken the economy, they also act as the cheapest source of financing anti-national and other subversive activities in India, including terrorism, drug trafficking and smuggling of arms into the country.

Black Money
Black money in India refers to the unaccounted wealth generated through transactions deliberately executed outside the taxation system or through other illegal activities such as corruption or under-invoicing. Most of the black money is hoarded in these high-denomination currency notes (that have now been invalidated), as was noted by enforcement agencies in their investigations. The announcement to demonetise the currency notes was sudden only in order to ensure that unaccounted wealth is not siphoned off via other channels such as gold or real estate property.

The presence of black money in the country creates a parallel (or shadow) economy which is outside the purview of the government, leading to loss of tax revenues. This money is also not subject to other instruments normally deployed to steer the economy, say, interest rates.

The government has already declared that information on all cash deposits above INR 250,000 in the banks will be shared with tax authorities and deposits for which income cannot be accounted will be taxed at the applicable rate as well as penalised at 200%. As such, 60% of all black money deposited in accounts will be collected by the government as taxes.

The government will also benefit in the scenario that certain amount of black money is not deposited in the accounts due to fear of prosecution and is allowed to be rendered useless. Every currency note represents an obligation on the part of the central bank and therefore any unreturned currencies would imply an equivalent amount offloaded from the central bank's liabilities. The central bank can then proceed to transfer the excess amount as dividend to the government, as has been the practice in recent years.

Demonetisation is expected to uncover more black money and generate higher revenue via taxation and penalties than the IDS.

The government has also cited its intention of targeting benami transactions. In this regard, it has already amended the Benami Transactions Act this year to give officials more authority in dealing with such cases. A benami transaction is one where a person holds a property but another has paid for it.

Short Term Impacts
The growth in the economy will slow down in the short term.

Cash Economy
India is predominantly a cash economy, with majority of the transactions carried out by payment through currency notes. The sudden move (of demonetising INR 500 and 1000 currency notes) has left bulk of currency in the country worthless, with not enough currency in smaller denominations available. While non-cash transactions using debit or credit cards, online banking or funds transfer, mobile wallets, etc. are still allowed as before, the cash economy character implies that most citizens rely on currency notes for carrying out basic transactions. This is especially true for the rural areas. While the government is replacing these notes with new currency notes of INR 500 and 2000, there is initially a cap on amounts to be exchanged thereby causing a disruption in cash flow in the market.

The extent of the cash economy can be gauged from the government's Jan Dhan scheme launched two years ago, aimed at bringing banking and financial services to the majority of the population which then did not have access to a bank account. Almost half of these newly opened accounts under this scheme have since been dormant, with no deposits. Share of these accounts in total deposit base of the banking system has remained under 1%.

With limited cash availability, consumer spending has drastically fallen and is expected to slow down in the medium term. This will negatively impact growth in the economy over the following two quarters. The action the government takes on the black money deposited in bank accounts will also influence sentiment in the market. 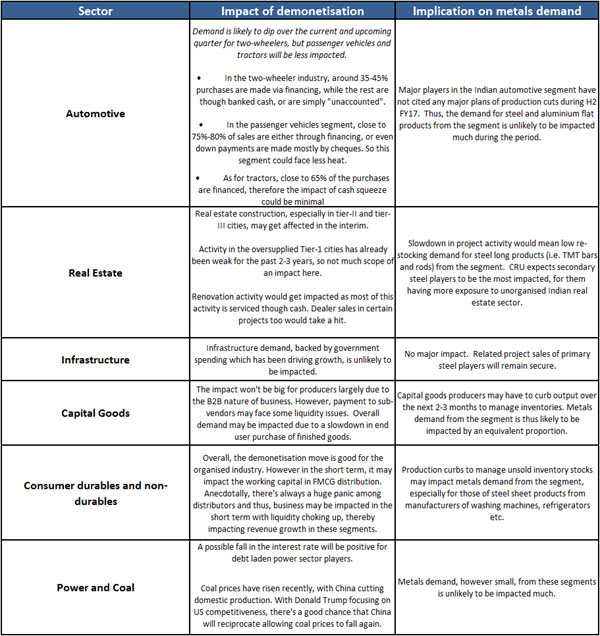 Long Term Implications
Demonetisation is arguably the most significant and direct initiative to combat the menace of black money and its parallel economy taken by the Indian government. As most of the black money hoarded in cash gets wiped out of the system, significant impacts will be seen in the economy with likely effects on key macroeconomic variables as fiscal deficit and interest rates as well as certain sectors where black money is prominent.

Gold and real estate transactions have traditionally been used to siphon off black money from the system and, thus are likely be most adversely impacted.

Gold
Cash transactions, including those of high-value, are common in the Indian gold market which is considered a safe haven for converting black money into asset. The demand for gold from those hoarding black money at home is likely die out, in the near term.

But, in the medium term, there is a possibility that loss of trust on paper currency could incentivise any black money generated in the future to be immediately converted to gold, thereby increasing sales and resulting in higher imports.

Real Estate
Deals in the Indian real estate sector (primarily in residential real estate) are carried out with part cash and part cheque transactions. The former is usually black money, which neither party brings on to its books. The builders/constructors also tend to prefer black money as a source of funding because formal channels of funding are usually costlier, considering the taxation involved. With this crackdown on black money, the real estate sector is expected to witness a slowdown and stabilize at lower price levels.

Further, a fall in real estate sales/bookings is likely to discourage investments in new residential and commercial real estate construction projects by builders. This will eventually impact off take of building material (primarily cement and steel reinforcing bars) by the sector.

Inflation
In the near term, decrease in cash spending will bring down the pressure on prices, lowering inflation. In the longer run, a more structural change in the form of lower generation of black money and tighter monitoring by government agencies of the gold and real estate sectors should ease inflation further.

Revenue generation
One of the key benefits of the unearthing of black money will be the revenue generated from taxes and penalties imposed on such undisclosed income. Calculations reveal that this revenue could be significant - even almost as much as the fiscal deficit of the government for the entire year.

Such a substantial windfall could be used to lower the fiscal deficit and also increase spending on social schemes for the benefit of the common man and the economy at large. In the long term, transparent transactions and improved tax compliance will increase government revenues from both direct and indirect taxes. Finally, a diminished parallel economy would bode well for the formal economy.

Lending rates
With Rs. 17,000 billion worth of currencies demonetised, this amount will return to banks. While a portion of it will be immediately exchanged and some possibly allowed to become invalidated, the majority of this amount would end up as deposits in banks, flushing the banking system with liquidity in the near term, which can set off a notable fall in lending rates.

Finally, lending rates could also be driven down by a decrease in demand for consumer goods in the rural economy, in the immediate aftermath of decrease in cash currencies in circulation.

A fall in fiscal deficit due to revenues from taxing and penalising black money, or from a reduction in liabilities of the central bank due to currency not returned, would lead to lower government borrowing and free up liquidity for market lending as well as lower yields on government securities.

Corporate India has time and again complained the higher cost of capital as the reason behind their operations and projects being unviable and the banks are plagued with non-performing assets. As such, a lower lending rate could bring such projects back on track.

Effect on currency
As cash is in short supply, the currency may appreciate in response. Lower levels of inflation would also have the same effect. This is likely to have a negative impact on trade. Counter moves by the government are expected to ease this. However, the currency will also move subject to non-domestic factors, including if the US Fed moves to hike rates.

Less-Cash Economy
The central bank and the finance ministry have officially stated their policy of reducing the cash dependency of the economy on several occasions in the past. Several efforts have been made towards increasing e-transactions through online transfer, internet and app banking, mobile wallets, credit and debit cards. At the other end of the spectrum, a national programme to universalise banking services and direct credit of various subsidies has been fairly successful.

The recent demonetization will boost the move towards a cashless economy and reduce demand for currency in the medium term. The financial technology sector will be most benefited from such a move.