The prime motive here is to replace MIP (considered an emergency trade protectionist measure) to a sustainable long term trade barrier while there being minimal criticism from global trade community, especially the countries with which India has trade partnership agreements.


Latest updates on imposition of trade barriers in India
In the Indian steel market, the MIP on imports has been extended two times since the initial date of expiry (i.e. 4th August 2016). MIP Phase I (5th February - 4th August 2016) was followed up with a pruning of the list of products under MIP to 66 steel HS codes (from 173 in Phase I) in Phase II (5th August - 4th October 2016). Of the excluded products, anti-dumping duties were imposed on HR and CR coil imports in August. In October, the government decided to extend the Phase II further by two months to 4th December 2016. Concurrent anti-dumping and safeguard investigations are ongoing for most of the steel products covered under MIP protection. In December, CRU expects that provisional anti-dumping duties will be announced for alloy & non-alloy wire rods (originating from China) and color coated sheets (originating from China and the European Union). At the time of going to publication, the Indian Directorate General of Anti-Dumping and Allied Duties was in the advance stages of recommending these duties.

Effectiveness of trade protectionist measures and their impact on local steel sheet prices
As can be seen in the chart that follows, trade protectionism in the form of MIP has proven to be quite effective in curbing import of finished steel products in India, although facing a lot of criticism in the global trade forums. This trade barrier allowed Indian steel producers to hike domestic steel prices in the first three months of MIP imposition. However, low offtake from end users in June and July forced mills to roll back most of these price increases. The months of August and September saw better end use demand from consumer durables and automotive end use segments, which were ramping up output to build inventory for upcoming festive sales period in October. Meanwhile, seaborne coking coal prices rose abruptly following China's announcement of coal production curbs and supply bottlenecks in Australia. These two developments (while there being trade barriers in place in the form of MIP and anti-dumping duties) have allowed Indian mills to incorporate further rounds of price hikes in the months of September and October. 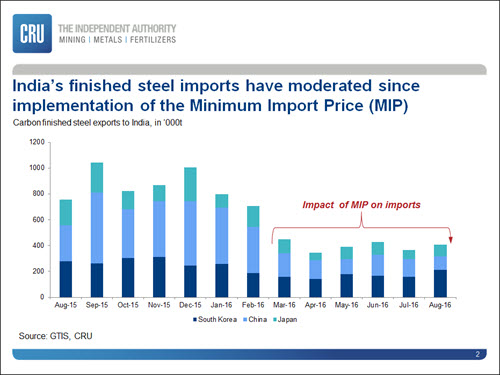 CRU understands that the latest round of price hikes in October are not sustainable, for there being voices of dissent from various consumer associations. It is also to be considered that Indian government is due to take a decision on extension of the provisional anti-dumping duties on HR and CR coils sometime in January-February 2017. Thus, it is essential for domestic steel producers to align with the expectations of key end users so that the anti-dumping duty extension is not contested by consumer associations