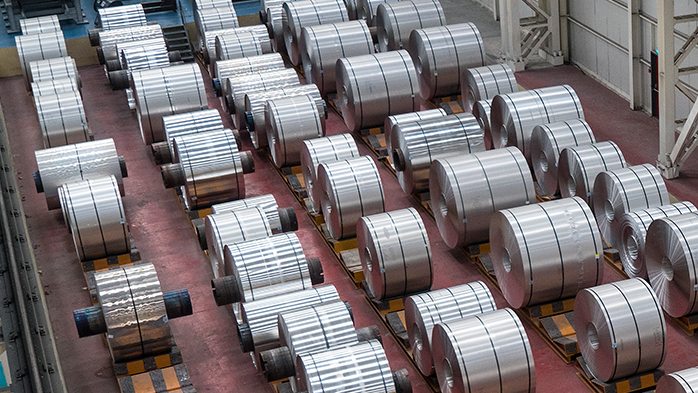 Competitiveness in the rolled products sector has never been so intense, with Chinese rolling capacity having increased incredibly fast over the past decade.


Producers outside China have sought to move out of low valued added products and at the same time increase efficiencies to maintain their margins.  Growth in high value added products such as aircraft plate and auto body sheet (ABS) has helped players who focus in these areas, and where Chinese mills have yet to penetrate.  The following Insight looks in detail at the drivers of costs in aluminium rolling and how the major companies have fared in the face of a challenging competitive environment.

There are four key factors that contribute to determine an aluminium rolling mill's costs of production, and hence its competitiveness: mill equipment, product mix, raw material mix, and mill location (i.e. macroeconomic factors).  Having detailed knowledge of these four key components of any rolling mill is an essential part of assessing that mill's cost position relative to its peers.  Obviously, making the best use of its existing resources is key, but beyond that, how does an individual producer gain competitiveness?

CRU's Aluminium Rolling Cost (ARC) model
CRU's unique Aluminium Rolling Cost (ARC) model is ideally designed to bring these four factors together to provide detailed cost analysis on a mill-by-mill and product-by-product basis. Aluminium rolling costs can be assessed throughout the full process flow, from raw material input, through casting, rolling, finishing, packaging and delivery to client. They can also be disaggregated according to the type of cost, e.g. labour, energy, materials, overheads, etc.

CRU's ARC model allows the user to input or change a large variety of parameters in these four areas, in order to flex these important input variables. For example, the user can adjust the primary processes involved in rolling as well as the economic environment within which each mill must operate. The ARC model allows the user to directly analyse their impact on costs, both on a plant level and a company level, as well as the shift in a mill's position amongst its competitors. ARC's coverage of total world production of aluminium rolled products remains at over 90%.

Another key advantage of the ARC tool is to understand how and why a rolling mill or company can be competitive, based on the types of facilities in place and the products produced. It is important to recognise that the components of rolling costs are interactive, i.e. one component might be low/high directly as a result of another being high/low. As an example, one plant might have a high raw material cost because it brings in hot band rather than primary ingot and scrap. As a result, its conversion costs will be much lower than other mills (that start with primary ingot and scrap), since it will not need to process the raw material through the casting and hot rolling stages. Another example is where a mill chooses to exit the hot mill at a thicker gauge (relative to another mill). This means less hot rolling, but more cold rolling is required. The cost structure at the rolling mill will reflect this. A producer will often choose to push a greater proportion of costs into one basket in order to optimise the overall cost structure at the mill. Indeed, some producers choose to transfer rolling slab, hot band, and/or cold rolled coil between facilities in order to optimise the equipment use and lower production costs across multiple mills.

Indeed, as seen in the adjacent table, average EBITDA margins for most of the major aluminium rollers which report such data, there are very few genuine high fliers or stragglers amongst the major rollers. Further analysis into these reported numbers, which for the majority are reported on a quarterly basis, shows that the standard deviation across the 5-year time-span shown is low, much lower than 20%, indicating a remarkably consistent rate of return. The producers are finding a variety of ways to achieve this. By way of example: 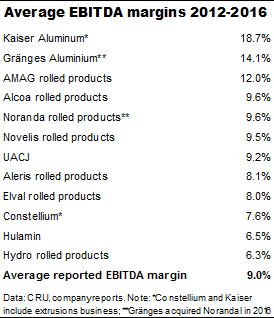 Conclusions
The aluminium rolling industry has had to work hard to slowly improve itself in recent years, with growing competition and squeezed margins. Many of the major producers outside of China have had to focus their energies and investments towards higher value and niche products, as extremely strong investment in China's rolling capacity has led to a flux of exports. However, despite the relatively high margins achievable in the production of e.g. automotive and aerospace products, even these categories of products are currently suffering from falling margins.

Looking ahead, China is expected to become more competitive in many product areas. CRU's cost analysis shows that China will have improved cost structures, due mainly to improved efficiencies, as well as improved economies of scale. As a result, the other producers will need to continue to innovate, invest, merge, de-merge and shift targets, very much as they have been doing for many years.