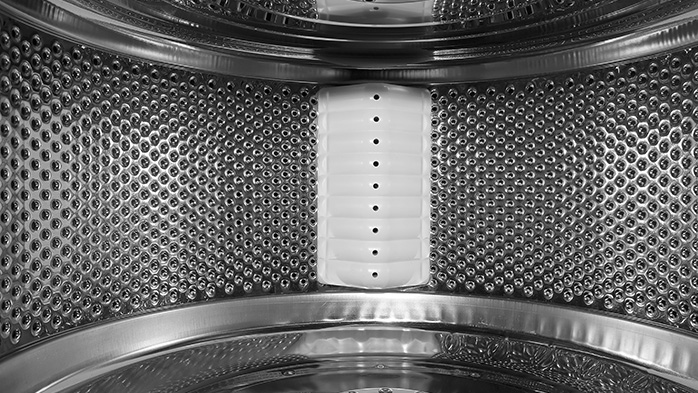 Tsingshan Group recently began shipping stainless slab from its newly-commissioned fully-integrated plant in Indonesia. In order to accommodate the ramp up in Indonesia, Tsingshan is reducing its stainless steel output at its Chinese plants by converting some of its mainland capacity to carbon steel production.


These developments raise questions about both the company’s strategy and the future interplay between Indonesian and Chinese stainless steel production. Tsingshan could have the capacity to produce almost 10 Mt/y of stainless steel before the end of 2019, which would make it capable of supplying almost 20% global demand. That scale, plus the ability to shift production between Indonesian and Chinese production bases depending on the relative strength of domestic Chinese and export markets for stainless steel, enhances Tsingshan’s competitiveness.

Tsingshan’s Fujian-province based subsidiary is also understood to be planning to switch some stainless steel capacity to carbon steel output in the near future. The company has blast furnaces at that location that can quite easily produce pig iron for carbon steelmaking. 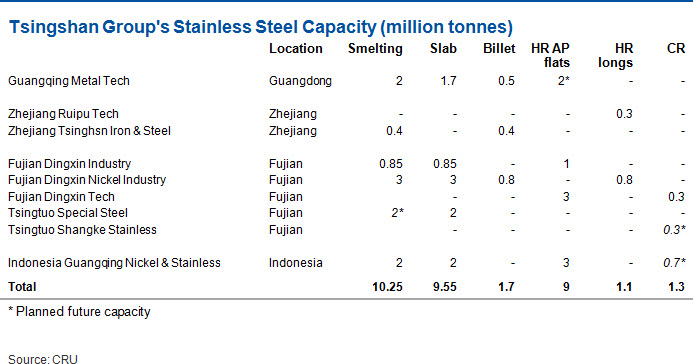 Explaining Tsingshan’s capacity moves
Tsingshan Group’s choices to realign capacity reflect some of the capacity bottlenecks that currently exist in its structure. Most importantly, the group is currently deficient in hot-rolled annealing and pickling (HR AP) capacity, all of which is located at its plants in Fujian province, in eastern China. HR AP capacity totaling 2mtpy is due to be commissioned at Guangqing Metal Technology between mid-2018 and 2019. In addition, Tsingshan’s Indonesian plant will have its own 3mtpy HR AP plant in future—trial production has taken place on this line, but more work is required to ensure quality standards are met.

As a result, stainless steel slab produced at Guangqing and the Indonesian plant currently needs to be processed at the plants in Fujian province, which adds to production costs. From this perspective, it appears as though the switch to carbon steel production at Guangqing has been necessary to free up HR AP capacity for the processing of slab from the Indonesian plant. CRU does not expect this arrangement to last too long. Tsingshan Indonesia is likely to stop shipping slab to China within the next 3 months, and instead produce HR coil locally.

A short-term move to carbon steel production at Guangqing also makes sense from the perspective of raw material flows. Guangqing obtains around 40-45kt of high-grade NPI supply on a monthly basis from three local NPI plants (one of which is integrated with the steel mill). This is insufficient to meet nickel requirements when the plant is operating at full capacity, when it needs to buy in NPI from the Chinese market and from Indonesia. With Tsingshan’s Indonesian plant now consuming NPI itself, less of that material is potentially available for Guangqing.

Finally, it is currently a reasonably favourable time for Guangqing or some of Tsingshan’s Fujian plants to begin carbon steel production. Carbon steel production has actually been making better gross profit margins than stainless steel for some months. This could of course change soon. Nevertheless, China’s current carbon steel market is by no means as unattractive for a new entrant as one might assume.

How Tsingshan’s production strategy could look?
CRU believes the switch to carbon steel production at Tsingshan’s Chinese plants is likely to be a temporary response to capacity bottlenecks brought to the fore by the commissioning of the Indonesian stainless steel complex. Once this current bottleneck is resolved, however, another one may develop when Tsingtuo Special Steel, a Tsingshan subsidiary also based in Fujian province, begins commissioning a 2mtpy slab plant in the second half of 2018.

We believe Tsingshan will by this time still be short of around 1mtpy of HR annealing and pickling capacity. As a result, it will be faced with the choice of either setting up a new HR AP line or else using some of its melting capacity to produce carbon steel slab, which could be sold to local re-rollers for further processing.

Will Indonesia displace Chinese stainless supply?
The potential conflict of interests between Tsingshan’s Indonesian and Chinese plants is currently being influenced by two specific factors. Firstly, Chinese stainless steel prices are firmer relative to overseas markets than they have been for some time. Diverting supply from Indonesia to the Chinese market therefore becomes a viable option, at least in the short term. Secondly, international buyers will take time to accept material from Tsingshan’s Indonesian plant. Given this, China temporarily becomes a market of last resort for the Indonesian material produced during the plant’s ramp up phase.

CRU does not expect the Chinese stainless steel market to remain attractive indefinitely. Moreover, we understand that Tsingshan is allowing around 3-4 months to address quality concerns and to prepare for direct sales to international markets, thereby bypassing the Chinese market. On this basis, we believe that Tsingshan will largely try to avoid transferring stainless steel from Indonesia to China by year end.