Do commodity prices matter in Central and Latin America?


Commodity prices critically impact economic and budgetary conditions in resource rich countries, but are highly volatile. Rigorous scenario analysis is key to assessing and planning for such price risks, particularly in sub national regions where resources are most concentrated (and the economic impacts are least understood). Using a unique data set prepared for the Inter American Development Bank, CRU present ground breaking research into these issues for a broad sample of mining regions in Central and Latin America.

Mineral prices fluctuate widely... CRU’s Latin American Composite Commodity Price Index, for example, fell by around 40 percent between 2011-2015 (see Figure 1). This is due to a strong relationship between economic growth and metals demand (a high “income elasticity”), and extended lead times between the onset of higher prices and the arrival of new production volumes. This low short and medium run price elasticity of supply reflects inherent delays bringing new investments to market.

…which raises significant challenges for policy makers in resource rich countries. This is because mineral production takes a large share of exports, and are a critical source of public revenues, foreign direct investment and employment. These problems may be still more acutely felt among sub national regions where resources are most heavily concentrated. However, these local economic effects are generally weakly understood given the scarcity of relevant data. 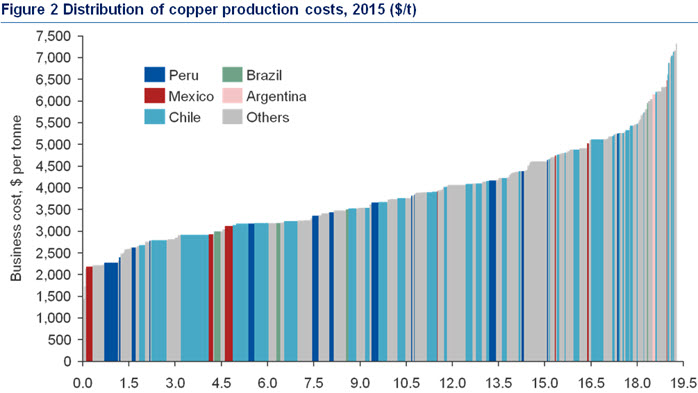 Our analysis identifies a significant risk of negative free cashflows in the low price scenario, particularly in Northern Chile and Southern Peru (shown in Figure 3). We also find a significant deterioration in industry cash positions in Northern Colombia and the Brazilian regions of Minas Gerais and Para. Across the sample as a whole, aggregate free cash flows amounting to more than $32 billion in 2015 are found to deteriorate to just $4 billion in 2020. This represents a 90 percent reduction compared to the baseline (and has concerning implications for fiscal revenues discussed further below).

Production volumes are found to be relatively insensitive to price fluctuations…Adverse market conditions could force mine shutdowns2: a roughly 30 percent fall in copper prices compared to the baseline, for example is found to reduce output in Northern Chile, for example, by around 3-5% in 2020. In other cases, where investment projects are already committed, the “supply elasticity” is found to be significantly lower (effectively zero in regions such as Para, Brazil over the time period analysed).3

By contrast, investment is highly susceptible to changes in market conditions. Under the baseline scenario, new development capital is expected to grow from $1.2 to $5.4 billion between 2016 and 2021 in Northern Chile, for example. However, under the downside price scenario – employing CRU’s proprietary bases and market leading “Gateway” methodology for appraising uncertainty surrounding future mining projects – we find that investment could fall by over 75% compared to the baseline (shown in Figure 4).

Mining is show to be a hugely important, but highly volatile, source of public revenues. Overall, the industry contributed $12.3 billion in government revenues across the sample in 2015 (the size and composition of revenues by individual region is illustrated in Figure 5).4   However, total receipts are projected to collapse to $6.9 billion in 2020 in the low price scenario. This represents a 60 percent fall compared to the baseline.

Revenues are shown to be more stable in fiscal frameworks geared towards production based royalties. In Northern Colombia, for example, where such levies account for around 45 percent of revenues, total receipts fall by 60 percent in 2020 in the low price scenario (compared to the baseline).5 In Northern Chile, by contrast – where both revenues and royalties are profit based – revenues are almost completely eroded in 2020 under the low price scenario.

Summary
Rigorous scenario analysis is desirable to properly appraise, and plan for, the economic and budgetary risks from commodity price volatility. In this context, we show that production is relatively insensitive to price fluctuations, compared to cash positions and investment: in the case of Chilean copper mining, for example, production in 2020 falls by 3-5 percent in our downside scenario compared to the baseline (while investment falls by over 75 percent).

The structure of taxes critically impacts the resilience of revenues to weaker commodity prices. Corporate profit taxes, in theory at least, do not distort investment, but increase revenue volatility (since production costs are less flexible than prices). Our analysis thus provides rich evidence concerning the trade-off between efficient and predictable resource taxes (see Daniel and others, 2010 for a helpful discussion of the issues).

Some key questions arising from our analysis include:

Sell all of our consultant team