Mongolia slowly but surely digging itself out

Mongolia, a country with abundant mineral resources but with so much unfulfilled potential, appears to be slowly digging itself out from its economic woes, and most importantly restoring investor confidence.

In this CRU Spotlight, John Johnson, CEO of CRU China who has been visiting Mongolia regularly since 2009, explains what has changed in recent times following a recent visit.1

Earlier this year, Mongolia was in danger of defaulting on debt repayments and investor confidence was extremely low. Mongolia turned to the IMF for support, and already there are encouraging signs that the country is turning a corner. The Mongolian economy has stabilised and investor confidence is slowly being restored. While Mongolia has benefited enormously from exogenous factors such as rising commodity prices and China’s supply-side cutbacks, it is also important to note that improvements have occurred as a result of changes in government policy. Not all of Mongolia’s structural problems have been solved, but CRU thinks that it may have passed a turning point.

This should be of interest to the international mining community keen to unlock Mongolia’s considerable mineral potential.

Positive developments in 2017
What positive changes have occurred in Mongolia recently? In 2016, Mongolia’s external debt was 218% of GDP, its fiscal deficit was 20% of GDP, foreign exchange reserves were tumbling, and the Mongolian Tugrik was one of the world’s worst performing currencies. Foreign debt payments were due, and there was a high risk of default. Furthermore, foreign direct investment (FDI) was tumbling and the mining sector was struggling, having been through a period of several years of low prices and falling export volumes.

Fast forward one year later to 2017 and the IMF implementation of a $5.5 billion Extended Concessional Loan Facility appears to have marked a new beginning. Government actions, including fiscal transparency, tax increases and monetary tightening, have started. The budget deficit has been cut, foreign exchange reserves have been replenished and the Mongolian currency has actually started rising again. Bond payments have been rolled over, a new bond offering launched and real GDP growth has recovered from almost zero in 2016 to 5.3% in H1 2017.

Increasing commodity prices and export volumes have clearly helped, since export revenues have increased significantly. In particular, the Mongolian economy has been boosted by an increase in prices for coking coal during 2017, with coal overtaking copper as the largest revenue earner, which was also aided by the collapse of North Korean coal exports to China. Mineral exports are important to the Mongolian economy, accounting for more than 30% of GDP.2 Furthermore, approximately 90% of these exports are destined for China, so Mongolia’s prosperity is unavoidably linked to China’s commodity imports. 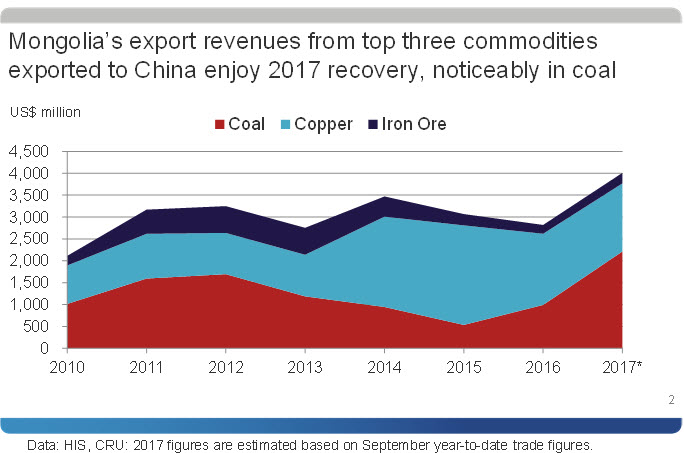 Restoring investor confidence is a government priority
Although the economy appears to have stabilised in the short term and the government has introduced some positive policies, more structural reform is required. At a conference in Ulaanbaatar attended by John Johnson in September of this year, the then Prime Minister, Erdenebat, indicated that the most important objective is to promote foreign direct investment, but this has yet to materially pick up. The Prime Minister also reported that the government is planning to resolve road blocks to delayed projects, most notably in mining and infrastructure.

One of the most important developments for the international investment community has been the Mongolian government’s willingness to restore investor confidence. Uncertainty concerning administration, interpretation and enforcement of existing regulations was one of the biggest obstacles for investors. In order to address this issue, one tangible government policy is the creation of the Investment Protection Council (IPC) in 2016, which is a “one-stop shop” for investors. The IPC consists of senior government officials and interested stakeholders from the international community.

The IPC’s main purpose is to protect investors with more transparent processes and time lines for settling investment disputes and improving the investment framework. Already more than 80 grievances have been heard and new proposals made to simplify mining license procedures. The IPC will join international forums on investment such as the Investor Competition Forum in Vienna in November. It is relatively early on in the lifetime of this new shift in Mongolian policy to assert the success of the IPC, but it clearly represents a move in the right direction designed to encourage FDI.

It will take time for international investor confidence to return. In the 2016 Fraser Institute Survey of Mining Companies about perceptions of investment attractiveness, Mongolia ranked 87 out of 110 mining jurisdictions. Most importantly, the international investor needs to know that projects are making money and will not be a cause of local resentment. Towards this end there is a pipeline of major projects, including the Oyo Tolgoi underground copper-gold mine, Tavan Tolgoi coal mine, new power plants and rail projects, which should provide such evidence, but these will take time to be successfully developed. 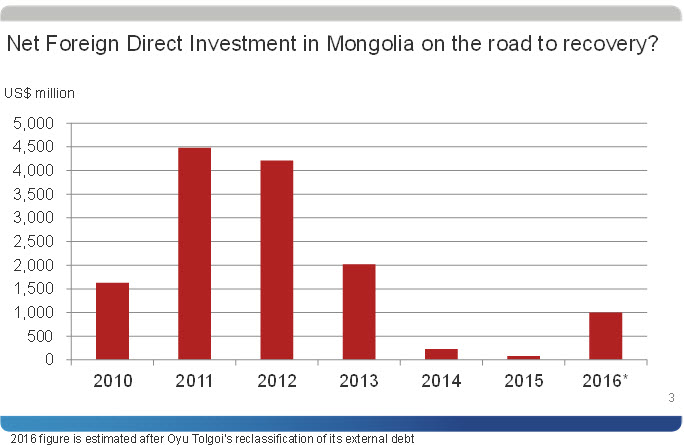 The Oyo Tolgoi copper-gold underground mine project, owned 66% by Rio Tinto and 34% by the Mongolian government, is by far the largest flagship project proceeding at the moment, with more than US$6 billion invested so far, and current investments being made at a rate of more than US$1 billion annually. This project employs more than 11,000 workers and has additional spin-off benefits for the Mongolian economy. Underground production will begin in 2020/2021, when the export revenue benefits to the Mongolian economy will be enormous.

Further structural changes required
Mongolia is a land-locked country and infrastructure remains one of the biggest challenges. Projects to pave roads are progressing, but Mongolia is still ranked relatively low in global measurements for infrastructure. In the 2016 Fraser Institute Survey, Mongolia ranked 97 out of 104 jurisdictions based on perceptions of infrastructure.3 In particular, further advances in the rail route from the Tavan Tolgoi coal mine to the Chinese border remain stalled and this creates a considerable bottleneck. Such a rail connection could potentially reduce coal transport costs by at least $10/tonne, thereby increasing Mongolia’s competitiveness, and facilitate raising coal export capacity on this route from 45 to 65 million tpy.

Meanwhile the relative weakness of Mongolia’s banks compared to the overall size of the economy and the large amounts of capital required to fund Mongolia’s growth continue to act as a constraint. Much remains to be done, since Mongolia still has a low sovereign debt rating. The IMF has expressed satisfaction with the results of its first “inspection” which took place in early August, meaning that the monies from Japan, Korea, the World Bank and the Asian Development Bank should also be forthcoming. China has rolled over swap-lines, too. Few obstacles are expected to the release of the next tranche of money from the IMF in December, pending meetings between the IMF, the new Prime Minister and the new cabinet.

Other trends may boost Mongolia further, such as China’s Belt and Road initiative and rising global commodity prices. However, Mongolia must avoid the complacency that can come with higher commodity prices. Diversification away from mining is considered a key priority by the government, but profits are likely to be required from mining activity before reinvestment in non-mining activities can succeed. Meanwhile, a number of projects to add value to minerals have been identified, such as copper smelting and coal washing plants.

Conclusion
In conclusion, Mongolia has stabilised its economy over the short term. Structural reforms and key projects are taking place over the medium term, which should lead to economic growth rates of 8-10% at the end of the decade.

For Mongolia to unlock its mineral potential, the most important issue is for investors to return, and this will depend on the consistency and continuity of policies.

Perhaps most importantly, political stability and consistency in civil service policy need to be restored. Unfortunately, these have not been helped by the previous Prime Minister and his cabinet being forced to resign by a vote in parliament in September. Nonetheless, there are clear signs that the former government made considerable progress on a variety of issues that concern investors, such as the establishment of the Investors’ Protection Council. It is understood that the new Prime Minister, Khurelsukh Ukhnaa, and newly appointed cabinet, are even more pro-FDI than Erdenebat was.  Furthermore, there appears to be broad agreement among the political parties on the importance of foreign investment to Mongolia and the measures required to attract it.  Any future government is likely to adhere to the policies set out by the previous one if Mongolia is going to continue to receive the support of the IMF. Therefore, the economy is likely to continue to improve, a virtuous-circle created and investment influx should follow.