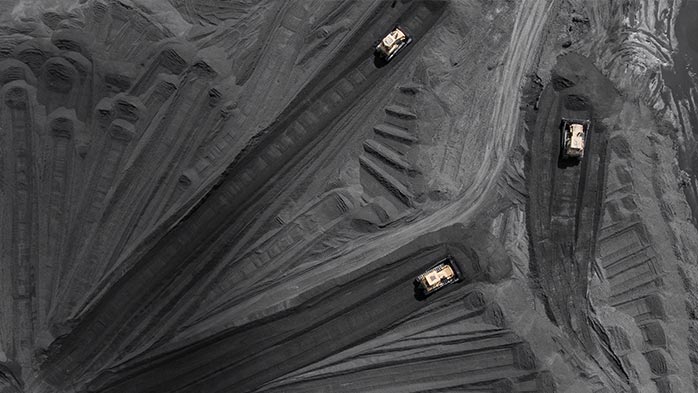 Despite its ambitions for a greener environment, China’s growing demand for power means that coal will remain an important source of fuel for many years to come.


Coal’s share in power is expected to gradually fall as the government’s desire to shift to gas increases. This Insight explores how soaring gas import prices and insufficient infrastructure are limiting the extent to which gas can replace coal in the medium term.

Environmental policies stricter and more expansive
China is having to find the right balance between its traditional mantra of strong economic growth with its more recent quest for a growth that is more environmentally and financially stable. It appears China is willing to sacrifice domestic production and trade for cleaner air.

In early 2016, the National People’s Congress of China ratified its 13th 5-year plan. It included more stringent environmental policies designed to reduce air pollution by promoting the use of natural gas. The largest step taken to meet these targets is the ‘2+26 cities policy’. This policy targets pollution in the winter months (October – March), by monitoring the biggest polluting industries in the 2 provinces and 26 cities most inundated with smog. The strict targets are met by shutting down heavy industry that cannot operate below a certain emission threshold in winter – when the demand for residential heating naturally rises. These policies also encourage industry to use cleaner fuels, as a way of ensuring they can stay open throughout the year.

How China’s quest for blue skies is progressing
China’s power demand has been rising rapidly. During the first five months of 2018, power demand grew by 8.5%, up from 6% in 2017. We attribute this rise to the growing demand for power from the residential sector, which increased by 13% y/y since the start of 2017. We also believe that improving environmental efficiencies has forced industry to become more power intensive to meet specific requirements. As such, we expect total power generation to continue to rise at a similar rate, with coal power generation also increasing from current levels however, its share in the power mix is expected to fall over time. 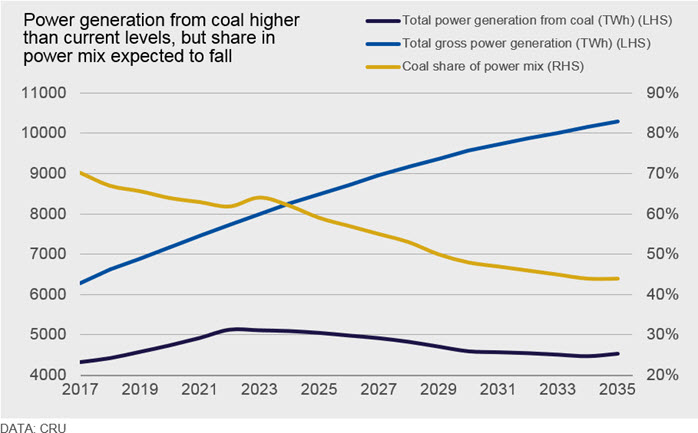 Coal demand
Coal-fired generation accounted for more than 70% of power generation in 2017. CRU forecasts that coal will remain the primary fuel in power generation, but its share will gradually fall to 44% by 2035. EIA’s International Energy Outlook 2017 projected that coal will continue to be an important component of China’s energy mix, peaking at nearly 4,400 billion kWh by 2030. Even though there are positive indications of a switch to cleaner fuels, given the sheer abundance of coal supply in China, CRU estimates that China’s total coal demand for 2018 will reach 3,185 million tonnes, up ~845 million tonnes since 2008. 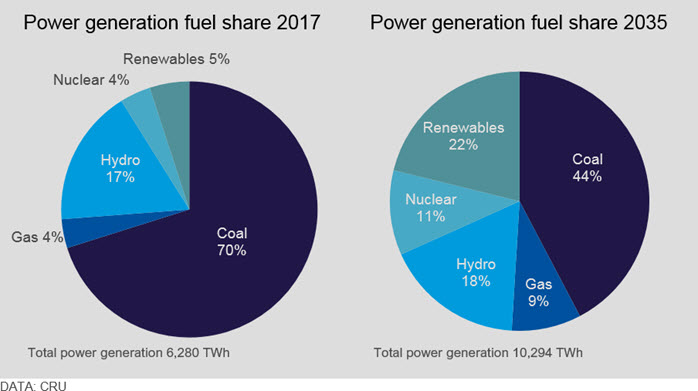 Gas demand
The demand for gas is increasing at a large scale. Earlier this year, China became the second largest importer of LNG, behind Japan, with imports averaging 5 billion cubic feet per day (Bcf/d) in 2017. The EIA forecasts China’s natural gas consumption to grow to 57 Bcf/d in 2040 from 19 Bcf/d in 2015, surpassing all other countries except the United States. As a result of these impressive growth projections, CRU expects gas to more than double its prominence in power generation rising from 4% currently to 9% by 2035.

A large component of gas consumption in China is residential natural gas fired boilers as the country looks to move away from coal heating in the winter. As mentioned previously, the initiative extends to industry. Power intensive industry are forced to shut down during the winter heating seasons. This is done for two reasons: it allows gas to be redirected to heating, as capacity simply doesn’t allow heavy industry to operate alongside home heating; they also simply cannot have high emission industry running in combination with household heating if they are to meet its ambitious environmental policies.

Gas supply
China’s domestic gas supply cannot keep pace with demand because the pipeline infrastructure simply doesn’t exist, and current LNG import prices are too high to act as a substitute. As of 2015, Chinas gas pipelines stretched 64,000km, the heavily industrial northeast has no gas pipeline coverage at all. China also struggles with their ability to store natural gas (key for handling demand surges in winter). Currently their storage capacity is equivalent to 3.3% of demand versus the world average of 11.7%. The pipeline coverage is expected to approximately double to 123,000km by 2025, as the Power of Siberia gas pipeline comes online in December 2019. The large investment that China has put into this pipeline is indicative of their ambitious plans to double the size of their network. Despite these plans we predict gaps will still exist between gas demand and supply, and it is here that coal will remain a backstop.

There is some upside risk to our central view around gas supply. China sits on the world biggest shale gas reserves, but its remote, complex geology makes production costly. While we think a US style shale revolution is unlikely, if more shale gas can be produced at a lower cost, it would go a long way to help the government reach their environmental goals. 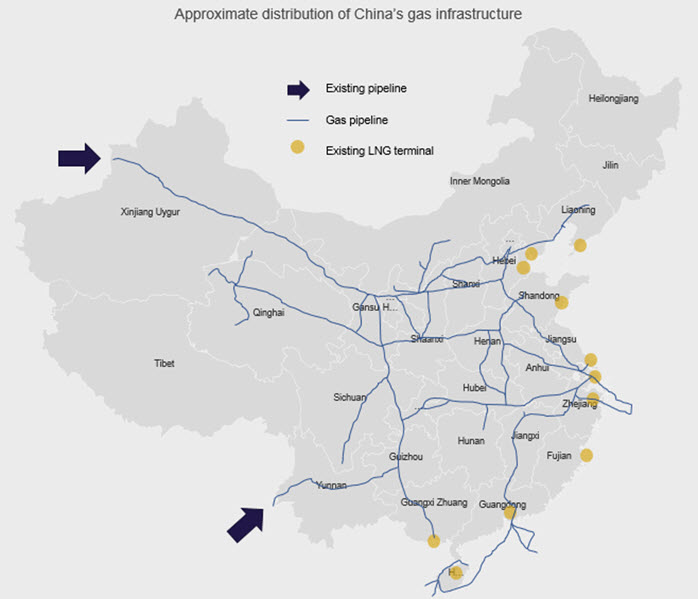 Power demand leads to coal demand, then gas, eventually
High demand for all fuels, including coal and gas, will be a prominent feature in China’s economy for years to come. We believe coal will remain the dominant fuel source for power generation given its sheer abundance, although its relative importance will decline. The demand for gas is growing at an impressive rate, in part due to environmental policies. However, supply constraints will keep a lid on the extent to which the prominence of gas in power generation can grow in coming years.