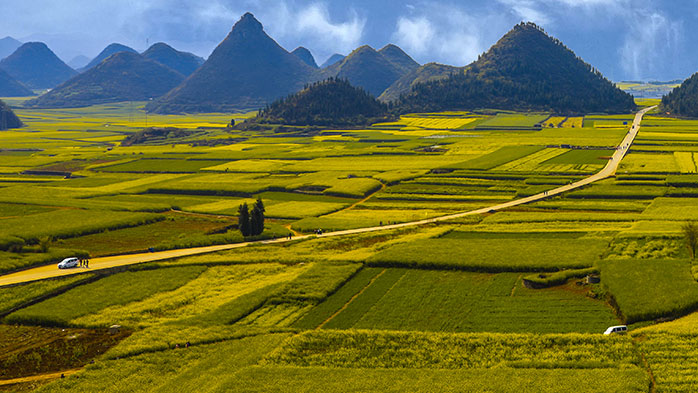 Having expanded rapidly into phosphate and nitrogen fertilizer export markets during the past decade, Chinese fertilizer producers are now responsible for almost 30% of global combined DAP/MAP/TSP shipments.


More recently, the central government’s introduction of tougher environmental policies has brought new challenges of supply disruption and higher production costs. With 29% of the world’s DAP capacity and 36% of the world’s urea capacity, adaption to this new business environment will prove critical to global price developments across most fertilizer markets.

Though President Xi’s speech was a watershed for official policy, the crackdown on fertilizer producers (and heavy polluters) started in June 2016, with a grand tour by central government environmental inspectors around China. The inspections lasted over one and a half years and resulted in the temporary closure of many mines and industrial chemical plants, fines, and most tellingly, the reprimand of local officials. The nitrogen industry has already experienced accelerated capacity closures in 2017 due to these inspections. 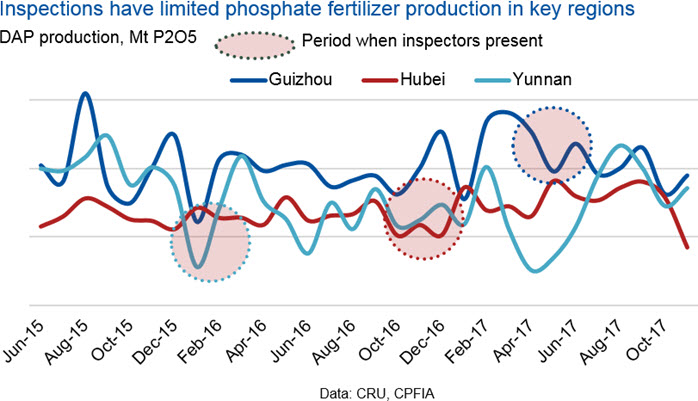 Policy continued to develop over 2017 and the beginning of 2018. A new environmental tax, implemented from the start of 2018, will raise producers’ operational expenditure, albeit modestly. Furthermore, the “Guidance to Enhance Industry Green Developments in The Yangtze River Economic Belt” document focuses on cleaning up the Yangtze river basin. It could result in significant capital expenditure requirements for many small and mid-tier fertilizer producers, with many likely to be forced to relocate by 2020. The question remains, who will pay for these relocation costs, and just how much capital will be required?

Fertilizer producers swept up in reforms

Enforcement of the new Chinese environmental tax
A new environmental tax, introduced in 2018, has replaced the ineffective “pollutant discharge fee”. The fee was regarded as unsuccessful due to weak enforcement and multiple loopholes. The new tax targets solid waste, gaseous emissions, water pollution and noise pollution. Regional governments have retained the power to set the new tax rates, meaning different cost implications across the provinces. CRU estimates that, on average, costs will rise by around 1-3% for both phosphate and nitrogen producers.

The Yangtze River clean up could have dramatic repercussions
One of the key policy documents to emerge from the environmental drive has been “The Guidance to Enhance Industry Green Developments in The Yangtze River Economic Belt”. The document sets out the central government’s target to clean-up the Yangtze river and its surrounding areas, leaving the implementation to regional governments. This will be particularly felt by phosphate fertilizer producers, particularly those in Hubei who rely on the river system for transportation of raw materials and end products. The announcement by the Hubei regional government of a 1km chemical production exclusion zone around the river has caused concern among fertilizer producers. There has been little clarity on whether the individual company or the government will finance the proposed relocation. In CRU’s recently published phosphate fertilizer cost service, we analyse some scenarios around potential costs for these relocations and the impact on the global cost curve.

Environmental regulation drives up key raw material costs
New environmental regulations have also disrupted raw material procurement for nitrogen and phosphate producers. A key reform has been the government initiative to limit coal production and associated emissions, meanwhile encouraging natural gas consumption for residential heating and power. The attempted shift in heating feedstock was ultimately unsuccessful, but still resulted in higher demand for gas and lower supply of coal, driving up prices across both feedstocks. This resulted in volatile ammonia and urea production and a subsequent change in the supply and demand balance in the world’s largest urea market. Furthermore, it has encouraged increased ammonia imports into the country, despite a lack of infrastructure for moving this volatile substance inland to major consumption areas. These issues are covered further in CRU’s nitrogen cost service, along with the quarterly urea and ammonia market outlooks.

In the phosphate industry, mine closures have driven up phosphate rock costs in Sichuan and Hubei provinces. Protection of China’s national symbol, the panda, forced the Sichuan regional government to permanently close mines in certain parts of the province. In Hubei, the regional government re-organised phosphate rock mines below 150kt capacity, some of which have been temporarily closed. Others have been combined to increase adherence to environmental regulations and improve cost efficiency. There has been a subsequent decline in rock production in these two regions as a result, and although there has been no major price reaction yet, it looks increasingly likely there will be some form of market response.

Chinese phosphate fertilizer and urea producers are the marginal exporters for their respective markets and by extension Chinese costs set a global price floor. The impact Chinese costs have on fertilizer markets is best highlighted by developments in the DAP export market from late 2016. DAP China FOB prices fell below the cost of production for many Chinese producers. This resulted in producers announcing production cuts to better manage supply and lift prices to more sustainable levels. Unlike the nitrogen market, where there has been significant closure of capacity, phosphate producers have continued to operate, albeit at reduced rates. However, this disciplined supply approach has resulted in prices being set in better correlation with the price floor, meaning the Chinese cost profile is critical in defining the lower price band for both DAP and MAP, and has also proved to be pivotal for the urea market. 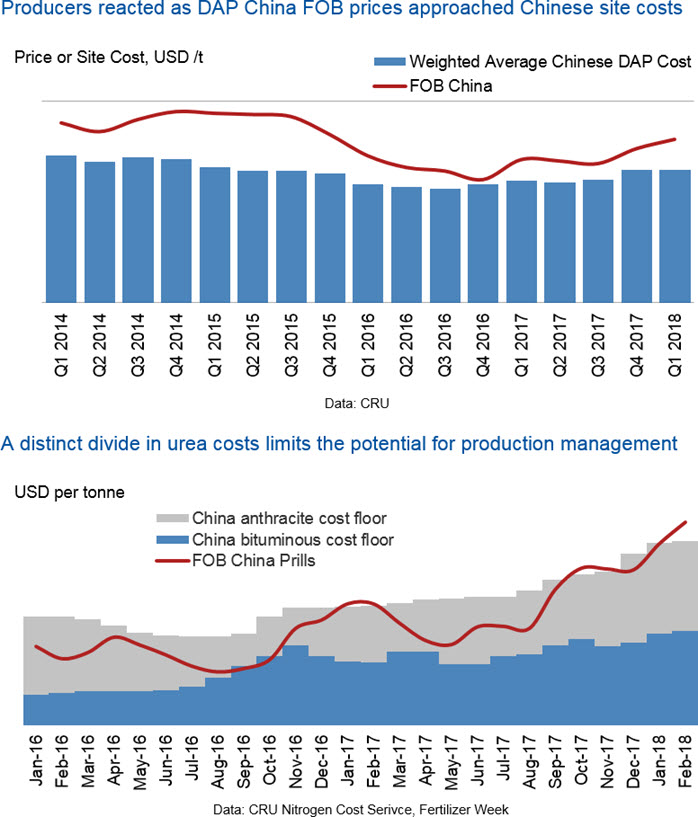 There is undoubtedly more positive sentiment in the phosphate and nitrogen markets due to these reforms in China. The potential for further future supply side reforms, particularly in the phosphate market, mean that further global price support may be viable in the future, despite increased supply elsewhere in the market. CRU’s suite of nitrogen and phosphate cost services, quarterly market outlooks, a committed approach to primary research and experienced analysts based in Beijing provides strong foundations for understanding an opaque and volatile market.