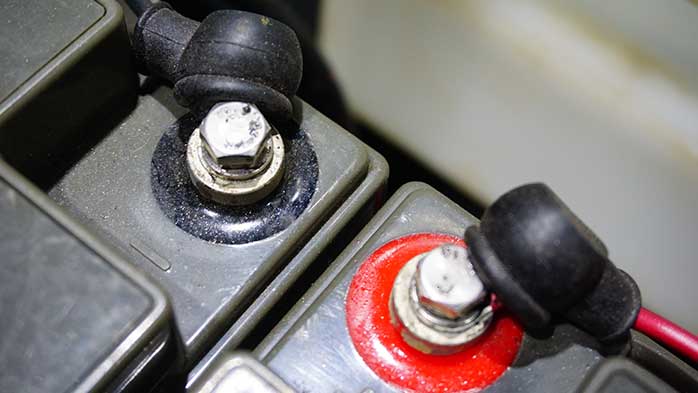 One of the big topics in the metals arena is the path of vehicle electrification around the world as governments look for ways to reduce vehicle emissions as part of a broader aim to lower pollution levels.


Having risen through most of the last century, the world’s vehicle population has continued on an upward path and CRU expects growth to continue until the mid-2030s.  However, the structure of the global vehicle market will undergo major change in the intervening years, with a more diverse range of ‘new energy’ vehicles (NEVs) required. By the mid-2020s, both fuller HEVs (Hybrid Electric Vehicles) and full BEVs (Battery-power Electric Vehicles) could begin to take a notably larger global OEM vehicle market share away from more conventional ICE (Internal Combustion Engine) vehicles. 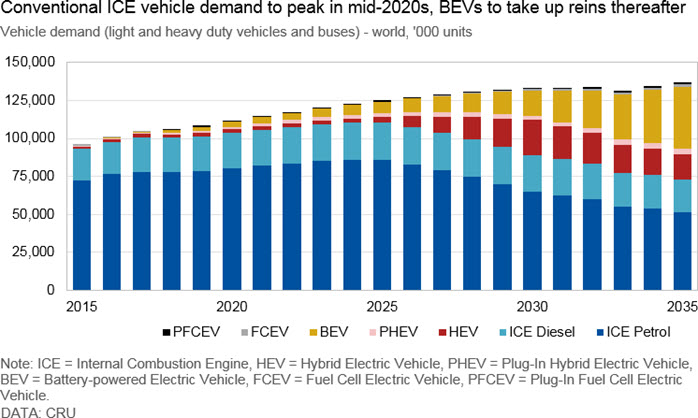 Almost all of the analytical and media focus is on the rise of lithium-ion batteries (LIBs) to provide the greater power needs for these NEVs. Of course this will require higher supplies of the raw materials used to make LIBs, resulting in bullish demand and price outlooks for lithium, cobalt and nickel. CRU’s new service, Battery Metals Market Outlook (BMMO), provides much more detailed analysis on the above points.

However, this automotive battery story almost invariably tends to overlook the ‘elephant in the room’, namely lead-acid batteries (LABs). LMC Automotive estimated that global ‘non-ICE’ light vehicle production totalled just over 4M last year, representing another big year-on-year jump. However, this still only accounted for 4% of all light vehicles produced worldwide, leaving the ICE segment of just over 100M to account for the remaining 96%. This vast majority of ICE vehicles all use a LAB as the only source of power to meet the vehicle needs. Moreover, within this ICE segment there is the growing share of micro ‘stop-start’ HEVs that also use LABs to allow the engine to be idled and restarted when the vehicle is at a standstill (e.g. at traffic lights or in congested traffic). LMC Automotive estimates around one third of all new light vehicles worldwide being made today already include a ‘stop-start’ function and expects this share to approach 50% in the early 2020s. Even in many of the ‘non-ICE’ NEVs, we understand that they still have a smaller auxiliary LAB to perform safety and security functions as well as SLI (starting, lighting, ignition) functions in fuller HEVs.

Even if LAB usage to make new (OE) vehicles does reach a peak in the next decade, the need to replace failed LABs (replacement) in the existing still ICE-dominated vehicles on the road will continue for many years thereafter. A modern and well-maintained ICE vehicle can now last well over 10 years. With the global light vehicle population breaking the one billion barrier at the start of this decade and now approaching the 1.4 billion mark, the maintenance of this enormous and ever growing ‘on the road’ fleet accounts for the lion’s share of LAB demand, with failed LABs providing feed for lead smelters to recycle in a well-established ‘closed loop’ lead cycle.

LAB use in vehicles is only one (albeit the biggest) thread to their applications in the wider energy sector. LABs continue to be the dominant battery chemistry across a wide range of industrial (non-automotive) sectors. These more varied applications fall into two broad categories – motive power and reserve power. Motive power LABs are typically large heavy-duty units used as the power source for a number of vehicular applications requiring fast charge in a cyclic duty where reliability and lack of emissions is vital. These are mainly forklift trucks, but also include automatic guided vehicles, airport ground support equipment and mining vehicles. Industrial back-up power LABs are used in a wide range of applications where a standby source of electricity must be constantly and instantly available, for example in telecommunication transmission masts, computer networks and data storage.

As on the automotive side, LIBs are also a growing threat to the dominance of LABs in many industrial uses. However, there is also some optimism that relatively cheaper LABs can still take a share of the emerging back-up power ‘load-levelling’ needs. This revolves around the growing, but variable power generation from renewables (wind, solar, hydro) that must be stored (in batteries) so that they can be released as and when needed by local/national power grids around the world. If LABs only take even a small slice of this emerging huge market, it could offset any future decline on the automotive side. And even on the automotive side, if LABs are increasingly not to be used to power the actual vehicle in future decades, then maybe there is an opportunity for LABs to store the reserve power to charge fuller HEVs and BEVs?

Respected energy and battery sector analyst Avicenne acknowledges that LIBs are growing rapidly, but also estimated that LABs still accounted for around 75% of the global battery market last year in all applications (automotive and industrial) and that LABs will retain the lion’s share for many years to come.

Outside the energy storage and battery arena, we should also not forget that lead is still used in other applications. These include lead usage in glass, stabilisers, rolled and extruded products, ammunition, radiation shielding and underwater cable sheathing. After previous years of environmental and human health-driven substitution, remaining ‘non-battery’ uses now represent a resilient remnant.

In conclusion, there is no longer any doubt that LAB usage in many applications will continue to come under threat from growing LIB usage, given the latter’s superior energy and power density performance.  However, CRU believes that there is still plenty of room for LAB demand to continue growing into the early 2020s (and probably for most of the next decade at least).  One other point that may yet swing the pendulum more slowly away from LABs towards LIBs are ‘cradle-to-grave’ issues.  These revolve around broadening the comparison between the two competing battery chemistries, mainly relating to safety, recyclability and cost, not to mention issues surrounding reputable environmental stewardship and sustainability.