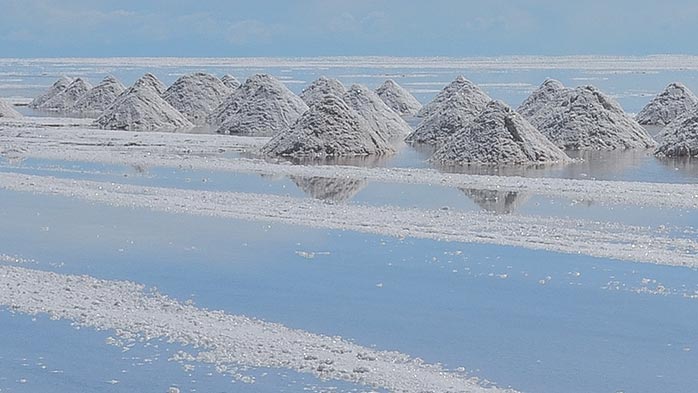 Due to their large reserves and low cost structure, Chilean lithium brine operations have long been the mainstay of global lithium supply. But the emergence of Australia as a powerhouse in hard rock mining has prompted evolution of the supply chain.


Major lithium producers which have previously been strongly involved in South American brine operations are now investing in Australian spodumene projects to strengthen their foothold in a burgeoning downstream market.

Brines are the long-established source of lithium…
Brine operations have historically dominated global lithium supply, particularly in South America where over 60% of global reserves are hosted. These deposits have been producing for a long time and typically have lower operating costs than hard rock mines.

…but brine players are now investing in spodumene mines
Strong lithium prices and large market deficits of recent years have prompted significant investment in hard rock lithium mining by brine producers. This has been particularly prevalent in Australia, where all of the country’s output comes from spodumene-bearing pegmatite deposits and is ideally located to supply China’s refinery sector.

One such example is Albemarle. Traditionally a brine operator of the Silver Peak and La Negra brine operations in the USA and Chile respectively, the company has entered into an agreement with Australian hard rock lithium miner Mineral Resources for the creation of a 50/50 joint venture to operate the Wodgina spodumene mine in Pilbara. The plant will be commissioned in three 250,000 t/y stages with the first two modules scheduled to be in operation in Q2 2019 and the third stage in Q3 2019. The firm also holds a 49% stake in Talison Lithium which runs the Greenbushes operation, Australia’s incumbent spodumene mine.

This deal comes after Chilean brine producer SQM in 2017 purchased a 50% stake in the Earl Grey spodumene operation in Mt Holland, Western Australia. The project is being developed with Kidman Resources. 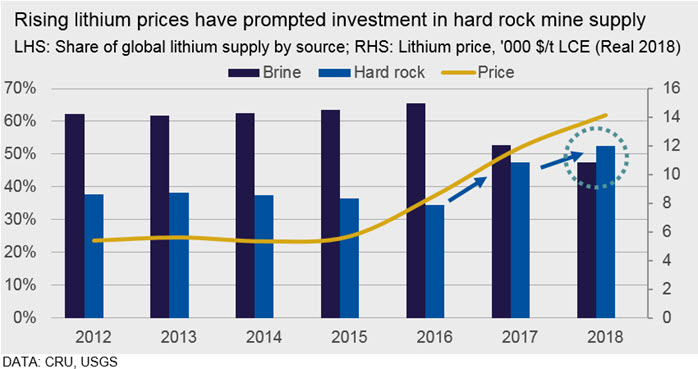 So why is hard rock the target of investment?
Brine giants like SQM and Albemarle have no shortage of large, low-cost brine reserves in South America. Intuitively one would expect these companies to choose to develop their own reserves before embarking on JVs in higher-cost hard rock mining projects in Australia. However, there are several key reasons why hard rock mining has become a more attractive investment in recent years.

1) Hard rock is more suitable for making lithium hydroxide
Battery-grade lithium generally comes in two forms: lithium carbonate and lithium hydroxide. Lithium carbonate has traditionally been the mainstay of the lithium-ion battery market, being used for zero- and low-nickel battery chemistries like LFP, LMO, NMC 111 and NMC 532. However, high-nickel battery chemistries like NMC 622 NMC 811 and NCA require lithium in the form of hydroxide as it allows the sintering process to occur at higher temperatures. These battery chemistries have a higher energy density, and are generally favoured for the manufacture of electric vehicles. For this reason, hydroxide demand growth will significantly outstrip carbonate demand growth in the coming years. 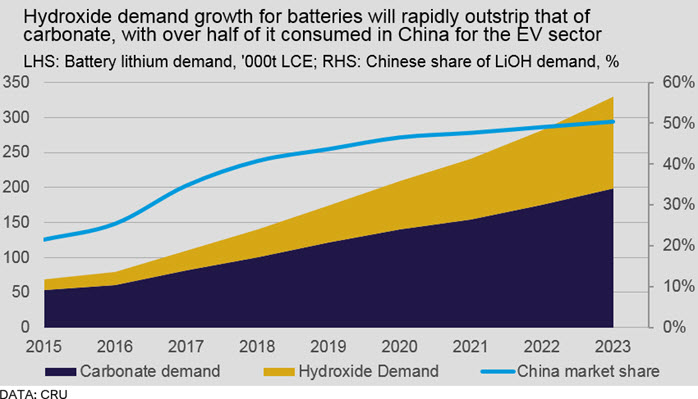 It is possible to produce hydroxide from brine sources – SQM has hydroxide conversion capacity in Chile, and Orocobre and Toyota Tsusho plan to build a battery-grade hydroxide plant in Japan which will use carbonate produced from Olaroz in Argentina. But battery-grade lithium compounds are more typically produced using hard rock concentrate as feedstock because of lower impurity levels and a more standardised production process. For this reason, SQM and Albemarle’s Australian plans also involve integrated spodumene conversion facilities which will turn the produced material into battery-grade lithium hydroxide suited to the Asian market. 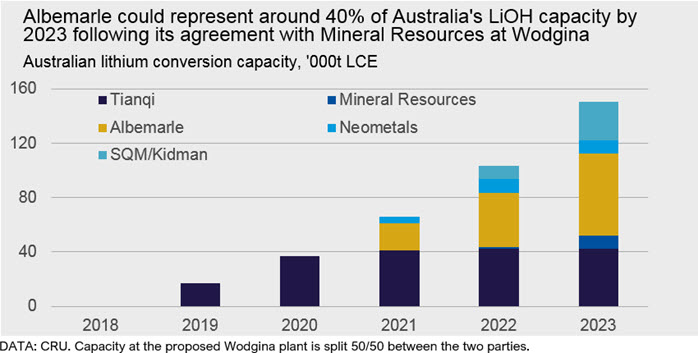 2) Increased environmental concerns over brine mining
The intensity of water usage in brine mining in the Atacama Desert has become a contentious issue in recent years. This has resulted in regulators clamping down on mining operations and expansions in order to prevent water shortages. This week, Chile’s environmental regulator on Monday approved a $25 million compliance plan by SQM, ending a multi-year investigation by authorities that found the Chilean miner had overdrawn lithium-rich brine from the Atacama salt flat. The company has also agreed to shut down one of its freshwater wells in an area where authorities said native algarrobo trees and desert vegetation were dying from lack of water.

Albemarle has faced similar issues from regulators. The company was forced to halt engineering work on the final stage of its La Negra expansion after Chilean environmental regulators rejected the proposal because of uncertainty and concerns over water usage.

Although water consumption remains an important consideration in hard rock mining, it is much less of an issue relative to brine extraction. This factor may well have contributed to brine producers diversifying their development strategies through investing in spodumene projects.

3) Higher lithium prices reduce brine’s cost advantage
Brine projects are inherently cheaper to operate than hard rock. For this reason, the lithium cost curve has traditionally been highly diverged, with lower-cost South American brines at the bottom half of the cost curve and hard rock operations making up the entire higher-cost half of the curve. However, one of the key sources of operating cost for Chilean brines has traditionally been royalty payments to the government. These payments increase linearly with the lithium price, meaning that as the lithium price has increased in recent years, so has the cost structure for lithium brines. Hard rock mining operations do not typically operate in jurisdictions with large royalty payments, meaning that their operating costs are less sensitive to lithium prices.

Global lithium prices skyrocketed to over $15/kg in 2018, and Chilean royalty payments subsequently increased, pushing the cost of domestic brine operations much closer to hard rock mines in 2018. Although the lithium cost curve still broadly maintains this two-tier structure, brines do not command as significant a cost advantage as they once did.

Despite the flattening in 2018, CRU’s cost analysis still places South American brines at the low end of the cost curve by 2023. We expect Chilean operations’ costs to be lower relative to 2018 because of lithium carbonate prices falling from recent peaks and the corresponding decrease in royalty payments. But there are some factors which could continue to flatten the cost curve in the coming years – if lithium hydroxide continues to maintain its premium over carbonate, this would convey a cost advantage to the new wave of integrated hard rock producers in Australia. 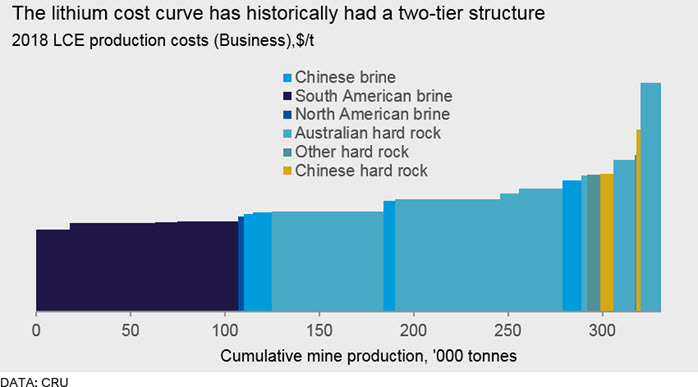 Hard rock mining will consolidate status as main source
Despite its higher cost structure, hard rock mining holds several compelling advantages over brine supply. For this reason, CRU believes that lithium hard rock supply exceeded that of brines for the first time in 2018, largely due to a rise in Australia’s hard rock lithium output. Australia’s mine production more than doubled in 2017 as the country displaced Chile as the world’s largest producer.

Looking ahead, we expect hard rock mining to maintain its position as the main source of lithium out to 2023. Australia will remain the world’s largest producer through a combination of operation ramp ups, new projects coming online and expansion plans.