Carbon capture and storage in China 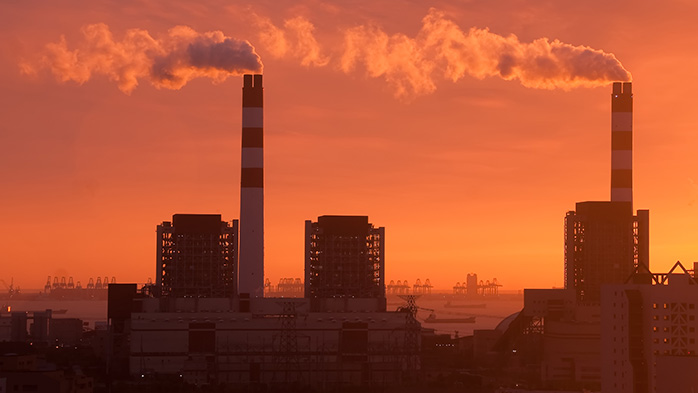 
However, currently, carbon capture technology is only economically viable in cases where the CO2 can be sold and used by other industries, that is, referred to as carbon capture and use or CCU, but this limits the volumes that can be viably captured currently. In order for CCS (i.e. the storage option) to be more generally economically viable, we estimate that costs need to fall by ~50% from recent levels. This indicates that carbon capture capacity will be limited in the near term, as will its shielding effect on coal consumption.

On the one hand, China cut its primary energy intensity of GDP by 40% from 2005 to 2017 through energy efficiency policies and its stronger growth in services. On the other hand, coal’s share of power generation reduced from 80% to 63% over the same period. Nonetheless, continued efforts to reduce carbon emissions, especially in the power generation sector, are required in order for the 2030 and 2050 targets to be achieved.

As illustrated in the graph below, to meet the target of limiting global temperature rises to 2ºC, as stipulated under the Paris Agreement, a conservative estimate for Chinese responsibility suggests that the carbon intensity of GDP needs to fall by 4–7%/y by 2030 and then by a further 3–12%/y between 2030 and 2050. This indicates that, up to 2050, Chinese carbon intensity needs to continue falling by at least the same pace compared with the past 15 years. Moreover, stricter constraints are likely to be imposed to meet the more onerous 1.5ºC target, as suggested by the 2018 IPCC special report. This suggests that harder efforts to control carbon emissions will be needed, which will likely require the development of new technologies. 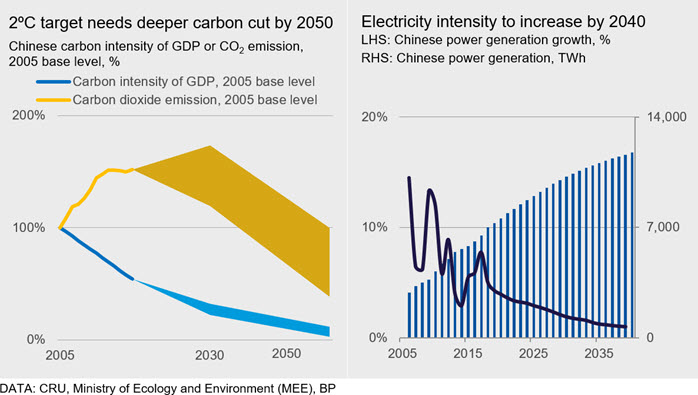 The power sector accounts for ~40% of Chinese carbon emissions and is, therefore, a key focus for reducing emissions. Furthermore, electricity is expected to continue to account for a higher share of total primary energy consumption, as dispersed, direct burning of fossil fuels is being discouraged in order to improve air quality.

As a result, we expect electricity generation to grow at a strong pace of 3%/y up to 2030. Therefore, CO2 emission control in the power industry is increasingly important in China’s fight to meet its carbon emission targets.

Uncertain profitability deters deployment of CCS
While the rapid expansion of renewable energy has contributed to emission reduction by reducing the growth in coal consumption, and will continue to do so, carbon capture at coal-fired power plants (CFPP) also has the potential to mitigate carbon emissions. Of course, from the perspective of the coal industry, this is more promising because it allows for coal use to continue.
China is at an early stage of CCUS (i.e. carbon capture use and/or storage) deployment. Seven CCUS projects in the power industry are either running or will start operating by next year, with CO2 capture ranging from 10,000–150,000 t CO2/y, suggesting that most of the projects are only capturing <5% of the total CO2 emission.

Doubts about the profitability of CCUS projects or a carbon capture retrofits are a major hindrance to the larger-scale development of the technology. While renewables have typically received tariff prices high enough to encourage development, this does not happen for CCUS investments. Therefore, due to high operating costs, the technology has only been viable in cases where the CO2 can be sold to other industries or for enhanced oil recovery (EOR).

CCS operational costs far exceed power selling profits
At a typical, Chinese coal-fired power plant, fuel accounts for ~60% of total costs, assuming an average coal purchasing price of RMB570 /t for 5,500 kcal/kg coal, and, at recent power prices of RMB0.37 /kWh, profit margins are estimated to be 10–15%. However, our analysis shows that the use of CCUS can more than double overall costs, with increased fuel costs associated with lower efficiencies and increased non-fuel operating costs, which more than wipes out this profit margin.

The most commonly adopted post-combustion, carbon capture method currently requires ~28% more coal per kWh of electricity produced. This is mostly to provide the power to operate the CCUS equipment and to compensate for the efficiency loss due to flue gas extraction. We estimate that capture and other operational and maintenance costs are ~$40 /tCO2 and transportation and storage costs are ~$30 /tCO2. This leads to a 130% increase of total power generation cost at an ordinary CFPP.

Chinese coal plants typically operate at low load factors, which increases costs, but even if priority is given to coal plants with CCUS installed, to allow operation at higher load factors, our analysis shows this will not be able to offset the higher costs. As such, CCUS is unlikely to be widely deployed without some further compensation. 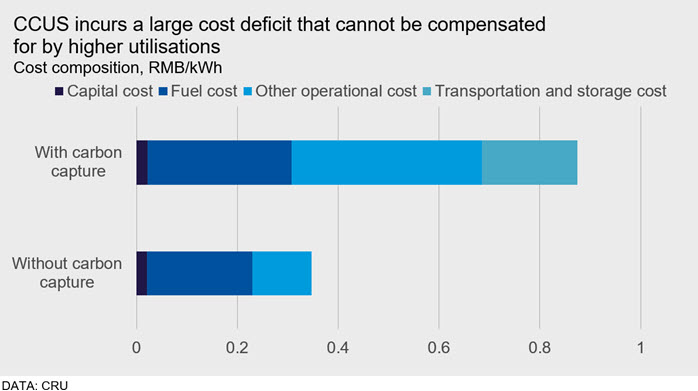 In summary, we estimate that an average CFPP with CCS installed, without any revenue stream for the carbon, would face a loss of RMB0.5 /kWh. This number is much higher than current subsidies for most, newly installed wind and solar capacity and also higher than the desulphurisation and denitration subsidy for retro-fitted coal-fired power plants. Therefore, especially when Chinese coal-fired power sector has already been criticised for receiving too much subsidies explicitly or implicitly, it is less likely that the power industry can be entitled to special feed-in tariffs that are high enough to fully recover the deficit of deploying CCS.

Carbon sales are required, unless CCS costs are halved
In the short and medium term, sales revenue from CO2 use in the food industry and for EOR projects can make small-scale pilot CCUS projects viable. The prices of received of ~RMB500 /tCO2 for industrial-grade carbon dioxide and ~RMB800 /tCO2 for food-grade CO2 can generate RMB0.5–0.8 /kWh of revenue that could render a CCS project viable. However, current demand for CO2 is far too small to underpin large-scale development. Chinese demand for CO2 for industrial use is <10 Mt/y, which is <0.1% of Chinese emissions.

Standalone storage capacity is currently estimated to be <300 Mt/y, but EOR and enhanced coal-bed methane recovery (ECBM) could potentially use tens of billions of tonnes of CO2. Thus, unless saline aquifers or some other large-scale CO2 storage approach is used, <4% of Chinese CO2 emissions can be absorbed. This also ignores the fact that CO2 use in other sectors still results in CO2 being released into the atmosphere.

Alternatively, power plants capturing CO2 can also be compensated by trading their emissions allowance in the regional or national carbon market. A carbon price of RMB200–300 /t CO2 ― a price that industry experts believe is possible in the long term ― would earn RMB0.14–0.21 /kWh. If, in addition, carbon capture and transportation costs can be cut by half, it would then be feasible for the coal plant retrofit to break-even in the long term.

While operating CCUS projects are currently quite costly, multiple demonstration projects are still expected to be developed. Based on the analysis of CCUS costs, carbon use potential and storage capacity, the Chinese 2019 CCUS roadmap assumes a carbon capture capacity of ~100 Mt/y and <300 Mt/y by 2035 and 2040 respectively. This indicates that, by 2040, ~150 Mt annual coal consumption, or just ~4% of current annual thermal coal consumption, would have the potential to be ‘carbon neutral’ by this time.

Today, CCS is also costly for the Chinese steel industry
The steel industry contributes ~15% to Chinese CO2 emissions and ~17% to coal consumption, therefore, CCS could provide a route to reduce the carbon footprint of the widely adopted BF-BOF steelmaking route. Thus, based on current CCS technology development and costs, if the CO2 contained in blast furnace gas is captured using the post-combustion method and then stored underground, our analysis shows that CO2 emissions from a steel plant could be reduced by ~33%, but at a cost of ~$40 /t steel. This would put the cost of CO2 captured at ~$70 /t CO2). Given typical levels of profitability, this would certainly undermine steel plant viability.

Having said that, if the steel industry becomes more widely involved in the Chinese carbon market, combined with a halving of CCS costs, then the deployment of CCS at a steel plant could become more viable in the longer term if a CO2 price of $40–50 /tCO2 is feasible. However, this would require that storage options are available.

CCUS currently unlikely to help reduce Chinese CO2 emissions
The current state of CCUS technology development means that it is unlikely to make a significant contribution to lowering Chinese CO2 emissions. Indeed, the Chinese CCUS roadmap itself limits its potential to <300 Mt CO2 /y captured by 2040, thus impacting <4% of current coal demand. The costs of CCUS are currently prohibitive and there are few, if any, subsidies to encourage its deployment.

Although most work to date has focused on the use of CCUS in the power sector, our analysis shows that the application of CCUS to the steel sector also looks tenuous, given the uplift in steelmaking costs associated with operating the equipment. Our analysis shows that CCS costs would need to at least halve before it provides a viable option for reducing CO2 emissions.