In recent weeks, Australian coal cargoes have been facing increasing delays clearing customs at Chinese ports. Most recently, it was reported that Dalian Port, in North China, has banned Australian coal from being received. This Insight aims to explain the possible impact of such policies, which are making Australian coal less viable for Chinese consumers.


A weaker Chinese market makes this more feasible
Chinese coal imports have increased by a CAGR of 11% since 2015, considerably stronger than underlying demand growth of 1% per year. During this period there has been major consolidation of the country’s coal mining industry that resulted in a 9% drop in coal production in 2016 and limited supply growth in 2017. This consolidation is viewed as successful, as profitability of the coal industry has improved; however, higher imports are an undesirable, albeit very predictable, outcome from supply-side reform and now market conditions are such that policy makers feel able to do something about rising imports.

While we estimate the Chinese coal industry remains profitable, margins are falling and are at their lowest since restructuring began. Coal demand, particularly in coastal China, fell significantly towards the end of 2018 as Chinese industrial activity deteriorated. At the same time, Chinese coal supply has gradually improved in recent quarters as the pace of capacity closures has slowed and incremental capacity has been expedited in order to bring down fuel costs. Coal production has risen by 5% y/y in recent months, while demand growth has slowed and most Chinese consumers have plenty of stock to use. 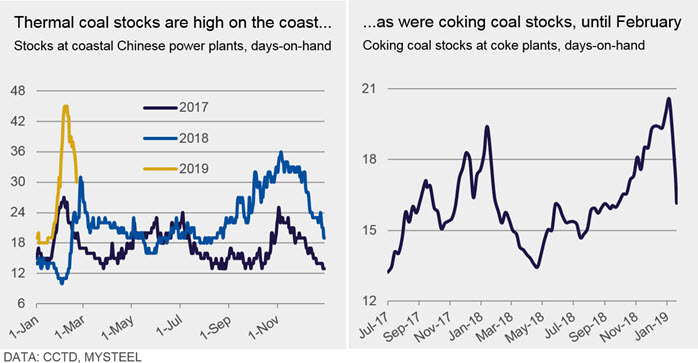 Both parties will be affected
Despite the fairly weak market in China, domestic thermal and coking coal prices have risen in response to this development, albeit slightly. In the last three years, Australian coal has accounted for 30% of total Chinese coal imports but we estimate that Australian met. coal accounts for 80% of met. coal imports on the coast (i.e. excluding inland imports from Mongolia). Australian thermal coal accounts for 20% of Chinese thermal coal imports, but the relatively high energy content of these tonnes means that Australian coal has accounted for 30% of energy imported in coal. 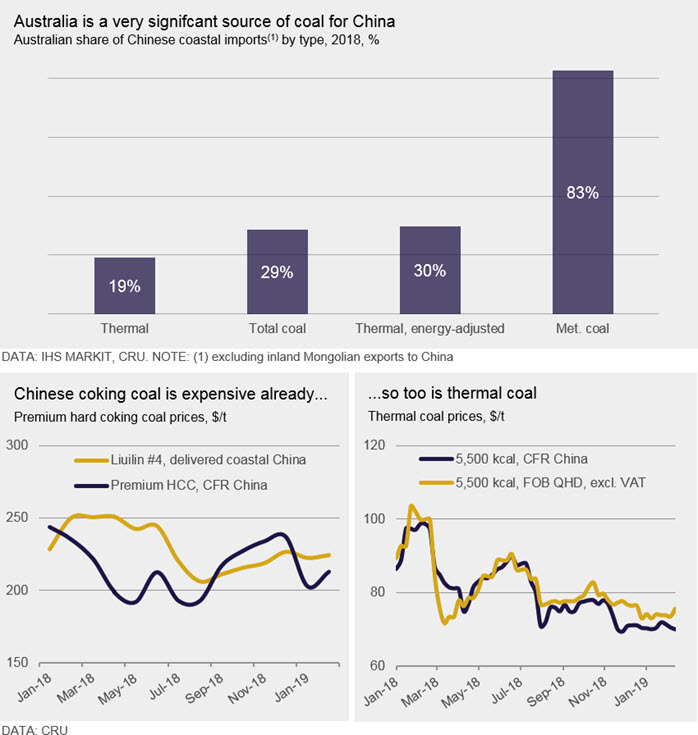 One result of this policy is that Chinese coal price will diverge from other markets as coal will become more expensive for Chinese consumers compared with consumers in other, competing countries. Australian producers will, to some degree, be forced to compete for sales in alternative countries and this will lead to relatively weak prices in the seaborne market.

In recent months, this price dynamic has already been observed as exporters have faced difficulty selling to China. Recent policy escalation will exaggerate this divergence, particularly for coking coal.

CRU estimates that steelmaking profitability in China has already fallen from >20% (EBITDA) during most of 2018 to just 6% currently, which is typically not enough to cover debt obligations. Moreover, it is considerably lower than steelmakers in other countries, such as the USA. It should be highlighted that there is currently no discernible distinction being made between coking and thermal coal, although Dalian Port, given its location, mostly imports coking coal from Australia, rather than thermal coal.

The impact on the thermal coal market in China is likely to be less severe to any particular and more gradual. Moreover, our conversations suggest that Chinese thermal coal supply is likely to continue to expand in the coming months, which could offset any reduction in availability from overseas. Nonetheless, higher power prices—even if they are only marginally higher than they otherwise would be—are inflationary and not desirable.

Officials in China and Australia have been quick to play-down these issues. There are obviously broader ramifications that serious and long-lasting restrictions would have and this development is being linked to other recent disputes between the two countries.

Shunning Australian coal will have negative consequences for industries in China, particularly for steelmakers. Exporters from Australia and elsewhere will also be hurt by any serious restrictions. We expect 6,000 kcal/kg and 5,500 kcal/kg thermal coal prices to be negatively impacted in the short-term as Australian supply—which is too profitable to be scaled back at current or expected prices—competes for sales in other Asian countries. There are other factors to consider for coking coal, as supply disruptions continue to occur in Queensland.