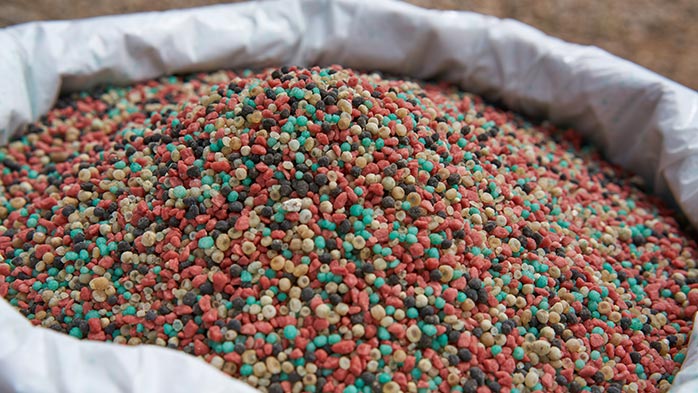 The global fertilizer industry is in a turbulent state. All three nutrients, nitrogen, phosphate and potash have witnessed major capacity expansions since the commodities boom in 2008.


This has translated to lower prices, particularly over the last four years. China has been the epicentre of much of this investment, but many facilities incur high – and rising – operating costs. The country is now the marginal producer in the phosphate and nitrogen markets, while growing domestic potassium production has disrupted trade flows. Higher production costs in China will have a profound influence on global fertilizer trade and pricing in the future. This, combined with tightening environmental reform and more scrutiny on unprofitable state-owned enterprises, could lead to yet another structural shift in the global fertilizer industry. 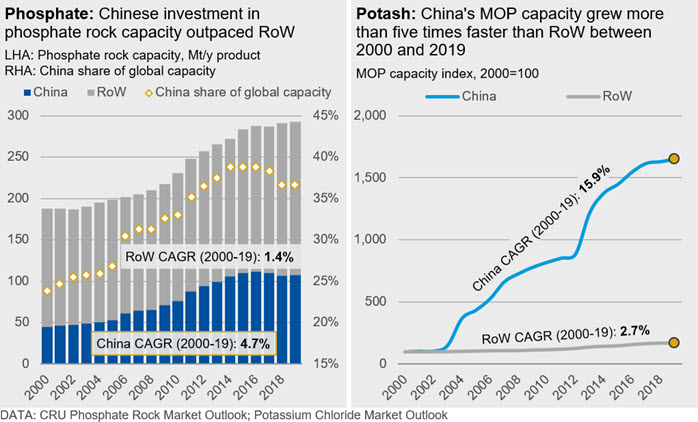 China’s ‘noughties’ transformation…
In the early 2000s, China heavily invested in domestic fertilizer production capacity, spurred by cheap and state-backed capital. Little more than a decade later the country had transformed itself into the world’s largest phosphate fertilizer producer and had also become a major potash producer. By 2019, China’s phosphate fertilizer capacity had quadrupled in size compared to 2000; potassium chloride (MOP) capacity grew by more than 16 times, and phosphate rock capacity doubled over the same period.

Unlike the nitrogen and phosphate sectors, China remains reliant on overseas imports to fulfil its annual MOP requirements. However, the rapid growth in domestic production capacity meant that Chinese MOP evolved from supplying around 15% of the country’s total MOP demand in 2003, to around half by 2015. 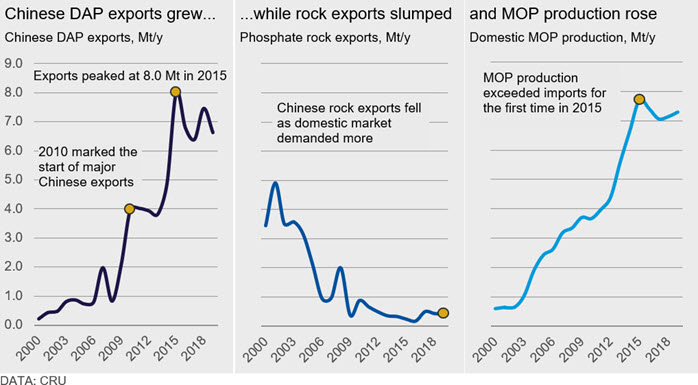 …but suffers from an early mid-life crisis
The rapid growth in Chinese domestic fertilizer capacity was supported by both regional governments and the central government through cheap capital provision and favourable policy. However, many domestic production facilities have since moved up the global cost curve as labour costs rise and environmental compliance tightens. A large portion of both DAP and MOP producers are now in the third or fourth quartile of the respective industry cost curves. Phosphate rock costs are spread throughout the site cost curve and many sites appear competitive when not accounting for quality. But low in-situ grades and basic beneficiation technologies mean that the quality of rock produced across China is low, often with high levels of impurities that impede phosphoric acid (WPA) production.

The high production costs mean that in both potash and phosphates China should support market prices and act as a marginal producer. This is particularly important in the phosphates industry as Chinese producers are also the marginal exporters. Phosphate rock is the major raw material phosphoric acid production, so cost inflation in the mining industry heavily impacts phosphate fertilizer production costs. This in turn can profoundly influence global fertilizer prices.

Government regulations force an industry ‘detox’
Most recently, attention has centred on sweeping environmental legislation across the country. This has particularly impacted phosphate producers with many having to extensively modify process routes or prepare to move entire facilities away from areas deemed environmentally sensitive. The phosphate rock industry faced substantial disruption due to environmental policy with the closure of the entire mining area of Qingping in Sichuan, China due to mines encroaching on the Panda’s natural habitat.

Over the medium and longer term though, major cost inflation looks set to act as the single biggest pressure on Chinese fertilizer producers. CRU estimates that by 2023, global production costs in the MOP and DAP industries will have inflated by 12% and 26% respectively, compared to 2016 levels. However, we project that cost inflation amongst Chinese producers will be much higher.

This largely relates to our view of how Chinese labour costs will evolve over the next five years. Though Chinese labour productivity is increasing, driving up real wage growth, the country’s labour market has also tightened, partly as a delayed result of the “one child policy” and slowing migration to cities. The growth of China’s services industries and its expanding middle-class population compound the tighter industrial sector labour market.

Chinese producers did nevertheless benefit from a reprieve in 2019. The depreciating RMB against the US dollar supported margins in dollar-denominated products. CRU does not forecast this strengthened cost position to continue unless the Chinese economy is to slow substantially. But this may be one ‘lever’ pulled by policy makers to ensure China remains competitive on the global commodity stage, particularly as trade balances come under the spotlight.

Will China to continue to be a disruptive force?
Given how rapidly costs are projected to rise in the Chinese fertilizer industry, this could produce a range of reactions from the domestic phosphates and potash industries including further M&A activity, switching or diversification of products, and idling or even permanent closure amongst higher cost operations. Ultimately, China’s extensive investment in domestic fertilizer capacity has stalled. The rising cost pressures could see the industry consolidate and, over the long term, diminish in size. But China has proven in 2019 it can continue to be a disruptive force to the industry, with many phosphate exporters continuing to supply volumes well below the cost of production.

The development of the Chinese industry over the medium term will define the health of the fertilizer market globally. A clear understanding of potential scenarios around cost inflation, environmental policy and domestic fertilizer demand will be critical to making informed strategic decisions. CRU first opened its Beijing office in 2004, allowing our team to gain a clear picture via our experienced China-based analysts. CRU recently made further investments into China by opening our Shanghai office in 2018.

CRU’s fertilizer cost services leverage critical information supplied by our China-based team. Additionally, they use data acquired by extensive primary research from regular site visits conducted by our analysts to Chinese production facilities. This gives CRU a unique understanding of the opaque Chinese market and provides clarity on risks and opportunities in the global fertilizer market to our clients.