Chinese coke capacity to fall in the coming decade 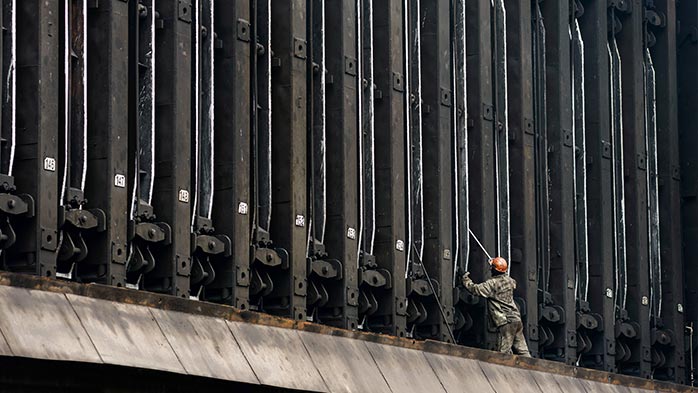 The Chinese steel value chain suffered great losses in late-2015 due to structural over-capacity. The government has since conducted a ‘supply-side’ reform by eliminating outdated and inefficient industrial capacity, including coke ovens.


Since China has entered a development stage with slowing steel demand growth and with increasing scrap supply reducing the need for hot metal, the coke sector will continue to be subject to capacity consolidation and rationalisation for environmental protection purposes. In addition to capacity reductions, the coke industry will also be ‘greener’ in the coming decade through the replacement of inefficient, small coke ovens by larger and cleaner ovens.

The government will keep cracking down on pollution
The 13th National People’s Congress (NPC) began its annual two-week meeting on 05 March. During what was arguably most important policy meeting, the Chinese government said it would maintain the good results achieved in environmental protection over the last two years. This means that polluting industries, including coke operations, will be discouraged in coming years.

CRU has identified that coke making is, in theory, the second largest emission source at an integrated steel mill. The 0.27 kg/tonne of crude steel of PM emission is only second to that of the steelshop and accounts for ~28% of total PM emissions from the integrated steel mill. Given this, coke oven operations have been more closely watched and restricted by the government in 2018. In fact, hot metal capacity restrictions have been relaxed for most of the 2018/2019 WHS, but restrictions on coke operations have been stricter, largely in response to high pollution levels. Although air quality improvements were not as significant as those in the 2017/2018 WHS, when overall capacity restrictions were more aggressive, it still improved significantly compared with badly polluted years prior to 2017. Controlling coke capacity is much easier and less costly than restricting BF operations and can achieve results acceptable to the government. 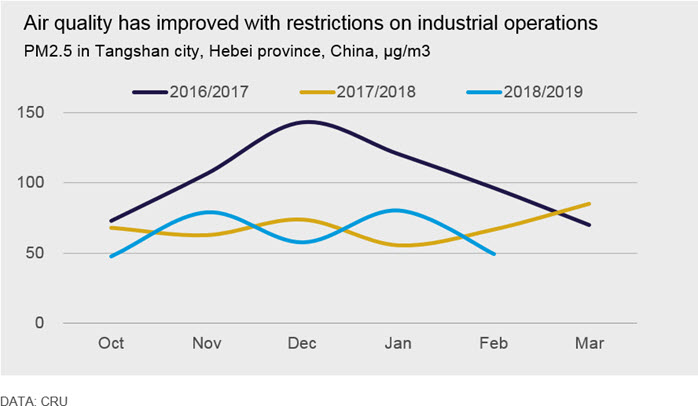 Coke capacity to peak with lower ironmaking capacity
In addition to short-term measures to improve air quality, including lengthening coking time, the government has also been seeking ways to structurally rationalise the coke industry. Taking account of some new capacity coming from replacement projects, Chinese coke capacity has fallen by a net of ~17 Mt/y over the last three years. Instead of coming to an end, the government is likely to further limit the more polluting coke operations in the coming years. According to the government document for the 2018/2019 WHS, coke capacity in Hebei, Shandong and Henan province should be less than 40% of corresponding ironmaking capacity in those provinces by end-2020. Since CRU forecasts a steady decline in coke rates in hot metal production in future due to factors such as larger BFs and increased coal injection, we believe that this is a ‘rational’ target. CRU forecasts ironmaking capacity to be ~356 Mt/y in 2020 in these three provinces. If we apply the maximum of 40% to that figure, it equates to ~142 Mt/y of coke capacity, which means that ~38 Mt/y of existing capacity should have been removed over the period 2019–2020. 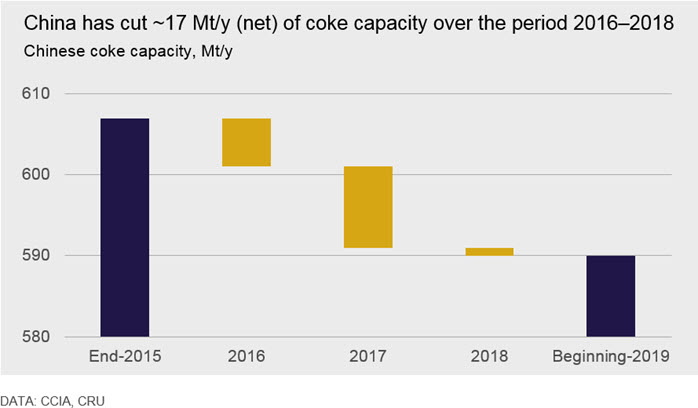 Similarly, merchant coke producers in Jiangsu province are also affected. The Jiangsu government released a document last year asking merchant coke plants in the neighbourhood of the Yangtze River and Tai Lake to close by end-2018. Meanwhile, merchant coke plants in other regions in Jiangsu have to close by end-2020. In particular, in Xuzhou city, where most of merchant coke capacity is located, the government has required that total coke capacity is cut by 50% by 2020, compared with that in 2018, with the remaining capacity to be consolidated into 2–3 big producers and relocated to industrial parks by 2020.

These examples indicate that the government is attempting to align coke capacity with ironmaking capacity in order to eliminate any surpluses. CRU forecasts that, in China, domestic steel demand will contract slightly in 2019, but will grow modestly in the medium-term. Meanwhile, the waning cost competitiveness of Chinese steel products and growing capacity outside of China, in particular Southeast Asia, will make sizeable steel exports from China unlikely. This will lead to largely stable Chinese crude steel production in near-term. However, hot metal production will fall due to a higher EAF share associated with EAF capacity growth and increasing scrap supply that, consequently, will reduce the need for coke. More importantly, technology and operational improvements at blast furnaces may further reduce coke demand in the medium-term. As a result, the government is unlikely to tolerate redundant polluting capacity in the country for too long.

Coke ovens to become larger and cleaner
Although Chinese total coke capacity is likely to fall, the impact will be differentiated by province. Shanxi province has the largest coke capacity in China, at ~134 Mt/y, due to adequate coking coal reserves and coal production. This makes it unlikely that Shanxi province will be as aggressive as Hebei, Henan, and Shandong provinces to target the ‘coke-ironmaking’ ratio of 40%. In contrast, Shanxi province will continue to benefit from their rich endowment of coking coal reserves and, consequently, will continue to export coke to other provinces. Having said that, changes will occur in that smaller coke batteries will be replaced by larger, cleaner batteries.

According to CRU’s coke capacity database, coke ovens with a chamber height over 4.3 m account for ~35% of total capacity in Shanxi but, based on government documents, this rate should be over 50% by 2020, meaning that 20 Mt/y of existed small coke ovens will have to be replaced by larger ovens. In order to achieve this target―and to show some progress―the government is encouraging replacement through the implementation of a ‘reduction swap’ programme, similar to capacity swaps in the steel industry. For example, for small coke ovens closed or registered to be close by end-2018, newer batteries of the same capacity can be built as a replacement. However, in 2019, replacement capacity of only 90% of closed capacity can be installed and this rate will further reduce to 80% in 2020.

In addition to getting bigger, coke ovens also need to meet emission standards through the installation of emission control facilities and also by applying Coke Dry Quenching (CDQ) technology. According to CRU’s coke capacity database, again, over 40% of coke oven capacity already applies CDQ technology, which can both reduce emissions and improve coke quality. CRU believes that there will be more CDQ installations to be seen in China. Meanwhile, although the main purpose of installing stamp-charging technology is to allow for more flexibility in the coal blend, without harming coke quality, stamp charging can also reduce emissions to some extent. However, there is not much room for China to further lift the share of stamp-charged coke batteries, as stamp-charging is already installed wherever possible. In addition to all captive coke ovens at steel mills and big merchant coke ovens with chamber height over 4.3 m, top-charging coke ovens capacity is only ~20 Mt/y.

In conclusion, Chinese coke capacity will likely continue to fall in the 2020s, though regional differences will be in place with most of provinces seeing reductions, while coke capacity in Shanxi will be largely stable in the medium-term. Meanwhile, average coke oven capacity will increase and more emission control facilities will be equipped to meet ultra-low emission standards. Lastly, the share of stamp-charging coke ovens will have limited growth, as most of top-charging coke batteries are large, modern facilities that are deployed to serve large blast furnaces. Since BF operators, in particular those operating large BFs, want consistency across the operation, they seek stable coke quality rather than operational flexibility. This will support continued imports of coking coal into China at ~50 Mt/y in the medium-term except for 2019 when underlying steel demand and consequent hot metal production will contract y/y. All these changes will have material impacts on Chinese coke industry, including coke producers’ profitability.