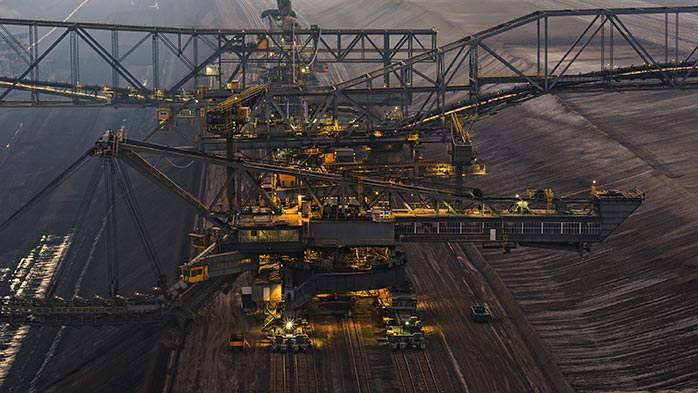 Restrictions on Chinese imports of Australian coal will increase the price of Chinese domestic coal compared with seaborne coal. If Chinese coke makers struggle to access imported coal, cost competitiveness will worsen compared with coke makers overseas and this will impact their ability to export.


Thermal coal prices respond, but little impact on met. coal
It was reported in February that Dalian Port, in North China, had banned Australian coal from being received. Furthermore, the time for Australian coal to clear customs at other Chinese ports lifted from ~20 days to 60–90 days. In the thermal coal market, this has already impacted prices; in the seven weeks since the restrictions were imposed (i.e. between 12 February and 02 April 2019), the 5,500 kcal/kg seaborne price has fallen by ~6% to $64 /t, CFR South China, whilst domestic prices in China have increased by ~8% to $93 /t, FOB North China. However, metallurgical coal prices have not behaved in the same way; domestic prices in China have increased by ~1% to $227 /t and seaborne prices have increased to $220 /t, CFR China, a ~2% rise since the restrictions were imposed. 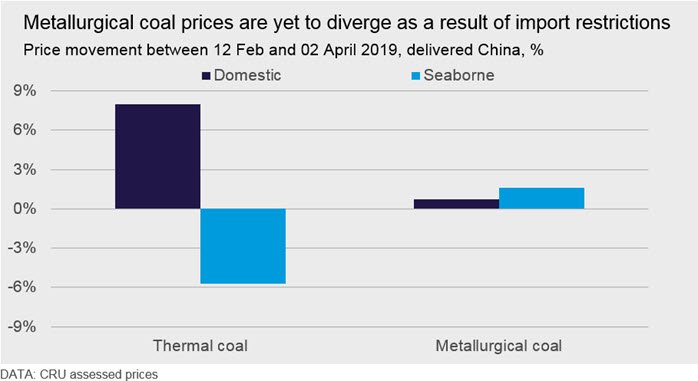 Continued supply disruptions in Australia have supported seaborne met. coal prices in the past few months. Furthermore, we have heard that, when the restrictions were initially announced, there was a sudden increase in demand from independently-owned Chinese mills. These mills, that are more free from government controls compared with their state-owned counterparts, rushed to procure high-quality Australian material whilst imports were still accessible and this further supported increases in the seaborne price relative to domestic prices. 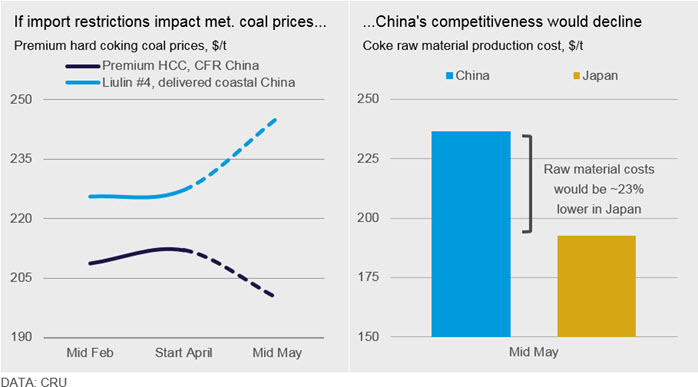 The above charts illustrate the rise in coke production costs for Chinese coke producers if domestic and seaborne coking coal prices diverge in the same way as has occurred in the thermal coal market. Raw material production costs for Chinese coke producers could become ~23% higher than those in other countries, such as Japan, which is fully exposed to seaborne coal. Chinese producers would attempt to pass this cost increase on to consumers in the form of higher prices, potentially leading to a loss in market share in the coke export market. India, the world’s largest importer of coke, would respond by substituting away from Chinese coke towards cheaper seaborne alternatives or by producing more coke themselves. Poland and Colombia, the world’s second and third largest exporters of coke respectively, may be beneficiaries as they have access to cheaper domestic coal relative to China under the import restrictions.

Similarly difficult conditions would be faced in the domestic market. Chinese coke producers would likely pass the cost increase from higher coal prices on to their customers, resulting in increased production costs for steelmakers compared with their overseas competitors. So, if the coal import restrictions are severe and long-lasting, both coke and steel producers in China will suffer from higher production costs and decreased global competitiveness.