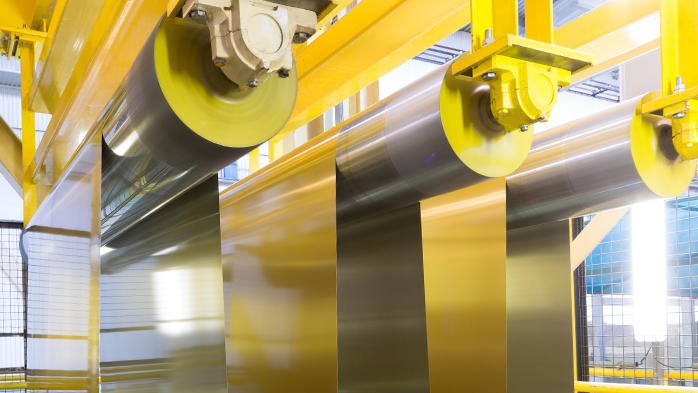 Two events have served as the catalyst for improved US rolling margins and have spurred numerous investments in capacity. First came the US anti-dumping and countervailing duty investigations on Chinese foil and common alloy products which decimated such trade between the two countries.

In the aftermath of the Section 232 and 301 investigations, China retaliated by slapping a 50% import duty on US aluminium scrap, again collapsing such trade.  The dumping cases brought life to a US rolling sector that had been struggling for years as rock-bottom Chinese prices compressed domestic margins.  The duty on US scrap imports pushed back massive amounts of scrap into the US market, pushing prices to historically low levels.


When you cut off imports from the largest producing country in the world the market is sure to go through a state of shock.  Although imports have seemingly been replaced, it required more than 10 countries to step in to fill the China void.  Diversification is one thing but managing multiple overseas supply chains can become a headache.  All else being equal, domestic-made product is certainly more desirable given its proximity.  With scrap offering a significant competitive advantage to US rollers, perhaps now is the time for additional investments in rolling capacity to capture margins not seen in many years.

US market has nearly filled the China rolled products void

Nearly 12-months removed from the implementation of preliminary CVD and AD on Chinese common alloy sheet, the US market has come full circle.  The initial thought of losing 38% of total US common alloy imports in one fell swoop sent shockwaves through the industry.  This prompted panic buying and overcommitment on behalf of importers and foreign mills.  As foreign mills overcommitted, delayed shipments began to pile up.  Importers were forced to scour the globe in search of supply that would meet nearby requirements.  Such holes continued to be plugged throughout the remainder of 2018 while foreign mills underperformed on delivery commitments, with some material arriving up to 4-5 months late.

2019 started off with a bang, with January imports of ex-China common alloy sheet posting a record high of nearly 88,000 tonnes.  February imports dipped slightly, but still posted the 2nd highest monthly figure on record.  A wave of late deliveries seemingly hit the US in March as such imports nearly reached 98,000 tonnes.  While the import faucet ran full bore, availability at various US mills began to open up for a variety of reasons including restarts, debottlenecking, and equipment optimization.  And here we are, a market once on the verge of a supply shortage, now in the midst of destocking that could last all of 2019. 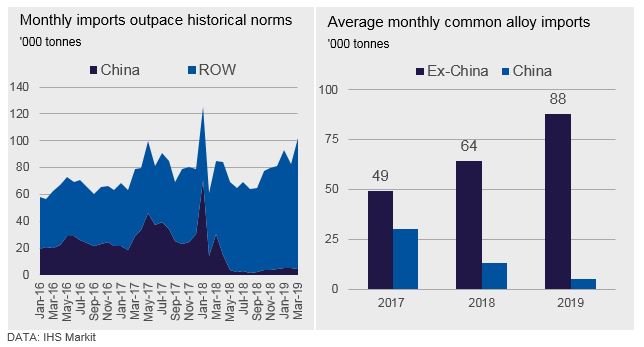 Domestic mills, service centres, and master distributors alike all report that common alloy standards are in massive oversupply. Service centres have also reported having inventory that is 2-3 months higher than desired, and that declaring contract minimums on volume or even passing on certain months is a likely scenario. This is not a reflection of weakness in underlying demand, rather a clear indication of being overwhelmed with incoming shipments that are severely late.

As destocking plays out over the next few months, the one factor that could swing the market back into a tighter supply situation is interest (or lack thereof) from abroad.  Total US common alloy imports through March are up only 6,500 tonnes, but Q1 2018 shipments are skewed by record Chinese imports ahead of the dumping duties.  However, at the current average pace of 88,000 tonnes of ex-China common alloy imports per month, the US is on pace to import an additional 283,000 tonnes than just a year ago.  Massive increases have been seen in 2019 imports from Oman, Indonesia, Taiwan and others, but a large driver of the gains could be a matter of timing.

But what happens when prices fall?  Import prices have taken a plunge since the beginning of the year which could result in foreign mills shifting focus from the US to other markets.  Nonetheless, with the market flush with inventory, it’s becoming crystal clear that imports will see a dip in the coming months.

In addition to the expected impacts of broader Section 301 tariffs on US imports of can stock which was discussed at length in our Aluminium Rolled Products Market Outlook, imports of aluminium plate and foil containers are also likely to suffer.  Although plate was not part of the scope associated with the AD/CVD investigation on Chinese common alloy, aluminium plate under HTS code 7606123030 (this would also capture re-roll / hot band over 6.3mm thick) is included in the newly proposed list of products to be subject to the 25%, Section 301 tariffs.

US imports of aluminium plate from China have increased significantly over the past 5 years, rising from just under 5,000t in 2013 to over 40,000t in 2018.  Imports are up an additional 9% through March of this year, although it’s unclear whether Chinese exporters would be able to absorb the 25% duty.  If not, US consumers would be left with the option of paying 25% more for Chinese plate, or switching sources to domestic or other import supply, both of which are currently higher priced.

Late last year, China’s Ministry of Ecology and Environment launched a new policy that will become effective on 1 July 2019, essentially banning the import of aluminium scrap under HS code 7602000090.  With 1 July quickly approaching, the rush to get aluminium scrap into the country seemingly started as far back as April.  Chinese customs data indicates that imports of aluminium scrap jumped 22% in April, posting the highest monthly volume in over a year.  Despite the large gain in April, YTD scrap imports are off 22%, with imports from the US, China’s largest source of imported scrap, down by nearly 40,000t. 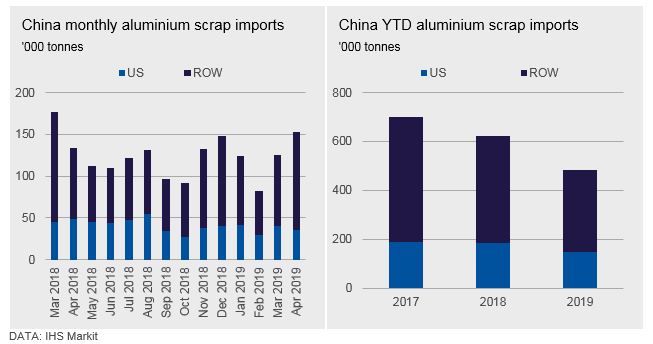 Although there is an import quota application process associated with the new policy, China scrap imports are sure to decrease going forward.  This will hit hard in markets like the US, which is already facing considerable supply pressure across the entire scrap supply chain. Scrap prices are at or below historical levels, with further drops being seen over the past few weeks leading up to the impending ban.

Is the market ripe for additional investment?

There have been 6 investment announcements at US rollers since September 2017, which came on the heels of the two anti-dumping cases.  These include the expansion by Granges at Huntingdon and the restart of the Newport mill.  Also, on the list is the $255m expansion of the JW Aluminum mill in Mt. Holly, and the Arconic investments at Texarkana (which was then sold to Ta Chen) and Knoxville.  Each of these investments is set to address the shortfall of foil and common alloy sheet capacity in the US market.