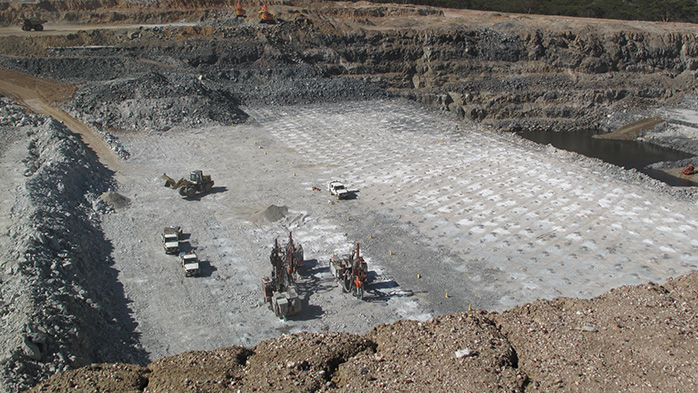 
The influx in spodumene production from the region, combined with short-term demand weakness, has weighed on lithium prices. This has prompted miners to react to the oversupply picture – most recently in Australia. We believe that these production curtailments are a sign of things to come in the global lithium market.

This is an abridged version of a Special Feature available on CRU Online to all Lithium Market Outlook subscribers.

Australia has led the surge in lithium supply growth
Lithium brine operations have long been the mainstay of global lithium supply. However, the strong lithium prices of recent years – in the face of the prospective demand surge from the EV sector – has prompted a flurry of investment in hard rock mining, despite its inherently higher costs (see graph below). There are several key reasons why hard rock mining has dominated the recent charge in lithium supply growth – you can find these discussed in more detail here. 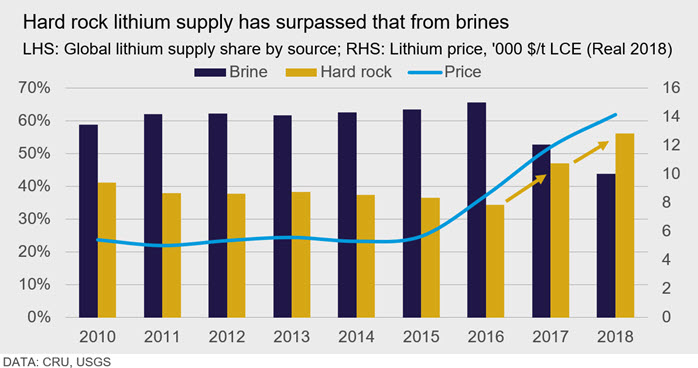 This investment has been particularly prevalent in Australia. The country hosts nearly a fifth of the world’s stated lithium reserves, in the form of spodumene-bearing pegmatite deposits. In just three years, six mines have commenced production, with two more advanced projects, several expansion phases and four chemical conversion plants in the pipeline. The country was by far the world’s leading producer of mined lithium units last year (see map below). 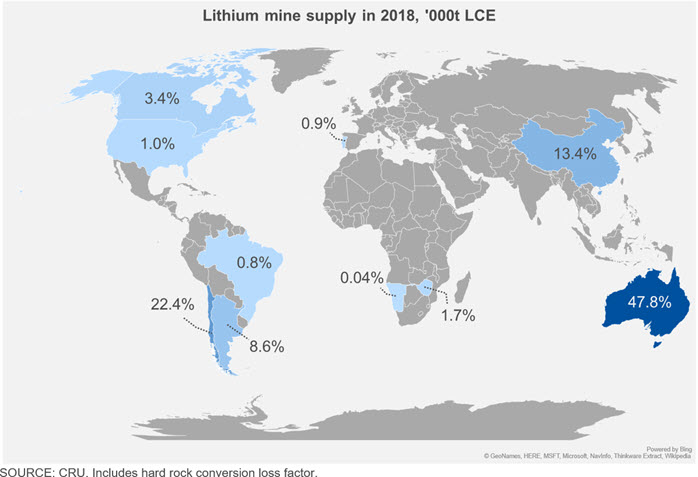 Influx of spodumene concentrate hits lithium prices…
Rising mine supply, notably from Australia, has pulled spodumene concentrate prices lower since H2 2018. Latest indications suggest that 6% spodumene concentrate shipment prices are trading either side of $600 /t CFR China, having been above $1,000 /t in Q3 last year. Lithium carbonate and hydroxide prices have similarly dropped, exacerbated by the larger-than-expected drop in Chinese EV subsidies in April.

The fall in spodumene prices has exceeded our original expectations for the decline this year, largely due to the bearishness pertaining to short-term demand. We now expect spodumene concentrate prices to average $650 /t for 2019 as a whole, with prices declining through the remainder of H2.

…prompting miners to take evasive action
It has long been CRU’s view that the lower-price environment will cause production cutbacks and the postponement of less-developed projects, to stop further raw material oversupply. We have seen some casualties since the start of the year – namely the Val d’Or operation in Canada, owned by North American Lithium, and AMG Lithium’s expansion plan at its Mibra mine in Brazil.

Now, it seems that Australian spodumene miners are looking to address the glut of spodumene supply coming from the country. Pilbara Minerals moderated production at its Pilgangoora operation in June and will continue to do so until October, to meet reduced requirements from its offtake partners. Both Ganfeng and General Lithium, according to Pilbara Minerals, are facing delays ramping up their spodumene conversion capacity in China. We estimate that mine production will be reduced q/q by around 20,000 tonnes of spodumene concentrate (3,000 tonnes LCE before conversion losses) in Q3.

Pilbara Minerals is also looking to slow and subdivide the development of its proposed Stage 2 expansion at Pilgangoora. This is to align capacity growth with the incremental increase in chemical conversion capacity. The expansion phase is expected to increase mine capacity to 800,000-850,000 t/y of 6% spodumene concentrate (119,000-126,000 t/y LCE), from its current 330,000 t/y (49,000 t/y LCE).

Elsewhere, Mineral Resources is progressing with the development of the 750,000 t/y (111,000 t/y LCE) spodumene concentrate plant at Wodgina. Western Australia’s Department of Water and Environmental Regulation (DWER) issued an Amendment Notice in mid-July, requesting additional information about water usage and recovery during the commissioning of the second train at Wodgina. These delays have perhaps helped to ease some of the oversupply of spodumene concentrate in the market. Furthermore, Albemarle – which is awaiting final approval to form a joint venture to operate Wodgina with Mineral Resources – has reportedly indicated that it will curtail production from the mine accordingly to track demand. This will almost be certainly required, given that Wodgina will become the world’s second largest spodumene mine once all three modules come online at the site.

Alita Resources, formerly Alliance Mineral Assets Limited, has temporarily postponed construction of an optimisation circuit (producing lithium fines) and other capital expenditure at the Bald Hill mine. This is while the company completes a strategic review, because of the current weak market conditions, and secures additional offtake partners. Alita is reviewing its existing offtake agreement with Jiangxi Bao Jiang Lithium Industrial Limited (JBJLIL), which operates a lithium carbonate line in China. This agreement has a floor price of $680 /t FOB for 6% spodumene concentrate. With spodumene prices currently trading below this level, JBJLIL could theoretically seek concentrate elsewhere at prevailing market prices, although this would be subject to rigorous specification and quality checks. CRU therefore believes that Alita may well be looking to renegotiate the deal to safeguard the offtake agreement for the future and ensure satisfactory pricing conditions for both parties. This is not without precedent – given the volatility of battery metals prices over the past few years, we have seen buyers renege on their contracts with suppliers elsewhere in other markets after prices dropped below previously agreed levels. China’s GEM stopped purchasing cobalt from Glencore late last year after prices fell below the level agreed in a contract signed in March 2018, forcing the deal to be renegotiated. Should spodumene prices continue to fall over the next few years, we could see similar price dynamics occur.

Further curtailments are likely
CRU sees this production moderation persisting for the foreseeable future. Australian miners have become, and will continue to be, key drivers in lithium market fundamentals. This is because of their ever-growing dominance in the spodumene supply chain and offtake agreements with leading Chinese downstream users. We expect them to trim output over the next five years to mitigate further oversupply of spodumene concentrate and have factored this into our supply forecast. This includes the slow ramp up of prospective expansion phases with lower weighting in our classification system, as they will be dependent on how initial production ramps up – as Pilbara Minerals are now suggesting. Even so, global mine supply looks to be plentiful until the end of our forecast period.

As a result, spodumene prices will likely continue to decline in the near term. We are subsequently conservative with our assessment of new projects’ viability and the likelihood of them entering the market. Mining companies with early-stage projects will struggle to secure financing in the current price environment, putting their development at risk – at least for the time being. They will be forced to weigh up the benefits of progressing their projects and assuring market presence ahead of longer-term demand growth, against absorbing shorter-term losses.

There is no doubt that Australia will consolidate its position as a hard rock powerhouse over the next few years. But the country’s miners look to be taking the first steps in attempting to stem the flow in falling spodumene prices. This, in our view, is symptomatic of the need to tackle the potential for further raw material oversupply in the global lithium market. Such is the strength of the project pipeline that – despite the longer-term demand story – there will both winners and losers in the lithium mining sector.