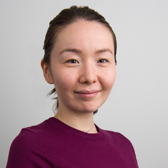 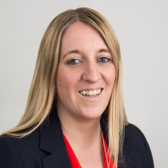 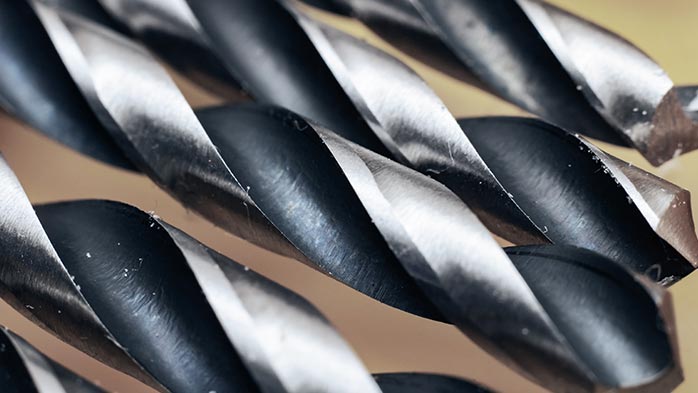 Tungsten is a vital ingredient used in a wide range of final products. Its special qualities in some key end-uses make it difficult to replace.


However, it is not a demand concern that keeps market participants worried, but one more fundamental to any resource market: will there be enough supply? In this Insight we explore the current supply outlook and review some of the major risks to the supply base.

Tungsten is a high-priced commodity, which is consequently used only in products where its performance justifies the cost of the raw material. This includes cemented carbides, high alloy steels and superalloys, electrical and electronic applications. Due to this wide range of applications, total tungsten demand is driven by a combination of developments in the broader world economy (industrialisation). 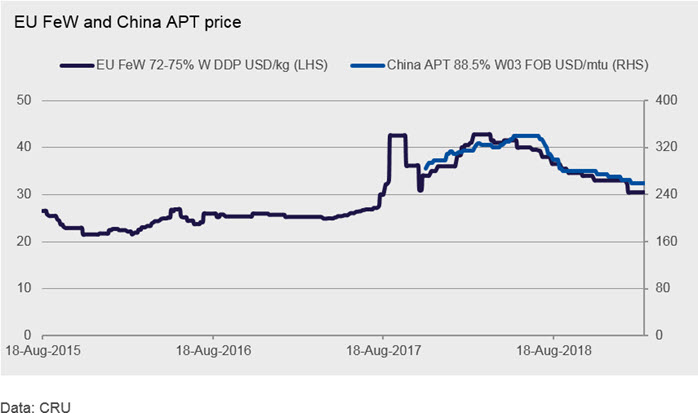 The tungsten industry has undergone tremendous change. In the last quarter of the twentieth century, sales from the US and later ex-Soviet government stockpiles, plus uncoordinated production from many small-scale Chinese mines, led to oversupply in the tungsten market. This resulted in market prices being depressed to the point where all but a handful of mines outside of China closed.

Since 2013, the world (ex-China) refined tungsten market balance has been negative and relatively static at roughly -13,000 t/y (tonnes per year). With the depletion of stockpiles and this negative balance holding up prices, in the last two years, industry attention has turned again to tungsten. Decreases in supply from existing producers have exacerbated supply shortages and have been caused by a variety of factors, including environmental regulations in China. 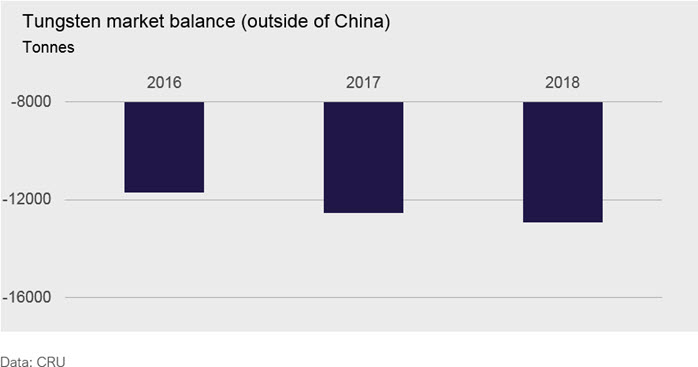 Will supply growth be sufficient?
China remains the largest supplier of tungsten so what happens in China has important repercussions for overall tungsten supply growth. The depletion of Chinese domestic resources is fostering doubts about China’s long-term ability to supply and CRU forecast Chinese production will continue to decrease.

Supply growth is therefore required to come from the mines outside of China. Few projects are currently in the feasibility-financing stage of development with the major factors limiting production from new operations include increasing operating costs and limited availability of high-grade ore. Definite changes in production capacity in 2019 amount to a net change of +4,500 t/y (when fully ramped-up), as major new projects, Barruecopardo and La Parrilla in Spain, and Sangdong in South Korea start production. However, additional capacity is still required.

Raising money for tungsten projects remains an issue
Many of the projects mentioned above had already been announced when CRU’s 2009 Tungsten Market Outlook was published. Several of these projects are starting production only this year, see Table 1. Overall, a very limited proportion of these projects came online, several failed and after a decade, some of the projects remain in our expected project pipeline. Considering this history, investors are naturally cautious. 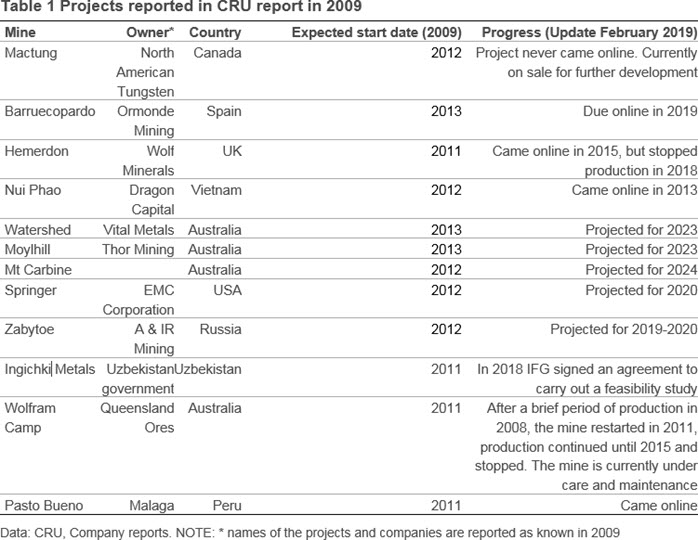 Trade tension between China and the US add to risks
The US reported in July 2019 that at least 22 tungsten products and rare earth materials would be on its import tax list, which covers $200 billion of goods imported from China. Products on the list need to pay 10% tax when being imported to the US. However, on September 24, 2018, it reduced by half the number of the tungsten products and removed rare earths.

In the past few months, the US has made efforts to reduce its reliance on Chinese tungsten products through diversifying its imports, including new material from Russia and Vietnam. That said, it has failed to fully remove itself from reliance on China. China accounts for 30% of total US imports. Tungsten exports from China to the US are about 10-15% of China’s total tungsten exports. 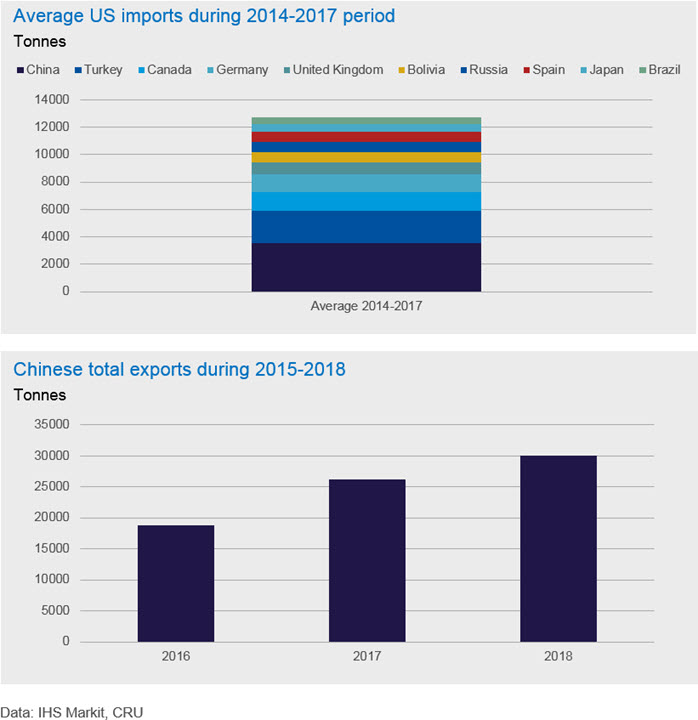 US demand for tungsten products so dominates the world market after China, this poses a serious risk to the US. With few alternatives to its current sources of supply, any future tightness (or indeed tariff) will inevitably lead to rising prices and even shortages for US consumers. The question arises then will it be possible for the US extricate itself fully from its reliance on a handful of major suppliers from China?

New projects required to maintain the market balance
Tungsten demand is predicted to exhibit stable but sustained growth given it is unlikely that:

Given that we believe production from current tungsten mines will be unable to sustain this growth into the future, there is a real need for new investment in modern, sustainable mine projects. CRU will be watching with interest the progress through financing and construction of the remaining proposed mining projects in Vietnam, Australia (x3), the US and Russia.

CRU’s specialist teams have developed robust methodologies for analysing financial and commercial risks in complicated and opaque markets, capturing the long term and uncertain nature of future market conditions. Our large Chinese team in Beijing support all projects where there is a need to understand better the role of China in specialist markets.

On 11 October 2021, the European Commission made an announcement on suspending the anti-dumping tariffs on certain Chinese rolled products into the European Union. So,...

How the EU CBAM will shape emissions costs