Coronavirus: what is the likely impact on copper smelting?

The number of people infected with the coronavirus in China has reached nearly 6,000, and Hubei province, which is home to 60 million people, has been put on lockdown since the outbreak.


From a copper smelting perspective, the province is of limited importance, accounting for only 3.9% of China’s 2019 blister production. Any impact on the neighbouring Anhui and Jiangxi provinces would be more significant, but all assessments remain highly speculative at this early stage.

Infections in China outnumber the 2003 Sars outbreak
In only a couple of weeks, the number of people infected with the coronavirus in China has reached nearly 6,000, surpassing the number of Sars cases in the country during the 2003 outbreak. The death toll has reached 132 in China, with confirmed cases reported in at least 12 other countries, including the US, Japan, France and Singapore.

Wuhan, as well as the wider Hubei province, has implemented strict transport restrictions. On top of this, the Chinese government has extended the Chinese New Year public holidays, to delay the mass migration of people back to work.

Daye is the only copper smelter in Hubei 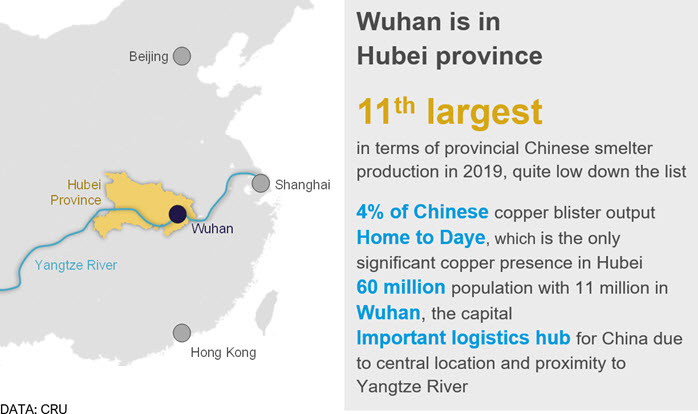 From a copper smelting perspective, the province of Hubei is of limited importance and centred around the smelting operations of Daye, located around 100 km from Wuhan. The company’s smelter produced 320,000 t of blister copper in 2019, accounting for only 3.9% of China’s total blister production. Moreover, market participants have confirmed that Daye’s smelter is operating at time of writing. The company also has a 400,000 t/y smelter project due online in 2021.

In comparison, Hubei’s copper mine production last year was minimal at just over 50,000 t out of a country total of 1.6 Mt. 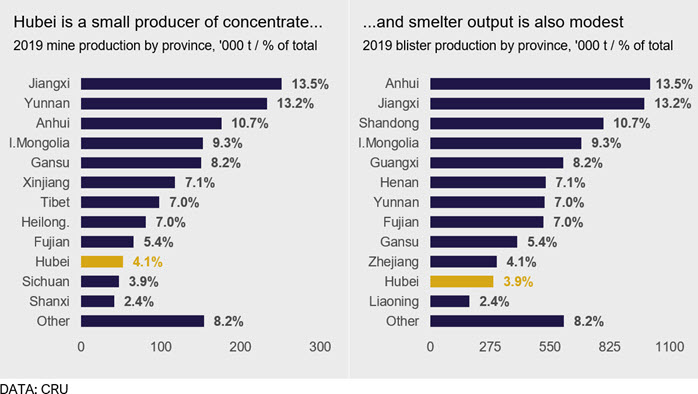 Participants wait to assess impact on concentrates market
Any assessment of the likely impact of the virus on the Chinese smelting industry and copper concentrates market remains highly speculative at this early stage. However, we do know that several market participants have confirmed cancelling travel plans to China, while we have also heard that a CSPT meeting scheduled for last week was postponed due to the virus, meaning that any further decisions regarding previously proposed smelter production cuts have not taken place.

As is typically the case, the concentrates market has been quiet in the leadup to the Chinese New Year holiday. The added impact of the coronavirus means that a delay to post-holiday re-stocking is highly likely, which will impact the market.

There are many unknowns around the likely extent of the virus’ spread, the Chinese government’s response, further transport restrictions, and any impact on logistics. It is worth noting that the Anhui and Jiangxi provinces (neighbouring Hubei to the East) are more important in terms of blister production, collectively accounting for around 25% of China’s smelter output. Any production cuts in these regions would point to a more significant impact on the Chinese smelting industry and would likely to soften the concentrates market in the short term, but any scenario remains highly speculative at this point. 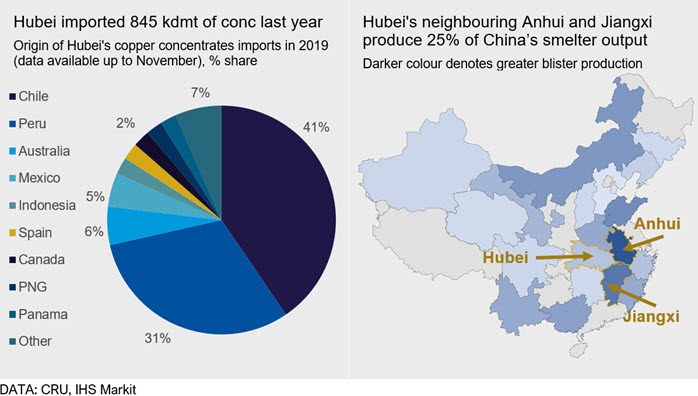 Explore this topic with CRU
Want to read more? Register to continue reading and gain access to all CRU Insights
Copper Covid-19
Top