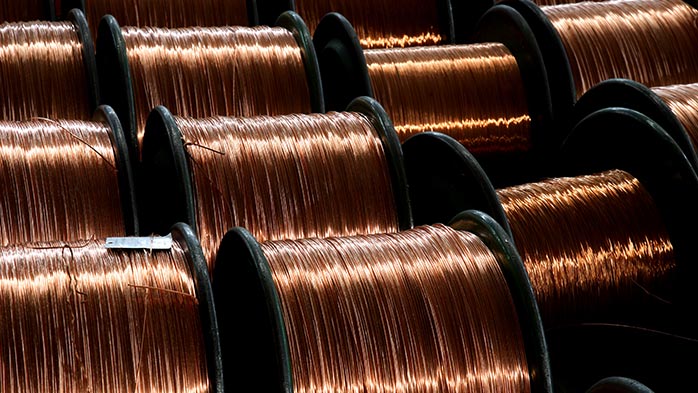 In the aftermath of the supply and demand crisis caused by Covid-19 in early 2020, the wire and cable market first stabilised in China and then in the rest of the world, albeit to different effect. World cable demand has very much become a tale of two halves.

The rebound in China has been solid since the economy re-opened in March/April. CRU was once expecting Chinese cable demand to contract by 6% y/y in 2020, in terms of volume. We now forecast domestic demand to grow, albeit marginally, now accounting for 36% of global market share.


China’s Q3 GDP grew by 4.9% y/y, up from a 3.2% y/y increase in Q2. Despite the growth, this is just shy of expectations, the figures are unthinkable for the rest of world that is still grappling with the impact of the virus, and the growth has been relatively metal intensive. IP, Fixed Asset Investment (FAI), and grid investment all turned into, or close to, positive growth year-to-date August. In fact, IP and FAI expanded by another 6.9% y/y and 8.1% y/y in September respectively, according to the latest statistics.

However, CRU forecasts world ex-China cable demand will contract by near double digit rates this year. The recovery in North America and Europe is underway, despite at different paces, with the former recovering at a faster speed. Demand in other emerging economies is also recovering, but the early weakness will push several regions into double-digit decline for 2020. As such, we forecast world insulated metallic wire and cable demand will contract by around 5-6% y/y this year.

For the global wire and cable market, despite the expected rebound in demand in 2021, overall cable consumption will still be 1% lower than 2019 and 4% below its pre-Covid-19 forecast by the end of 2021. In other words, world cable demand will not exceed 2019’s levels by 2022. However, CRU forecasts market value will bounce back even stronger next year, reaching almost US$180 bn, as we expect copper prices will remain elevated throughout much of 2021. 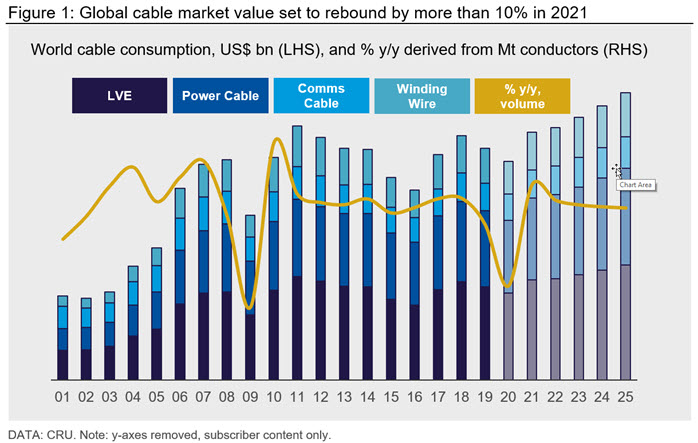 CRU estimate global optical cable demand in Q3 recovered well from the Q1 and Q2 multi-year lows. In fact, it is the first time in seven quarters that global cable demand has increased on a year-on-year basis. Much of this growth can be attributed to China, which grew by more than 10% y/y in Q3, led by a renewed push in 5G network construction.

However, since the last update, CRU have made a number of downward revisions to cable demand in both western and eastern Europe. Whilst initially we were anticipating a slow recovery in Q3 and Q4, due to a resurgence in Covid-19 cases and renewed restrictions and lockdowns, it has become clear that demand in Q4 will once again suffer. Cable deployments are being stifled once more by skilled labour shortages. Marginal upgrades in the US and Taiwan have helped offset this weakness somewhat, although we still expect total global demand to slip just below the 470M F-km level this year.

Therefore, we now forecast global optical cable demand to contract in the region of 2% y/y in 2020. Whilst some market weakness, for example in India, can be attributed to other factors or issues at carriers, the overarching reason behind the global contraction in optical cable demand forecast for this year can be directly attributed to Covid-19. Although the US has seemingly been unaffected from a demand perspective, and China recovered quickly, for all other major telecom nations it has significantly impacted cable deployments.

Of course, there are some silver linings from such a pandemic, such as an acceleration of digital trends, a renewed focus on fixed line and more aggressive FTTH targets, alongside eliminating digital divides. However, the impact to cable demand has been negligible to-date, much of this demand will be deferred to next year and beyond, whereby CRU remain optimistic about cable demand prospects.

Looking ahead to 2021, the recent decision by China Telecom to cancel their previous buoyant tender of 75M F-km and instead re-issue a tender for just 45M F-km next year has however, raised concerns within the domestic Chinese market.

We cover the above and more detailed research in our Metallic Wire and Cable Market Outlook and Telecom Cables Market Outlook. Here we include demand, supply (plant by plant), trade and price forecasts for the next five years broken down by major regions and countries. 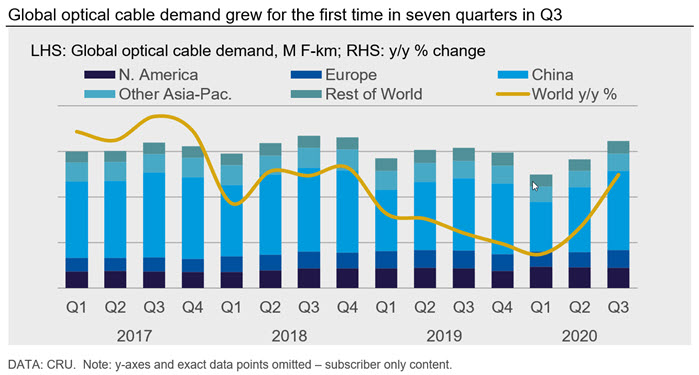