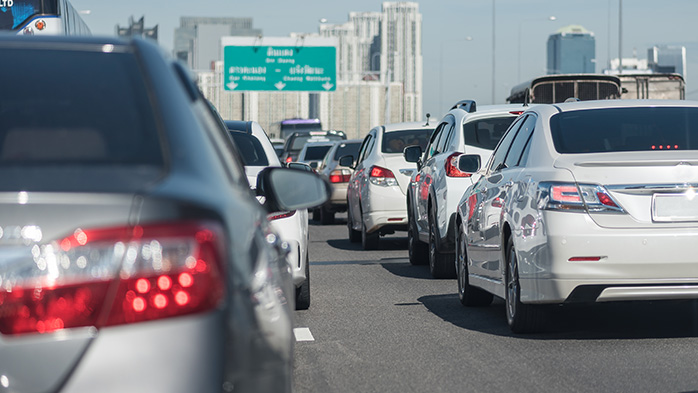 As of 1st January 2020, new tighter CO2 emissions limits came into force for new cars sold in the EU.


It appears that the existing pattern of EU car sales does not meet the new requirements and for some OEMs the gap to compliance may be large. On balance we think that this situation presents a net negative to the demand outlook for steel from the EU automotive sector in 2020, relative to its current pattern.

The situation: the new target will be a stretch to achieve
The new target is EU fleet-wide average emissions of 95g CO2/km for new cars (full policy available here). A target of 130g CO2/km has been in force since 2015 and has been achieved and surpassed, however the 27% tightening of the target for 2020 looks to be a stretch goal relative to recent actual emissions: 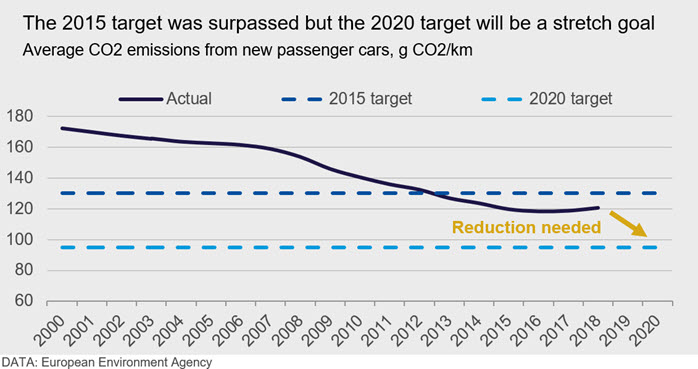 Detail around the target means that in 2020 it is to some extent “soft” – full implementation of the target on all new EU car sales is scheduled for 2021 but has a phase-in this year meaning that it is applicable only to the lowest-emitting 95% of sales. The target is also manufacturer-specific and adjusted for the average mass of vehicles sold. This means that manufacturers of on-average heavier cars have a higher target.

Other refinements include a “super credits” system that allows each 2020 sale of a vehicle emitting less than 50g CO2/km to count as two vehicles in the calculation of a manufacturer’s overall average. This system will be tapered out over 2021 and 2022. Credits against emissions can also be granted where vehicles are sold equipped with “innovative technologies” that allow emissions to be reduced. Currently-approved such technologies include LED lights, an engine idle coasting function and a battery charging photovoltaic roof.

The penalty for non-compliance with the 95g target is a severe financial one. In the event that a manufacturer’s average fleet emissions exceed the target, the penalty payment will be €95 per g CO2 over the target, per car registered by the manufacturer in the EU in the year.

The possible responses: few signs of upside risk to steel demand
What options exist for auto OEMs, and what do they mean for steel demand?

Fail to comply and pay the fine
This is a valid option in principle and would mean little change to the current structure of EU automotive steel demand. But it would probably be highly financially damaging. The magnitude of the direct financial penalty is very large as illustrated in the chart below, calculating what the total penalty would have been for actual 2016-18 EU registrations had the 2020 target already applied: 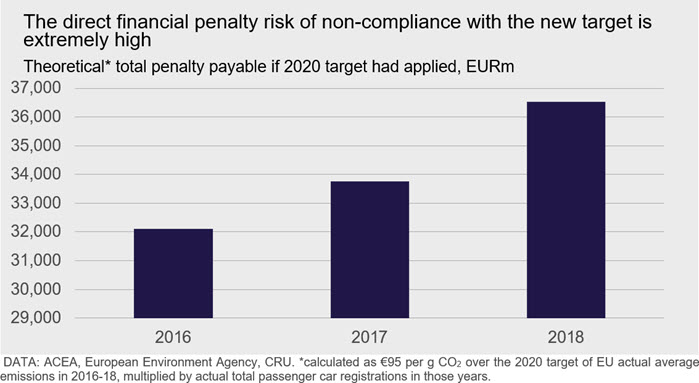 In addition, it is worth considering secondary effects of this option. An auto OEM paying this fine would divert funds that might otherwise have been invested to ensure future compliance; meaning in turn that it becomes more likely the fine will become an annual event. Furthermore, it seems likely that any such OEM would suffer significant brand damage in the eyes of EU consumers, being seen to be the polluting option and thus undesirable as a vehicle choice.

Therefore, something probably has to change.

Switch as much as possible to selling low-emissions vehicles; hybrids and EVs
The obvious option is to comply with the new target by selling a higher share of lower-emitting cars than has been the case to date. That is easily said and not so easily done. From the supply side it is not clear that manufacturing capacity exists at every required stage of the value chain to supply large volumes of such vehicles, though admittedly many new low-emissions model launches are due in 2020. And from the demand side there remains significant inertia from consumers to committing to fully electric vehicles, partly because the supporting infrastructure for charging them is lagging and partly because they are a high capex option for the consumer, even if opex can be lower than for an internal combustion engine vehicle.

CRU’s current forecast already incorporates a very strong ramp up of non-internal combustion engine (ICE) vehicle sales in Europe. However, this is from a low base. Despite huge y/y growth rates we expect these to reach only 8.3% of total West European sales in 2020, with the majority being hybrids rather than full EVs.

From the perspective of automotive steel demand one key question to ask is whether a non-ICE vehicle consumes more or less steel than an ICE vehicle. The answer is complex. A fully electric vehicle does not require a conventional powertrain, exhaust system or fuel tank, which are all steel-intensive. But it does require other things not present in an ICE vehicle such as a battery housing and electrical steels in motors. The car’s structural and closure elements are more or less unchanged requirements. Perhaps on balance the total steel volumes required are about the same to slightly lower, though there are different types of steels needed. Note that we are not in this piece considering steel demand arising from EV support infrastructure but only in the vehicles themselves.

In the case of hybrid vehicles, the steel demand per vehicle is probably increased because of the need to include both ICE and electric power systems. Given our expectation that hybrids will be the “first wave” this could present some increased steel demand in the short term. But note again that the share of non-ICE vehicles in the total sales mix is expected to remain small in the immediate future, so this increase will also be small.

Fudge it and muddle through
Multiple options exist here:

A combination of all the above will probably be the result
It is unlikely that OEMs will follow just one of these approaches, unless it is taking the route of total non-compliance. But the only approach that suggests a volume upside to today’s pattern of automotive steel demand is raising sales of hybrid vehicles. And even that approach is unlikely to yield a large amount of volume upside; after all, weight remains a crucial issue for vehicles. Overall, we find it hard to see how the changes that the new emissions standards will bring can result in a material volume increase to the current pattern of European automotive steel demand.