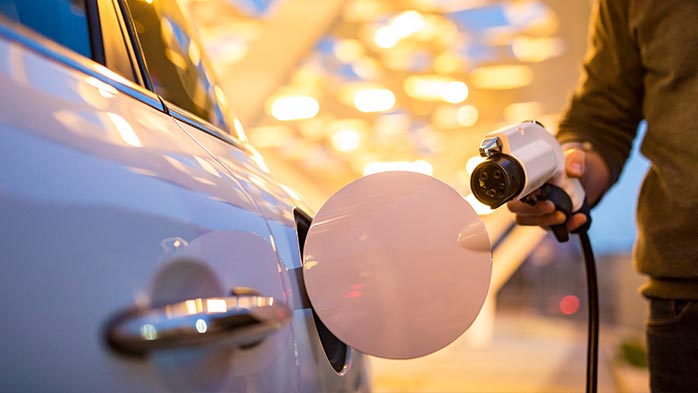 Over the past three months, a combination of higher demand expectations and further supply cutbacks has changed CRU’s 5-year balance views.


At first glance, the market balance could be interpreted as being at risk of entering a sustained deficit by 2022 – two years earlier than we originally thought – with this deficit rapidly accelerating into a “lithium cliff” scenario by the mid-2020s.

However, the reality is more nuanced. There remains ample new supply in the pipeline in the form of underused capacity, closed mines and brownfield expansions which will be accelerated as a result of an expected deficit. We believe that rising demand and an uptick in prices will stimulate the return of this supply in 2022-2023, keeping the market balanced over the next five years.

The lithium market needs price growth to stimulate new supply. However, we do not expect a price shock akin to what was seen in 2016-2018. At that time, supply growth came almost entirely from greenfield expansions which required very strong price stimuli to be accelerated – often up to 75% over marginal costs ($14 /kg LCE in practice). This time, new supply is likely to come from better capacity utilisation and reopening mines. We believe that prices below $11 /kg LCE are sufficient to stimulate this new supply – and much of this is profitable even at today’s price levels ($8.75/kg LCE).

EV forecast updated amid stronger OEM pledges
In the short-term, CRU’s electric vehicle forecast remains largely unchanged since November. We have downgraded our 2020 sales expectations of NEVs in China (BEV+PHEV) to 1.35 million units from 1.5 m units, and our forecast EV sales growth in North America and Europe remain conservative for now, to account for teething issues with building scale. More information on the impact of COVID-19 will be available in the April report. 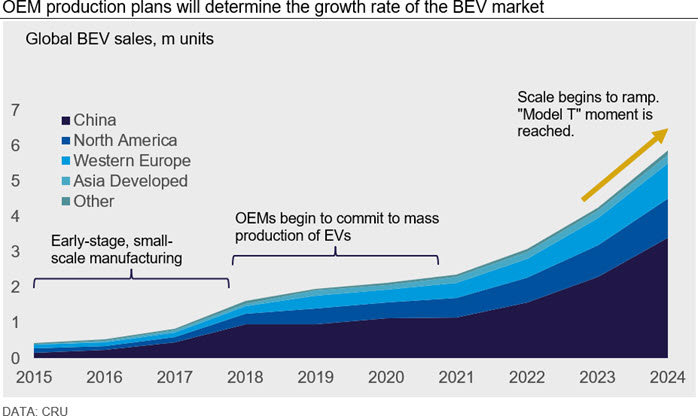 CRU’s 5-year BEV forecast is derived mostly by considering manufacturing plans on a company-by-company basis. In the last few months, two key announcements have caused us to increase our forecast.

Electric vehicle market expectations are the single biggest source of risk and uncertainty in the lithium market. As a result of our demand upgrade, we now expect lithium demand to grow to 679,863 tonnes LCE by 2024, compared to 630,320 tonnes in our last report. We estimate that 2019 demand was 309,945 tonnes, meaning that we expect a 2019-2024 CAGR of 17%.

Production cutbacks continue as miners dash for cover
The downturn in the lithium market over the last 12 months has stimulated a wide range supply cutback measures, with most of these being in Australia. We have summarised these cutbacks below. 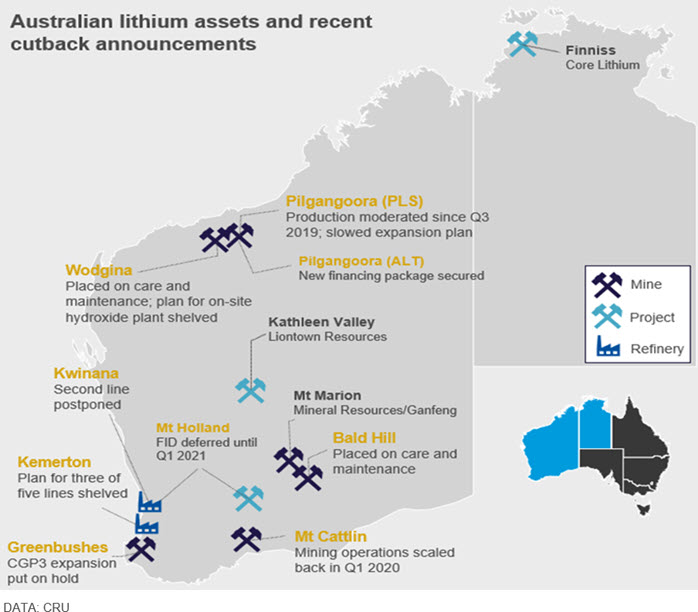 Most of these cutbacks were announced and enacted in the second half of last year in anticipation of prices crashing to below $10 /kg LCE. The key changes since November are as follows.

The “Lithium Cliff” is looming… or is it?
If one were to take a snapshot of current supply plans and expected demand it would appear that the lithium market is about to swing into a sustained deficit from 2022 onwards, ushering in the “lithium cliff” which has long been theorised by perpetual market bulls. We illustrate this in the chart below. 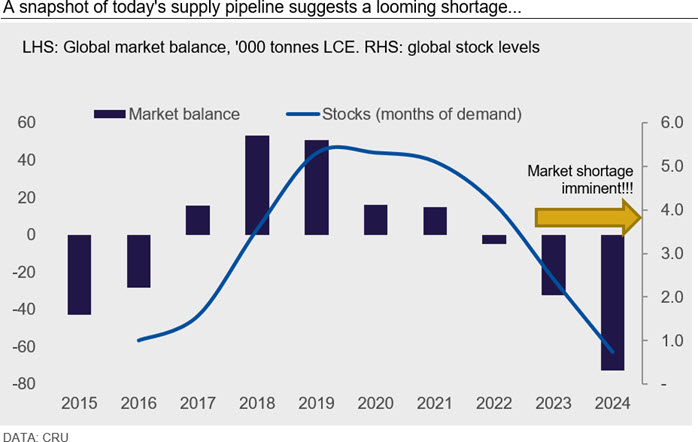 However, this is not our base case view and CRU urges caution when considering a supply-demand balance in isolation. If one extends the supply-demand balance for any commodity far enough into the future, taking only existing operating or committed supply, then one could construct a scenario where the market appears to be on the cusp of an extreme shortage.

A more nuanced method of analysis is required as supply will be more reactive and new sources of supply will enter the market. One must look at the supply pipeline as a whole, not just confirmed or operating projects. The extreme deficits shown in the chart above, do not account for ‘probable’ lithium projects – and even in a high demand scenario (1 m tonnes by 2025), there is enough supply pipeline to keep the market relatively well-supplied (assuming that a good portion of this supply comes online in a timely fashion). 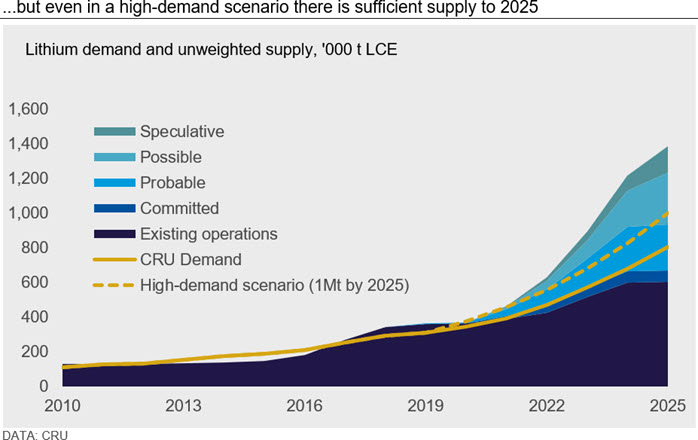 This supply will not be stimulated until there is enough demand and price support to merit it. CRU’s current base case for the next 5 years is as follows. 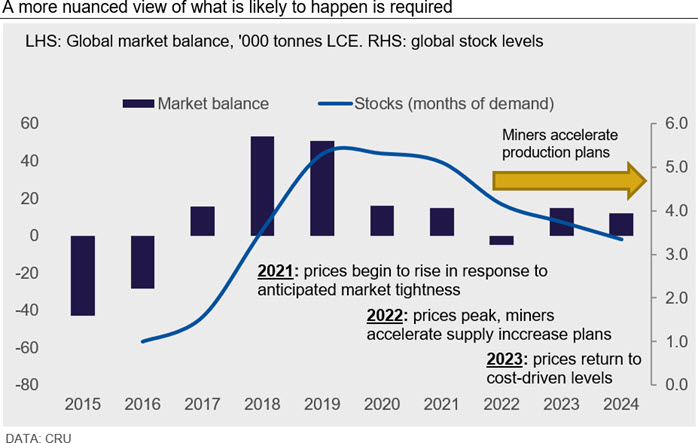 We are not on the cusp of another 2017-2018 price run
CRU believes that prices will need to increase in the mid-term in order to stimulate new supply. At first glance, this situation might appear to be similar to the price run and supply response that we saw in 2017-2019. Some industry participants expect that prices are likely to creep back up to 2017-2018 levels as the “new normal” (~$14/kg LCE in 2018, $real 2018).

However, again CRU urges caution. Today’s lithium market has changed radically compared to even a few years ago. Between 2015 and 2019, we estimate that over two thirds of all new supply came from the development of greenfield projects, as shown in the waterfall chart below. 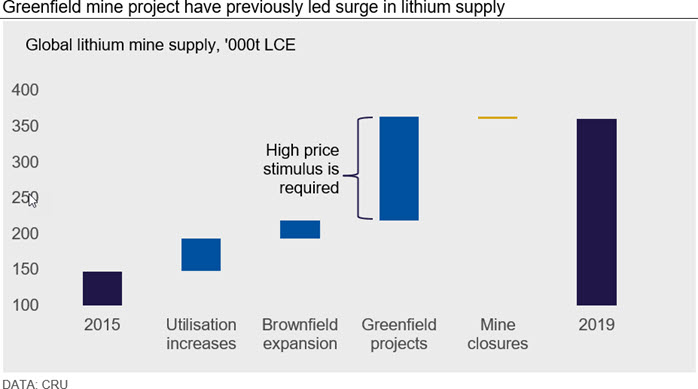 By contrast, CRU expects that just 16% of new supply over the next 5 years will come from greenfield projects, with the much of the remaining 84% coming from better capacity utilisation at existing projects. This is illustrated in the waterfall chart below. 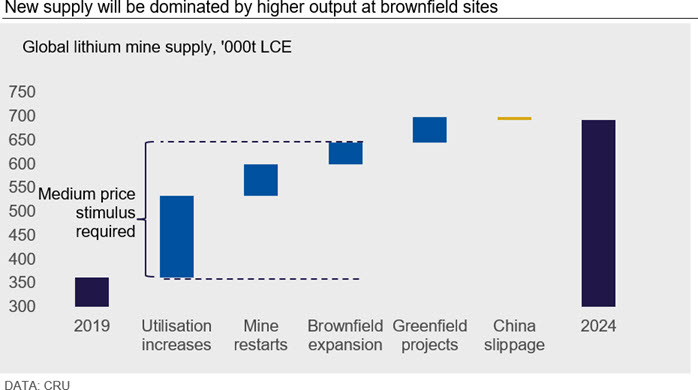 This distinction is extremely important when discussing price expectations. The 2015-2019 greenfield expansion in the lithium sector naturally required a very heavy price stimulus to bring on new supply, with contract prices temporarily reaching 75% over the marginal cost producer at times. By comparison, the supply response we will see in the coming years will not require as strong a price increase – and much of the additional supply could even come online at today’s prices, once the demand is there for it.

Consequently, we expect nominal contract prices to remain flat at $9/kg LCE over the next two years, before increasing to a peak of $10.4/kg LCE in 2022 (with prices peaking at $11/kg LCE in Q2 2022). From 2023 onwards, we expect prices to ease back to cost-driven levels once new supply is secured. All commodity markets are inherently cyclical, and lithium may need another high price cycle to stimulate another wave of greenfield expansions sometime in the future. Unless demand grows substantially faster than we expect, then sustained mid-teen prices ($real 2018) over the forecast period are highly unlikely. 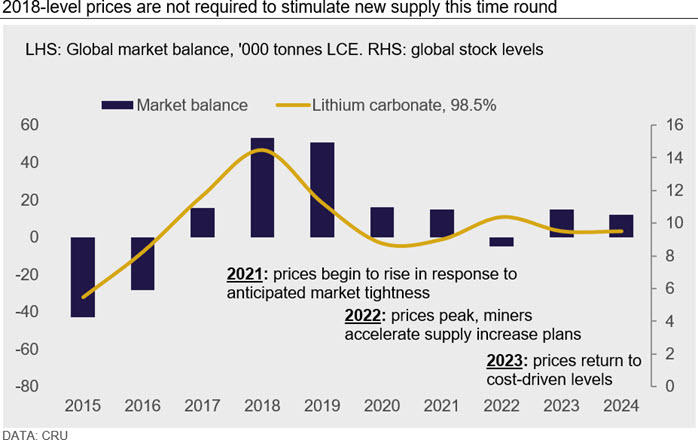 Explore this Topic with CRU
Want to read more? Register to continue reading and gain access to all CRU Insights
Technology Metals
Top