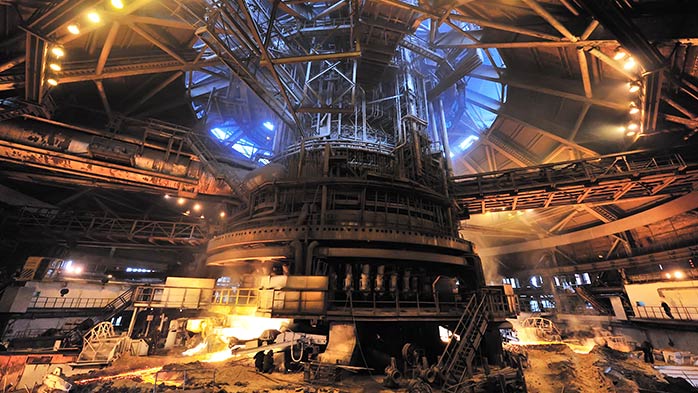 Climate change is moving up the political agenda and putting increasing pressure on heavy industry to reduce their CO2 emissions.


As the largest producer of global industrial CO2 emissions, the steel sector has a clear role to play in meeting emission reduction targets. Based on current global projections relative to a 2-degree warming scenario (n.b. 2DS) the industry will need to make significant changes to meet global climate targets. 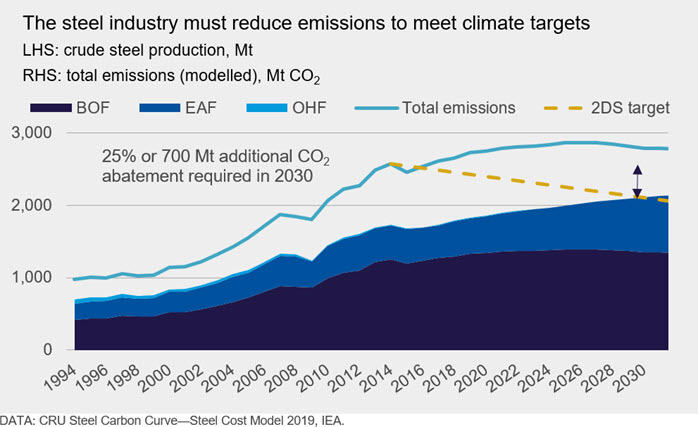 There are a variety of options available to steelmakers to reduce the CO2 intensity and overall emissions of their steelmaking―from improving process efficiency to fundamental changes to plant technology. Research to-date has largely focused on breakthrough technologies, such as hydrogen steelmaking or carbon capture/reuse. But are these the only options and, given the capital intensity of steel production, how do they fit within the industry in its present-day form?

Introduction
To date, climate change initiatives in the steel industry have been concentrated in the EU. In 2017, Sweden’s SSAB announced its intention to remove fossil fuels from its steelmaking by the 2040s through a combination of EAF steelmaking and hydrogen-based ironmaking. In 2019, ArcelorMittal―the world’s largest steelmaker―announced that its European plants would be carbon neutral by 2050. Several other European steelmakers, mostly blast furnace-based, are also researching various initiatives to reduce their emissions. The regional focus of these low carbon steel initiatives is largely due to the EU’s Emissions Trading Scheme, which has increased the cost of emitting greenhouse gases in heavy industry in the region and provided an economic incentive to EU steelmakers to reduce emissions. 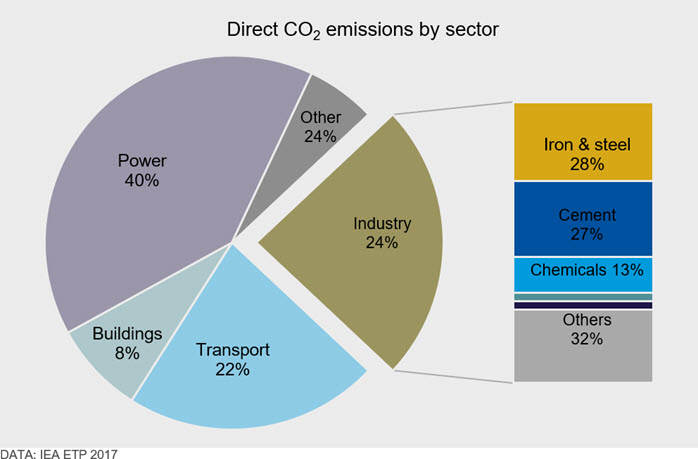 Having said this, steel industry CO2 emissions are not just a European concern: 186 governments across the world have signed up to emission reduction targets following the Paris Agreement in 2015. The emission reduction targets vary by region, but many of the major steel-producing countries have agreed to reduce total emissions by 15–40% by 2030. Globally, the steel industry is responsible for ~7% of total global CO2 emissions and is the largest industrial emitter of CO2 after power generation[2]. It is clear then that the steel industry bears a duty to reduce the carbon intensity of its output if countries are to meet increasing tighter emissions targets. In addition, growing public and investor discontent towards heavily polluting industries means that steelmakers increasingly feel the need to demonstrate green credentials simply to have a social licence to operate.

But what are the options available to steelmakers? The decarbonisation technology choice will vary from plant to plant, depending on the existing technology used and steel product mix produced, as well as the timeline and magnitude of emissions reductions sought.

For countries to meet emission targets, it is clear that there will need to be a significant change to the way steel is produced globally, with an average CO2 intensity in the range of scrap-based EAF steel producers needed to meet the most ambitious targets. The chart below highlights both the scope and scale of the challenge that the industry faces over the coming decades. 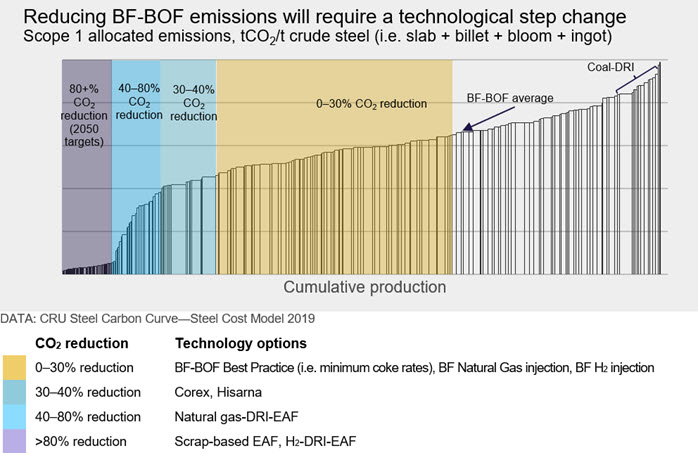 The impossible step change to EAF-level emissions
The amount of CO2 a facility emits and the CO2 intensity of the steel produced is directly proportional to the amount of carbon that enters a facility. 100% scrap-based EAFs produce steel with the lowest CO2 intensity as the carbon inputs are mostly in the form of graphite electrodes, natural gas and small quantities of injection coal for slag foaming. Carbon is also contained in iron-based metallics, such as pig iron and DRI/HBI, and, as the proportion of iron-based metallics increases, so too does the CO2intensity of EAF steel production. In BF-BOF steelmaking, carbon in the form of coal and coke, that is needed to reduce iron ore, is the primary contributor to CO2 emissions.

The step change to EAF-level emissions
The amount of CO2 a facility emits, and the CO2 intensity of the steel produced is directly proportional to the amount of carbon that enters a facility. 100% scrap-based EAFs produce steel with the lowest CO2 intensity as the carbon inputs are mostly in the form of graphite electrodes, natural gas and small quantities of injection coal for slag foaming. Carbon is also contained in iron-based metallics, such as pig iron and DRI/HBI, and, as the proportion of iron-based metallics increases, so too does the CO2 intensity of EAF steel production. In BF-BOF steelmaking, carbon in the form of coal and coke is the primary contributor to CO2 emissions.

So, why can’t the world move to 100% scrap-based steelmaking? We can look to developed economies to understand this.

In the USA, EAF steel production accounts for ~65% of total crude steel production and that share is steadily increasing. Two factors have slowed the complete takeover of EAFs in the USA―challenges producing grades on a par with BF-BOF producers and limits to prime scrap supply. EAFs producing high quality flat and long products require a ‘clean’ iron input such as DRI/HBI and/or pig iron to dilute residual elements (e.g. copper) that can be present in scrap steel at different levels depending on its source and degree of sorting. As a result, the overall iron-based metallics charge for EAFs is ~25% for US flats producers.

Even disregarding quality issues, on a global basis, there is not enough scrap generated to meet the total demand for crude steel, the difference between required demand and supply is estimated to be over 1 bn t. When yield losses are factored in, the gap between scrap generation and crude steel production widens further. 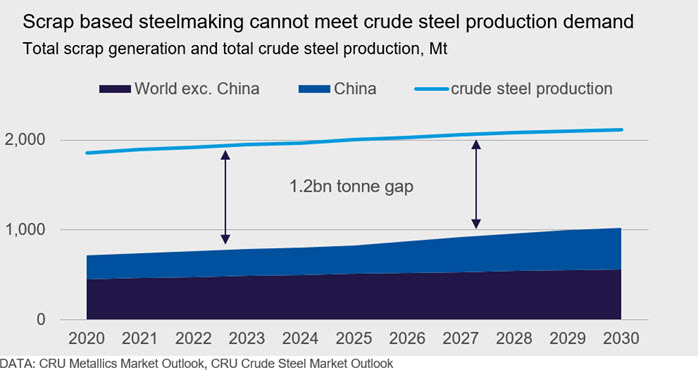 If steelmakers want to reach the lowest levels of CO2 emissions for high quality steel, switching to the EAF is not enough: steel producers must find a way to reduce the emissions generated when producing the necessary ‘clean’ iron inputs as well.

The role of carbon in ironmaking
Carbon has played a fundamental role in the production of iron since the earliest days of iron ore smelting. In order to convert iron ore (i.e. iron oxide) to iron metal, the ore needs to be reacted with a reducing agent, typically carbon monoxide (i.e. CO) generated from carbon, to separate the oxygen from the iron oxide molecule.

With the reducing CO gas being generated by the reaction

Carbon, in the form of coal, coke or natural gas, is the source of the reducing agent for almost all iron production worldwide.

Below is a chart showing CRUs Ironmaking Carbon Curve. This chart combines emissions from blast furnaces, DRI and Corex units covered in the cost model. The total emissions intensity is highly dependent on the reducing agent (i.e. coal, coke or natural gas) used in each ironmaking process, the plant efficiency and the calorific value of the coal used.

As can be seen in the chart above there is a wide range of CO2 intensities over which iron is produced globally. The fundamentals of blast furnace ironmaking are constant no matter where you are in the world yet some BF operators are producing iron at more than twice the CO2 of other operators. It is clear that operating practices and parameters also play a key role in the CO2 intensity of blast furnace iron production.

Great steps have been made in the recent decades to reduce the amount of reductant used in blast furnace ironmaking, particularly in Europe. BF producers in countries such as China and India are utilising greater amounts of coke on average in their BFs. Targeting best operating practices is, therefore, a logical first step to cut emissions for many producers. A reduction to the coke rate and/or substituting coke with PCI injection leads to a more than 1:1 decrease in CO2 emissions as the fugitive and process emissions associated with the coking process are subsequently decreased. 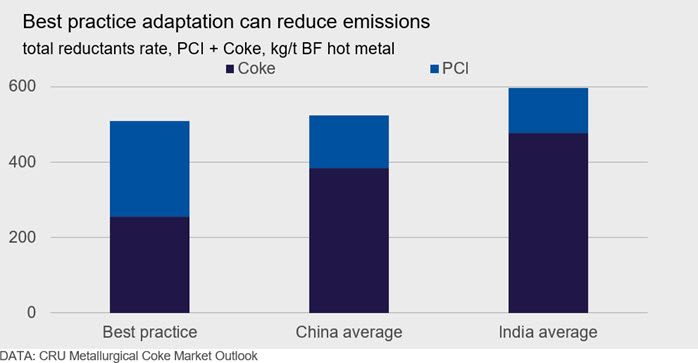 So, what if you’re already utilising best practice?
For producers in countries that are currently maintaining best practice, a significant step change in technology will likely be required to make further reductions. This will be achieved by either one of two paths:

The key to reducing the amount of carbon as an input into the steelmaking process is through consideration of the reductant. Steelmakers can eliminate the reductant altogether (i.e. through scrap-based EAF steelmaking, but only where scrap is available) or switch to less CO2 intensive reductants. At present, most of the research by BF-BOF producers has focused on reducing reductant emissions. Analysis of the CO2 emissions for the major reducing agents is shown below. Natural gas, which has the lowest emission factor of all the hydrocarbons, also has the highest hydrogen to carbon ratio. The reductant with the lowest emission factor that is currently being trialled in several different steelmaking applications is hydrogen.

Hydrogen-based steelmaking is currently receiving a lot of attention, especially in Europe, as several major steelmakers are experimenting with various means of replacing carbon-based reductants with hydrogen in both the BF and DRI processes. However, despite its low CO2 emissions in the steelmaking process, most hydrogen today is produced from fossil fuels and, therefore, has its own CO2 footprint. The technical challenge to steelmakers is, thus, twofold: (1) how to replace carbon with hydrogen and (2) how to source ‘green’ hydrogen that is sufficiently cheap and plentiful. The current progress of this technology means that it’s unlikely there will be any significant shift to its adoption for at least the next decade. Critical to the large-scale adoption of hydrogen-based steelmaking will be supporting infrastructure and, in particular, hydrogen storage, as well as the development of low CO2 hydrogen production routes.

While a large amount of research has been directed at alternative steelmaking technologies, another option that is available to steel producers is capture and storage, or capture and use, of the CO2 emitted from conventional steelmaking processes. Carbon Capture and Storage (CCS) is an example of another technology that has received much attention in recent years. CRU’s research into CCS in China shows that steel production costs could lift by $70 /t if CCS was implemented and that CO2 emissions could be reduced by up to 33%. For many steelmakers, the average profit margin on steel produced is less than $70 /t making the CCS solution prohibitive for most producers at current cost levels, even if geologically suitable deposits were available. Overall, the current costs, access to geology and public perception of the risks associated with CCS will delay a fast adoption of the technology.

A detailed overview of low-CO2 steelmaking technologies being trialled in Europe will be covered in more detail in an upcoming insight.

Outlook
The steel industry will play a key role in enabling countries and regions to meet their emissions targets and commitments. Steel produced through the BF-BOF route has a significantly higher CO2 intensity than scrap-based EAF steelmaking, however, the scrap supply globally will remain insufficient to meet crude steel production demand. Therefore, technologies that enable low CO2 steelmaking will be critical for the sustainability of the steel industry.

It is unlikely that there will be a quick transition to technologies that will result in a step change in emissions unless the economic incentive becomes sufficiently high. The first steps for some producers will be to adopt best practice and reduce total reductants rates. For others, such as those in Europe, a major shift in technology will be necessary and this will have implications for all stakeholders in the global steel supply chain.