Whose assets will become stranded by carbon pricing? 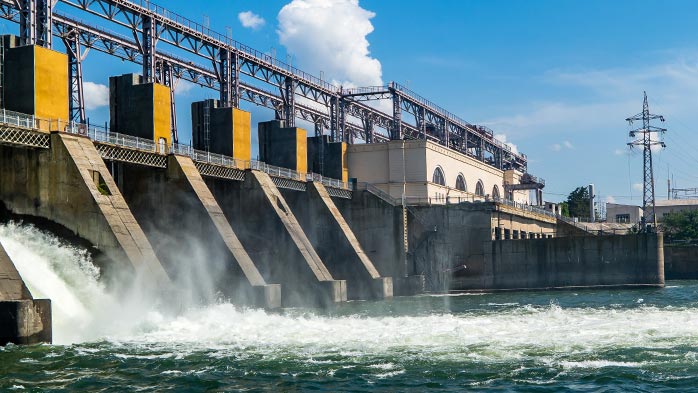 Climate change policy could decisively impact financial returns in the metals and mining sector. However, risks to both investors and lenders vary widely across the assets and firms in the sector.


This reflects both the carbon intensity of production (impacting policy risk) and existing differences in their competitive positioning (affecting policy resilience). Carbon policies will not only add to production costs, but also tilt and re-sort competitive positioning in the market, redistributing – in some cases fundamentally – risk and reward in the industry. Drawing on CRU’s cutting-edge “carbon stress testing” tools, designed to support the de-risking of capital allocation to the mining and metals sectors, we find extensive risks across both the steel and aluminium sectors, including among many currently highly competitive producers.

A new era of low carbon investment
194 countries have signed up to aggressive action to curb climate change as part of the Paris Agreement. While implementation has lagged to date, the tide now appears to be turning. This will likely result in a fundamental re-pricing of fossil fuels over time. To date, already over 50 national and sub-national governments have implemented positive carbon pricing policies (a further 96 countries explicit reference carbon pricing as a policy option for the delivery of their stated objectives), and their stringency is set to increase.

This will fundamentally change global investment returns. Firms that align their business models to the energy transition have the potential to profit, while those that fail to adapt face existential risks. The magnitude to these structural shifts is becoming increasingly clear. In January, for example, Blackrock – the world’s largest asset manager – announced sweeping changes to its investment approach in light of the climate challenge. Looking to the future, it is also noteworthy that the Bank of England will shortly be overseeing new climate “stress testing” on the portfolios of major banks and insurers.

Pressure growing on metals and mining assets
Climate policies will have potentially decisive impacts on metals, mining and fertilisers producers: in particular, these industries are highly energy intensive, with fossil fuel costs commonly accounting for 30-70% of total production costs. Carbon pricing, a central policy response, is thus likely to increase production costs for a broad span of industrials, including steel, iron ore, copper and aluminium producers. However, the extent of these impacts will vary according to the carbon intensity of the individual assets.

In the case of aluminium producers with access to hydro-based power, for example, a $50/t CO2 global carbon charge implies a cost increase on the order of perhaps $100-150/t (roughly equivalent to 6-9% of the current LME sale price). By contrast, however, the dirtiest smelters reliant on coal-based power could see cost increases of in excess of $800/t. As such, carbon pricing will not only add to production costs (potentially impacting prices), but also tilt and re-sort competitive positioning in the market.

Where are the stranded asset risks?
Understanding the relative cost positioning of different assets under different carbon pricing scenarios is thus a key start point to assessing financial risks in climate constrained world. Importantly, the existing competitive position of an asset does not guarantee its competitiveness when carbon pricing is included. Figure 1 below for example, illustrates the percentile change in the cost position of global aluminium assets under a $50/t CO2 global charge. Notably, it highlights the risk of a shift in competitiveness among a significant part of the aluminium curve. 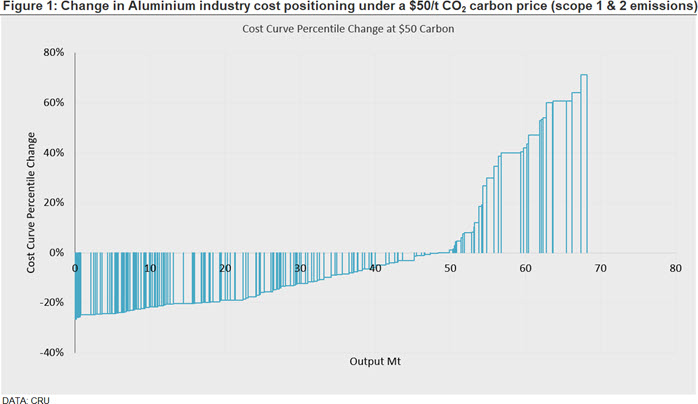 These analytics represent powerful screening tools for identifying stranded asset risks. A further example is shown for scope 1 related emissions in the global steel industry (see Figure 2 below). This research identifies a somewhat surprising balance between risk and resilience, which could remain latent to investors under conventional analysis. In particular, we highlight a cluster of assets in the top left-hand segment which are of particular concern given that they are competitive prior to policy implementation but shift to becoming high cost – and thus subject to material value at risk – under a future carbon price. 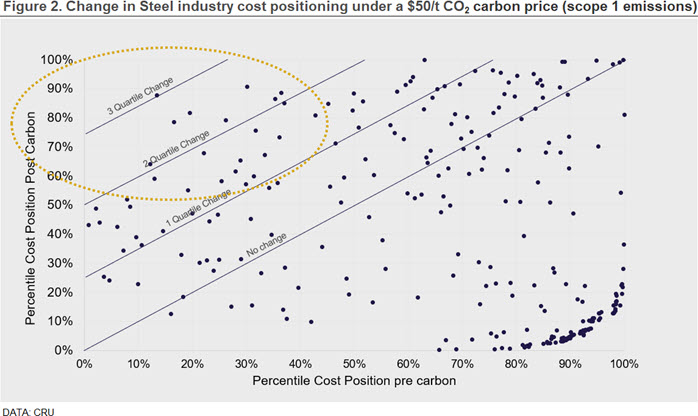 The tools presented are designed to support the effective de-risking of capital allocation to the mining and metals sectors, based on high quality and comparable emissions and production cost data. However, while a valuable entry point, a fuller evaluation of these risks will require consideration of a broader range of factors including, for example: regional carbon price differences and detailed policy rules (including those governing allocation of emissions permits and tax offset), the potential for cost pass through effects within and across value chains, the extend of plant and firm specific value add (including product mix), and the impact of capital investment and technological progress.

Explore this topic with CRU
Want to read more? Register to continue reading and gain access to all CRU Insights
Aluminium Steel
Top