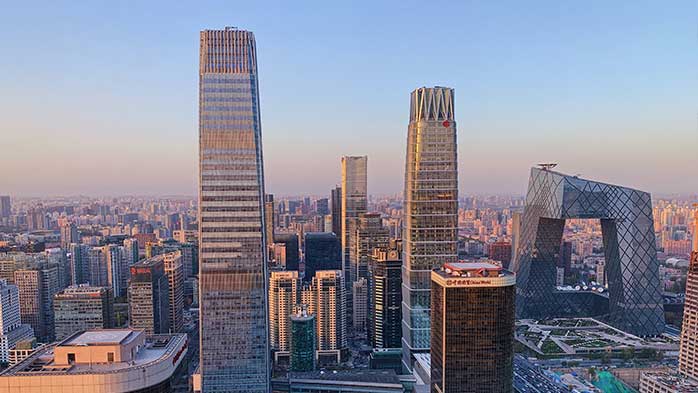 
The emphasis was on high-quality economic development, enabled through ambitious levels of R&D spending and digitisation. Environmental targets for the next five years are very similar to those in the 13th FYP, leaving many unimpressed. We expect additional environmental targets to be announced ahead of COP26. The direction of policy in the latest FYP was not surprising, but the additional detail given will impact commodity markets, creating winners and losers.

Many of the major themes in the 14th FYP, such as Dual Circulation (CRU subscribers only), innovation and green China have been flagged-up in policy statements over recent months. There were no major surprises regarding policy direction during the week of National People’s Congress, although more detailed plans were revealed in some areas.

The 14th FYP set 20 targets in five categories: economic development, innovation, livelihood, environment, and energy security (Table 1). Here we focus more on innovation and the environment, where China’s plan is likely to have the most profound impact on commodity markets. 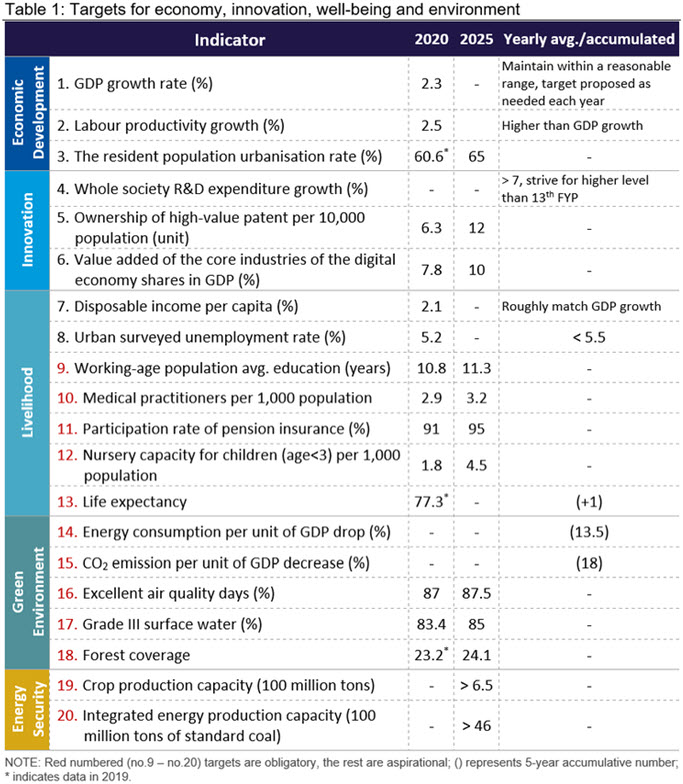 Innovation gets the biggest boost

Pursuing innovation driven development and accelerating modernisation of industry is a key focus of the 14th FYP. These drive productivity growth and are an important enabler of the economic transition to an ‘advanced country’ – one of China’s most important long-term goals. In the 13th FYP, China marginally missed its target for R&D spending of 2.5% of GDP (the outturn was 2.4%).

Innovation is seen as a major building block of China’s ‘Dual Circulation’ strategy. The US-China ‘trade war’, supply-chain disruptions and geopolitical-strategic rivalries have encouraged China to focus more on the development of its own so-called ‘indigenous technology’.

To address the above, in the 14th FYP, R&D spending has targeted increases of >7% per annum between 2021 and 2025. This pace of increase is higher than our forecast for GDP growth (of 5.5% - see Figure 1). That implies R&D spending will likely rise as a share of GDP.

Extra resources will be dedicated to scientific frontier areas including artificial intelligence and semi-conductors. There are also plans to increase value-added in the digital economy to 10% of GDP by 2025 from 7.8% in 2020. Clearly, these areas are less commodity intensive, which may not be good news for traditional bulk commodities like steel and its raw materials such as iron ore and metallurgical coal.

Progress of industrial modernisation to accelerate

To compete with the manufacturing sector in developed markets, China plans to speed up the modernisation of its industrial system. It aims to upgrade manufacturing capabilities by 2025 in eight priority areas (Table 2). Developments in several of these industrial sectors will boost the demand for minor metals, rare earths, nickel and cobalt, and high value speciality steel and aluminium products. 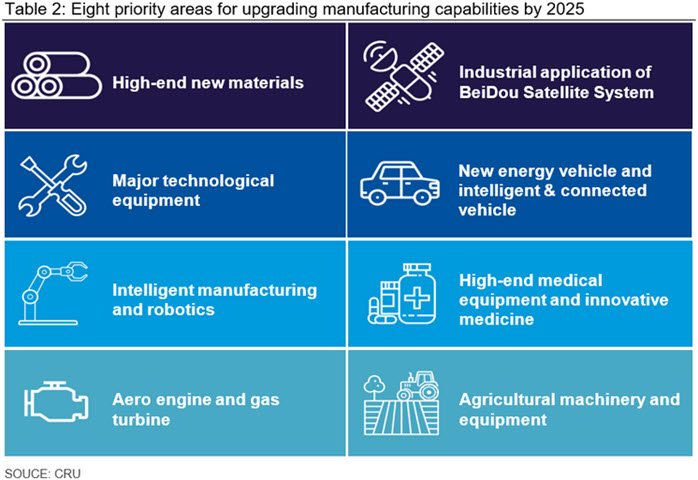 Another key impact on commodity demand will be associated infrastructure spending. It will focus on supporting innovation with ‘new infrastructure’ projects such as 5G, UHV projects and EV charging stations. That will drive up the demand for optical fibre, aluminium cable, and copper wire. However, ferrous bulks will potentially see growth prospects reducing in next five years. Although there are indicators in the 14th FYP, such as for growth in roads, railways, ports, and airports, the targeted increases are lower than those in the 12th and 13th FYPs.

The environmental targets in the 14th FYP are unambitious. They have come as a surprise to some after President Xi’s pledge of carbon neutrality last September. For example, the target of 18% reduction in carbon intensity per unit of GDP is the same as it was in the 13th FYP (also 18%). Likewise, the target for reduction in energy consumption per unit of GDP has been lowered to 13.5%, from 15% from the 13th FYP. Targets and timing for achieving peak carbon were not mentioned in the 14th FYP. 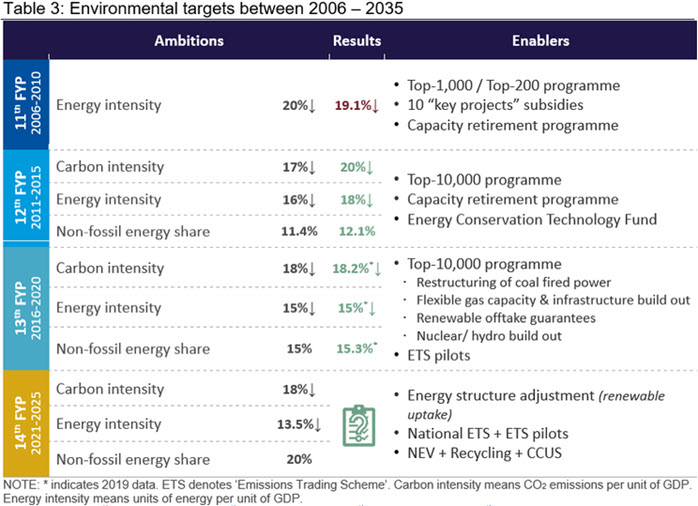 The share of non-fossil fuel in primary energy is to rise from 15% to 20% by 2025, including nuclear power. But overall, there may still be room for coal-fired power to grow. At the same time, rises in solar and wind power generation will have an impact on metal demand, e.g. solar power requires silicon while wind power will consume copper.

China overachieved on those environmental targets in the 13th FYP. That is likely to happen again in the 14th FYP, since all environmental targets are regarded as obligatory. There have been many ambitious government statements about its policy intensions on the environment. For example, a ‘New Steel Policy’ document aims to double the share of domestic steel production produced from scrap steel, which is more environmentally friendly. Moreover, in the ‘New Energy Vehicle Industry Plan’, new energy vehicle sales are set to reach 20% of all vehicle sales by 2025. The foregoing plans will shape commodity demand in these respective industries.

Announcements made during the “Two Sessions” suggest more environmental targets are likely to come in the near future, including potential caps on total energy consumption. The government is assessing the role of each industry in its green development strategy and there is much more work to be done on these details. Emission trading, that started nationwide in February 2021, has been earmarked as one important policy tool to achieve emission targets. It is likely to accelerate the progress in this area. More announcements of environmental targets are also likely to be linked to China’s negotiations preceding COP26 in Glasgow in November 2021, which will impact all carbon intensive industries.

Clearly, this does not mean that China will neglect economic growth. China broadly achieved its previous long-term target of doubling GDP by 2020 in comparison with its 2010 level. It is now focused on doubling GDP again by 2035 and becoming “a modern socialist country by 2049”, which marks the 100th anniversary of Communist rule. To deliver this doubling of GDP will require growth to average at 4.7% p.a. over the next 15 years – a slower pace than in the previous 10 years. Against this background, this FYP marks a period of change towards the next phase of China’s development and thereby, hopefully, avoiding the middle-income trap.

The modest economic growth target for 2021 and the lack of a specific target for five-year growth do ease the pressure of volume driven growth. This avoids bad economic decisions, which were likely to be made to boost growth for its own sake. Furthermore, clear targets have been set for the components of GDP, including consumption. It suggests the importance of the make-up of growth, productivity, is more important than total growth.

Another important category of the FYP is well-being, including a range of human development indicators (Table 1) that are important to society and social stability. To boost domestic consumption, which is one of the major objectives of “Dual Circulation”, China needs to boost household incomes and promote a fairer distribution of wealth. At the same time, to raise the urbanisation level from 60% to 65%, China will further relax household registration rules (i.e. Hukou system) outside of Tier 1 cities, providing migrants with more access to urban services and housing.

In conclusion, the major themes of the 14th FYP, such as ‘Dual Circulation’, innovation and environment have been flagged in advance, so there are no big surprises. However, the FYP targets provide additional detail that help us better understand the potential growth trends for different commodities and metals.

The focus of the 14th FYP is on high-quality growth, achieved through innovation and environmental targets. These targets will alter the structure of the economy and give rise to commodity market winners and losers. For example, the upgrading of manufacturing capabilities in eight priority industries and ‘new infrastructure’ will benefit some minor, special steel and base metals. While commodity intensive traditional infrastructure spending will continue, the cumulative additions are lower than in the previous two FYPs and will negatively impact on ferrous bulks demand.

Environmental targets do not explicitly plan for carbon peak before 2025, which some market commentators had speculated might happen. We expect more details on industry production targets, emissions trading schemes and long-term carbon targets are likely to be announced. Expect these as the year progresses and just in time for the UN climate convention COP26.