However, this is the lowest y/y GDP growth rate since Q3 2020, reflecting the growing pressure on the world’s second-largest economy. The ongoing energy crisis, the property slump, and surging raw material costs have weighed on the recovery of the economy in the third quarter.

China’s economy grew by 4.9% y/y in 2021 Q3, down from 7.9% growth in Q2. This was slightly below expectations of 5% in the median survey of Bloomberg analysts, however, better than CRU’s forecast of 4%. China has set an economic growth target of “above 6%” for 2021. We still expect growth to easily surpass that target, growing by around 8% this year despite the current pressures.

Growth in net exports and consumption were remarkably strong in 2021 H1 due to a post-pandemic rebound. Q3 has seen slowing growth in investment and consumption amid the power crisis, sporadic Delta outbreaks, and a regulatory campaign to deleverage the property sector (CRU subscribers only) (See Figure 1).

Fixed asset investment (FAI) – a gauge of expenditure on items including infrastructure, property, machinery and equipment – in September contracted by 3.2% y/y, down from a 0.4% fall in August to post a growth of 7.3% y/y in the first nine months of 2021. Although the power crunch in September hobbled the industrial production, the Chinese authorities announced several measures to enhance the investment in utility and mining sectors to ensure a smoother operation of electricity supply (top of Figure 2).

While the main reason for power crunch was due to the shortage of thermal coal and strong external demand during the post-Covid recovery this year, NDRC’s warnings to urge local government to meet the ‘Dual Control policy’ were the straw that broke the camel’s back (bottom left of Figure 2). We think the power rationing problem will be largely eased as the central government has signalled it wants to ensure a reliable supply of power. However, the liberalisation of electricity prices will still weigh on energy-intensive sectors, such as steel and cement (bottom right of Figure 2). 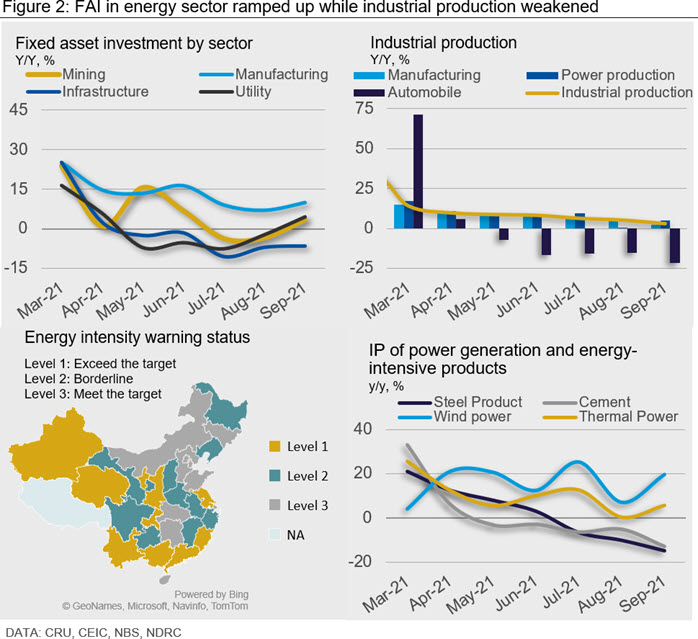 China’s PPI inflation rose more quickly than expected in September, driven by soaring raw material prices and piling pressure on businesses, already grappling with energy curbs and supply bottlenecks. These have all led to elevated PPI inflation (Figure 3). Looking ahead, we do not think the current surging thermal coal prices are sustainable as the government has signaled to intervene the thermal coal market. CPI inflation has remained subdued.

The real estate sector continues to see a contraction in activity. Developers had accumulated funds in the 2021 H1 by taking advantage of strong sales growth and running up accounts payable with suppliers. However, these channels of financing are tightening up as sales momentum weakens and a regulatory crackdown on abuses of contractors take effect (top of Figure 4). The real estate sector continued its downturn, as sales of properties fell by 13.2% y/y in September in floor space terms, although this was a smaller fall than in the previous month. Faltering sales and tightening financial constraints are forcing property developers to scale back land purchase and new starts. Floor space starts of properties contracted for the sixth consecutive month, falling by 13.5% y/y in September. Floor space completions of properties dipped to 1% y/y in September, suggesting that developers have now exhausted the cashflow benefits of accelerating project completions (Bottom of Figure 4). 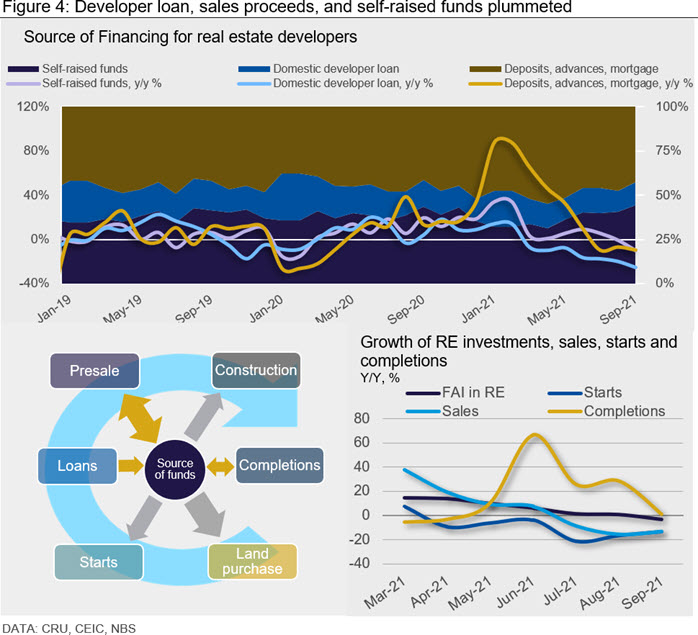 The supply constraints and power crunch weighing down growth will likely ease in Q4. However, high power costs and developer’s financing drought will keep dragging on both China’s property and energy-intensive sectors. We expect the growth will continue to slow in Q4 to around 3%. Meanwhile, there are signs of easing from Chinese policymakers as PBoC recently noted that financial institutions have excessively limited their lending to developers. PBoC also urged banks to help local government stabilise the rapidly cooling housing market and ease mortgages for homebuyers, suggesting that some marginal easing could be coming up.