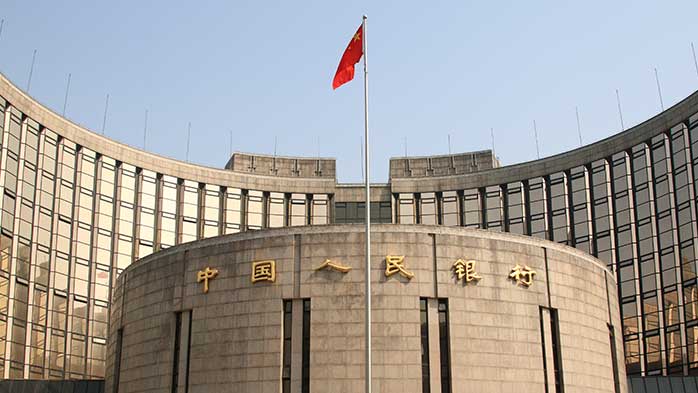 Starting 4 March China will announce its stance on future policy. A closely watched event, given China is the largest consumer of commodities.


Conscious of its high and rising debt levels, China is expected to reduce fiscal stimulus and gradually rein in credit growth. The 2021 fiscal stimulus is likely to be in the range of RMB1.3~2.5 trillion: no growth target expected for 2021; no rise in the quota for local government special bonds; and the temporary tax and fee reductions introduced last year are expected to be extended to 2021.

From 4 March, China holds its annual political meetings – the ‘Two Sessions’. It refers to two important meetings: firstly, the National People’s Congress (NPC) and, secondly, the Chinese People’s Political Consultative Conference (CPPCC). These two meetings set the direction of future policies. We expect to hear about the stance of fiscal and monetary policy in 2021, which will directly affect commodity demand.

China is a centrally planned economy. 2021 is a special year as it marks the first year of its 14th Five Year Plan (FYP). On 1 July 2021 China will also mark its first centenary under communist party rule. As such we expect this year’s announcements to reflect the long-term vision for China’s economic development – to become the world’s largest economy and achieve carbon neutrality by 2060. 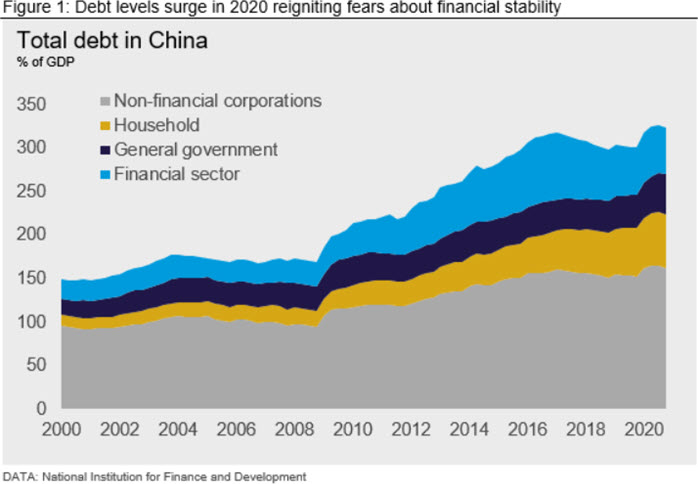 Two themes are likely to be central to this year’s annual meetings.

First a recognition that Covid-19 has pushed up on already high levels of debt. Total debt as share of GDP in China rose by 20 percentage points to 323% in 2020. It has ignited renewed fears about financial risks, and the associated threats to economic growth. Household debt rose by 18% in 2020, fuelled by cheaper and easier access to credit. Both mortgage and unsecured debt levels have risen. Government debt has also increased significantly, due to Covid-19 stimulus. The authorities are keen to lower debt levels by reigning in fiscal and monetary support.

A return to our narrative of a ‘managed slowdown’ in China

Second, we expect a return of emphasis on the quality (not quantity) of economic growth.

Prior to Covid-19, our narrative for China was a ‘managed slowdown’. Put simply this means the use of policy to manage a gradual slowdown in economic growth. Growing too fast could easily expose the economy to financial risk and damage the environment. Growing too slow could leave the country stuck in the middle-income trap. It is a balancing act.

Covid-19 meant the government had to change tack. To address the fall in GDP growth, the government had to step-up policy support. With growth in China now back to pre-Covid-19 levels, the authorities feel able to re-focus on slower but high-quality growth. Carbon neutrality by 2060 is a key part of delivering on the environmental policies.

Growth in China will slow in coming years, but will not stop its rise to the top

Prior to 2020, it was common for China to announce annual GDP growth targets. But there was no growth target last year, and we do not expect a growth target this year either. In our forecast we project growth in 2021 to be ~8%. The high rate is partly the result of the low level to which growth fell to in 2020. Over the next five years, we expect GDP growth to slow to an average rate of 5.5% per year. This is lower than the 6.7% growth rate over the previous five years (i.e. 2015 – 2019).

Xi Jinping has pledged to double Chinese nominal GDP between 2020 and 2035. This will be delivered by China’s “Dual Circulation” strategy: greater innovation to boost productivity; and rebalancing growth away from investment and towards domestic consumption. According to our forecasts, Xi’s pledge will be met. China will become the largest economy in the world around 2030.

In 2020 China announced a big fiscal stimulus package of RMB6.1 trillion. A large part of that stimulus came in the form of special Covid-19 bonds and higher quotas for local government special bonds (LGSB). These bonds were used to raise funds, much of which were used to fund infrastructure and other projects. This spending has supported metals demand in 2020. 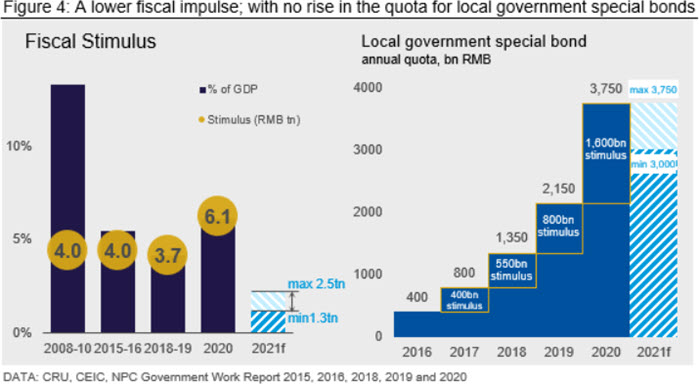 The robust economic rebound in China means there is less need for stimulus through LGSB quota increases in 2021. Moreover, there is a concern that local authorities are struggling to identify high return and high-quality infrastructure projects. Following the large-scale stimulus unleashed after the Global Financial Crisis, the government is more aware of the problems of capital misallocation and building so called ‘bridges to nowhere’ and ‘ghost towns’.

Together with the concern about high debt levels, we expect the LGSB quota for 2021 to either stay the same as last year, at RMB3.75 trillion (Figure 4), or it could even be lowered to RMB3 trillion. This means that local governments will still accumulate debt – but the ‘fiscal impulse’ from LGSBs will be zero or negative. The fiscal impulse measures the change in the fiscal deficit, as a measure of how fiscal policy contributes (or detracts) from growth. A reduction in these quotas would not be good news for metals demand.

China has a variety of tools that it uses to control the availability of credit. During 2020 interest rates did not fall by much – the loan prime rate (LPR) fell from 4.15% to 3.85%. However, credit availability increased significantly. That allowed total social financing to rise from 10.7% in 2019 to 13.3% in 2020, which has pushed up on household debt levels.

Since the beginning of 2021, the People’s Bank of China (PBC) have signalled their intent to shift gears to ‘normalisation’ of monetary policy. The key measure of this will not be what happens to particular policy instruments – it will be gradually lowering money supply and credit growth such that it grows broadly in line with nominal GDP. 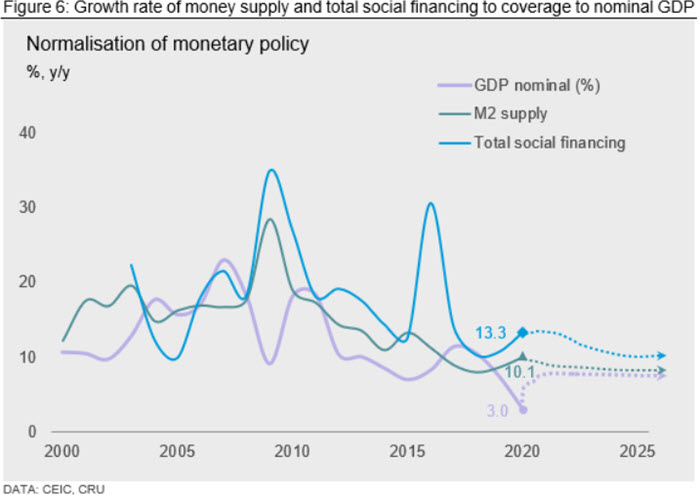 This message on normalisation has been reiterated by central bank officials in a variety of public forums. They have stressed that change is coming, but gradually and incrementally. The PBC has demonstrated its finesse in its reduction of liquidity conditions before and after the Chinese New Year. In so doing it succeeded in communicating its intentions to the market. This does not mean that there will be no monetary stimulus from this point onwards. Instead, the message is that targeted support is still necessary to struggling sectors of the economy, but the need for support will be balanced against the need to normalise credit and money growth.

Stimulus continues but at a much-reduced rate

China was first into the Covid-19 crisis and first out. In response the authorities doubled the stimulus it would have otherwise provided in 2020. Last year’s stimulus seems to have helped bring the overall economy back to its pre-Covid-19 path. That success means that China can substantially lower the level of stimulus that it offers in 2021. This is not going to bode well for metal end use sectors.