On 11 October 2021, the European Commission made an announcement on suspending the anti-dumping tariffs on certain Chinese rolled products into the European Union. So, what does it mean for the industry?


In recent years there has been a growing number of trade actions from countries globally against various aluminium related products. In the past year or so the European Commission had come to the fore in this regard with anti-dumping tariffs on Chinese extrusions, rolled products as well as some foil products. In the case of rolled products, the preliminary duties were enacted from 12 April this year. However, and as we have described in our last two Aluminium Product Monitors, there has been a move to suspend these measures due to healthy demand, improved profitability, and long lead times. The accompanying charts show that Chinese imports have lost market share post Covid-19 as they remain subdued while demand has recovered for European producers.

We understand that some automotive suppliers and some distributors have been at the forefront of this move. The EC is now planning to suspend these duties for 9 months. The EC is also highlighting that they would monitor very closely the imports and could reintroduce the duty at short notice. 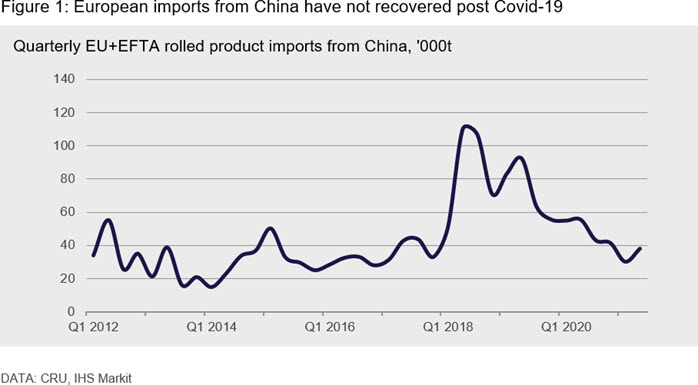 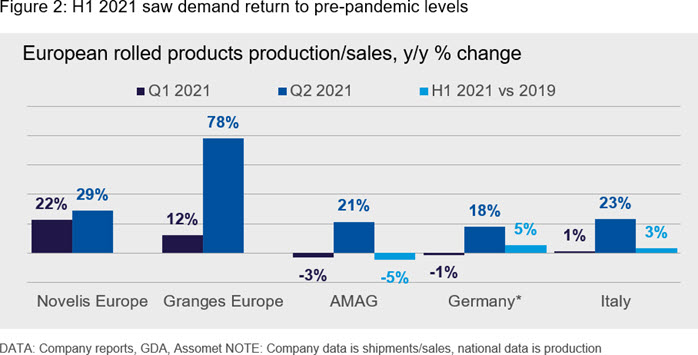 In an announcement issued on 10 September, European Aluminium (EA) voiced serious concern about the EU’s proposal to suspend anti-dumping tariffs on Chinese rolled products for 9 months. The EA’s Director General, Gerd Götz, indicated that the move was contradictory to their stated ambition to protect local producers from unfair trade practices. “Tens of thousands of EU jobs and hundreds of millions of euros in decarbonisation and recycling investments are on the line.”

The statement also highlighted that this move “endangered the EU’s climate ambitions” by supporting imports of higher carbon products. The association estimates that Chinese rolled products have a footprint of approximately 20 t CO2 /t Al versus an average of 7 t CO2 /t Al for its European producers. Götz said, “We request the Commission not to suspend the definitive measures due for October 2021 and offer our support for an urgently needed in-depth and balanced investigation.”

What could be the consequence of the suspension?

In our opinion, there are three plausible consequences of the suspension for the rolling sector that would normally prevail. First, is higher Chinese imports than would otherwise take place with a consequent loss of orders for some other mills. Second, conversion fees will be lower than would otherwise have occurred. Naturally both these two points are likely to be a blow to roller profitability but potentially beneficial, in the short term at least, to consumers. Third, it may cause rolling companies to suspend/stop plans for expansion. Arguably, this would run counter to the long-run aims of the duties as it would postpone capacity in the region readjusting to the new market environment.

However, shortages of power and alloying materials will limit Chinese rolled products exports. Chinese exporters also need to navigate a very tight global freight market and pass through very high container rates to European buyers. These factors mean Chinese exports are unlikely to rise meaningfully even with the duty suspension.

We think this uncertainty is harming decision making for investments in both foil mills and in rolled products. Most major investment plans need many years in order to get the appropriate payback on the investment and even the five years which the duties are initially scheduled for does not fully cover this period. More broadly, it also raises doubts as to whether this suspension would be reintroduced at a later point and it may even spark concern amongst extruders who are currently looking to expand as to whether something similar would occur in that sector.

Demand and profitability for the European rolling sector has improved since the original study and lead times are very extended. In fact, we think that a suspension of the duties is not likely to cause a return to lead times or conversion fees that prevailed a year or two ago. This is partly because we think Chinese imports will not return to the peaks of 2018 and 2019, due to concerns that the EC may end the suspension quickly, and that any increase in imports will be relatively shortlived. In addition, the recent power shortages and lack of alloying agents is already leading to substantial cuts in semis production in China. As a result, a recovery in exports to Europe is likely to be limited at best and it is plausible that imports may not even be able to be sustained at current levels. However, the current uncertainty may hinder the recent strong upward trajectory in conversion fees and at least slow investment plans for additional capacity. We explore in more detail whether this has halted the upward trajectory in conversion fees in our latest edition of our Aluminium Products Monitor (CRU Subscribers only).