Over the past quarter we have seen two significant announcements in relation to the production of primary aluminium utilising an inert anode.


While the underlying metrics and costs of the developments are not fully visible, what is clear to see is the continued promotion and investment into low-carbon aluminium and the focus by a number of companies on the use of inert anodes coupled with renewable energy powered smelters. The current driving force is in Europe and North America, but we may start to hear more from China over time.

Direct combustion and fugitive emissions at aluminium smelters were estimated at 1.96 t CO2e per tonne of aluminium produced on average worldwide in 2020. This represents a marginal decrease from the previous year, with an average of 1.98 t CO2e/t Al in 2019. World average direct emissions have been decreasing over the past years due to improvements in smelting technology and, to a larger extend, closures of older, more polluting smelters. The average in 2010 was estimated at 2.58 t CO2e/t Al. 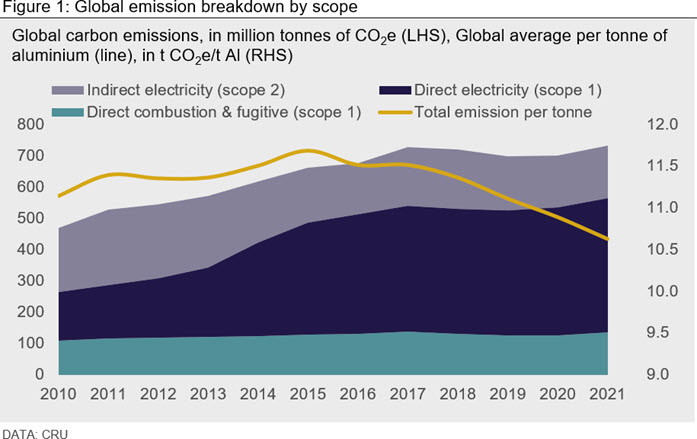 First, UC Rusal announced in April that it is producing +99% pure aluminium with a carbon emission of less than 0.01 metric tonne per tonne of metal. The claim was achieved at Rusal’s Krasnoyarsk smelter. Rusal is currently producing approximately 1 metric tonne per day at 140kA at the plant.

Rusal state that “using inert anodes provides for replacing classic carbon anodes with inert non-consumable materials — ceramics or alloys. This not only completely eliminates emissions of greenhouse gases (CO and CO2), polyaromatic hydrocarbons, benz(a)pyrene and sulphur from the reduction process, but also significantly reduces the cost of production by saving anodes.”

Second, ELYSIS announced that they had selected the Alma smelter as the first installation site for its inert anode technology. The smelter is operated by Rio Tinto in Quebec and the reduction cell will be commercial sized at 450kA. The site is located near to the research and development centre where the initial technology has been worked upon.

ELYSIS CEO, Vincent Christ said “Our team is thrilled to be taking a significant step forward in the development of technology that will position ELYSIS as a leader of tomorrow’s aluminium industry technology. We would like to thank our provincial government for their support in our breakthrough technology. We look forward to using the new 450 kA inert anode cells to demonstrate to the industry that decarbonising aluminium production while improving its competitiveness is not just a mere dream.”

One of the core statements is that ELYSIS will reduce operating costs and increase production capacity. ELYSIS is a joint venture company, led by Alcoa and Rio Tinto, that is working to commercialise a new technology to make aluminium that eliminates all direct greenhouse gases (GHGs) from the traditional smelting process and instead produces oxygen. Alcoa's Technical Centre supports ELYSIS in the manufacture of proprietary materials for the new anodes and cathodes that are essential to the ELYSIS process. The Rio Tinto technology team in France is creating commercial scale designs for the ELYSIS technology.

Regions with the highest energy consumption, such as the CIS, the US and Central & South America, include smelters using older, less efficient, Soderberg technology. However, a significant amount of Soderberg capacity has been curtailed over recent years. Closures include Rusal’s Volgograd and Bogoslovsk smelters, as well as the Soderberg potlines at the Nadvoitsy smelter, while the Ouro Preto and Pocos de Caldas smelters in Brazil have also been fully curtailed. In the US, the Massena East smelter was curtailed in 2014. The Soderberg potline at Seydisehir has been shut and production is now done with pre-bake technology.

More recently, Alcoa announced the closure of two of its three Spanish smelters, located in La Coruna and Aviles, which were both using Soderberg technology. Its third smelter in San Ciprian, that uses Prebake technology, is maintaining operations. The smelter with the highest power consumption worldwide is believed to be the Canadian Arvida smelter, with a consumption of 17.6 MWh/t.

Europe is the first mover worldwide, though Chinese mills have recently pressed ahead with low-CO2 steelmaking. EU policies (e.g. ETS¹) are the driver of Europe’s transformation and are a major source for uncertainty. Europe’s steel industry has a history of strong R&D, which is being utilised for the transformation. While Asian countries could transform their steel industry, no immediate plans have been announced outside China. The main option for upstream steel industry to reduce emissions is to accelerate the switch from BF/BOF to EAF (ensuring carbon neutral power supply and input material), but this is mostly expected beyond 2025. 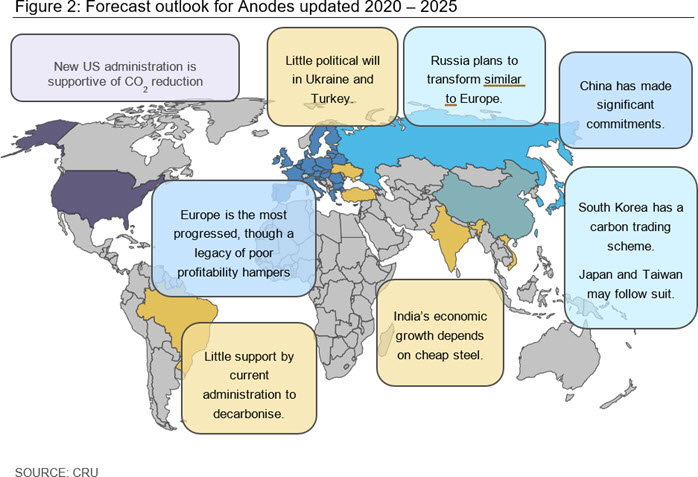 Accelerating the journey towards net zero

CRU is leading the way in quality, verifiable emissions data. Producing a monthly GHG emissions dashboard for the aluminium and steel sectors, the study is part of CRU's global and extensive analysis on smelting costs, with a continued focus on electricity costs and the impact of carbon pricing initiatives. Data is taken from CRU's Cost Models, where each plant's costs and emissions are modelled individually, on an annual basis.

Access online GHG emissions data in the subscriber portal at emissionsanalysistool.crugroup.com. Not a subscriber? Request more information or schedule an analyst-led demo to find the tools and resources you need to drive results. Speak to our team today >

For enquiries about the insight or general information, please get in touch below.