Within the fertilizer industry, nitrogen is the most exposed of the sectors to disruption from green policy developments. CRU has leveraged its bespoke cost models to measure CO2 emissions from all the assets covered across this carbon intensive industry. This Insight highlights our approach, along with some of the challenges the industry faces as it looks to move to a lower carbon future.

The focus on emissions is set to intensify

Sustainability and the environment have become key topics for energy intensive industries as the world grapples with the challenges of climate change, economic growth, and expanding populations. Industrial sectors are facing greater scrutiny from governments, financial stakeholders, and end users about Environmental, Social and Governance (ESG) benchmarks. The focus on the environment is particularly important to the nitrogen fertilizer industry, due to its intensive use hydrocarbon feedstocks and its associated emissions. CRU has leveraged its bespoke nitrogen cost model to estimate CO2 emissions associated with nitrogen production on a plant-by-plant basis.

What does CRU examine when looking at nitrogen emissions?

The emission estimates generated by CRU models are focused on the CO2 emitted as part of the nitrogen fertilizer production process. The estimates align with the Greenhouse Gas Protocol scope 1 and scope 2 definitions. The estimates do not account for the CO2 released as part of the hydrocarbon extraction process, the production of various consumables at the plant, and any emissions that occur after the product has left the premises. 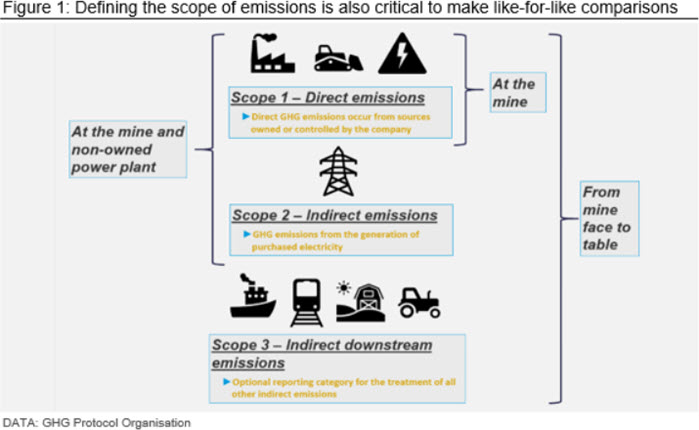 Heavier hydrocarbon feedstock, especially coal, is primarily used in China. As a result, the Chinese industry is more CO2 intensive than the rest of the world, drastically steepening the emissions curve. Chinese nitrogen producers face a monumental challenge as the government looks cut CO2 emissions by 2060. The most polluting 30Mt of ammonia production, mostly in China, emits 38% of total industry CO2 emissions.

The nitrogen industry is carbon intensive, but not the largest emitter of CO2. Steel, cement, and power generation all emit more than the nitrogen industry, which is responsible for approximately 1% of global CO2 emissions. CRU has been intensively covering the progress the steel industry is making to decarbonise, and the fertilizer industry is starting to follow suit. The emissions curve below shows the similarities and differences between the nitrogen and steel industries. 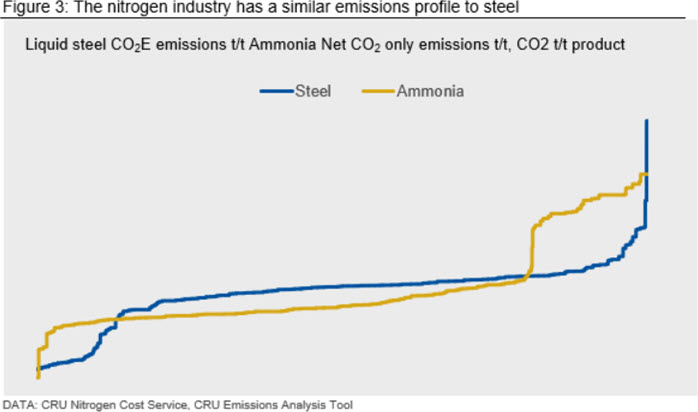 Governments around the world are developing decarbonisation strategies – this will have profound implications for the nitrogen industry. As the industry transitions to becoming more carbon conscious, powerful and robust data is needed. Measuring, benchmarking and valuing carbon dioxide and its impact on production costs will become increasingly important.

This will be particularly important in Europe. The European Union has been one of the front runners in this area, introducing the Emissions Trading Scheme (ETS) in 2005, taxing CO2 and N2O emissions. The EU is continuing to expand the scope and dynamics of its ETS, impacting not only European producers but also foreign product entering the EU. The EU ETS is the largest, but not the only ETS system. Mexico, Colombia, Kazakhstan, South Africa, Chile and New Zealand have existing trading schemes. China and Canada are actively investigating and developing policy to introduce similar schemes. As more countries rollout ETS systems or other taxes, global nitrogen producers will need to understand CO2 emission profiles of plants to fully appreciate relative cost and competitive positions.

As carbon becomes more expensive, green ammonia and carbon capture/storage is likely to play an increasing role in the industry. Understanding the impact carbon emissions could have on the nitrogen industry will be key in both medium term and long-term planning, and CRU has the tools and data to help this process.

The emissions data cited in this insight is available in the recently updated Nitrogen Cost Service. It will also be included in CRU’s Emissions Analysis Tool in the middle of 2021.