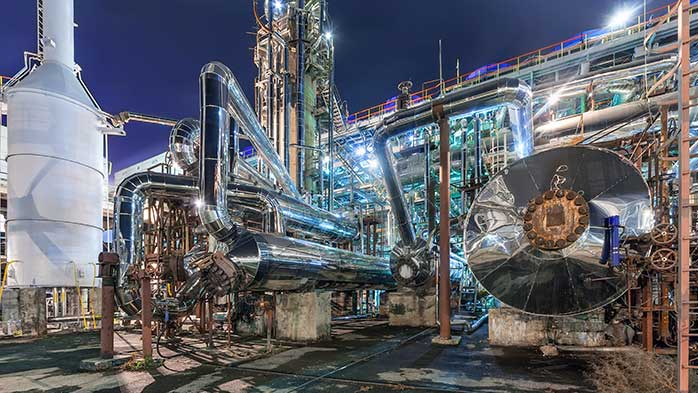 Producers, traders, shippers, and consumers of commodities are facing heightened scrutiny to meet ambitious emissions and decarbonisation targets set by governments around the world.

The number of projects and memorandum of understandings for the production and consumption of green ammonia has quickly gathered pace, with an astonishing amount of activity over the last 12 months alone. This provides backing to the idea that green ammonia will be hugely significant in the decarbonisation of a range of different industries. There is significant demand upside for green ammonia in what are currently unconventional uses, such as bunkering and use as a hydrogen carrier. This insight explores developments among established nitrogen producers, major projects, and the bottlenecks for expansion. Previous CRU subscriber insights have explored the carbon intensity of the ammonia market and the difference in production methodologies for green ammonia vs blue and grey ammonia.

Shareholder pressure and government scrutiny is pushing companies towards a greener future. The early adopters and movers towards decarbonisation targets are large, publicly listed fertilizer companies in Europe and the US. Some companies have performed an apparent U-turn on the validity and outlook of green ammonia.

One of the producers at the forefront of nitrogen industry’s green revolution is Yara. The Yara Clean Ammonia business unit was created in 2021 to promote low-carbon fertilizers and exploit business potential for other applications. Yara is currently involved in three green ammonia projects, two at existing production sites in Europe and one at its Pilbara plant in Australia. These initial projects all have a capacity of <100 kt/y. Eventually, Yara intends to fully electrify production at its 500 kt/y Porsgrunn plant in Norway, however the company has stated that public funding will be required for the full conversion to occur.

CF announced a pilot green ammonia plant at its existing Donaldsonville facility in 2020 and signed an EPC contract with Thyssenkrupp in April 2021 to construct a 20 MW electrolyser. OCI is exploring a pilot green ammonia project in Egypt and is investigating the strong potential for ammonia and methanol usage in the shipping industry. The initial phase of OCI’s decarbonisation plan is more focussed on blue ammonia. The Beaumont facility in the US is expected to use low-carbon hydrogen as a feedstock from 2021 H2, while the Fertiglobe JV has entered a partnership with TA’ZIZ to produce blue ammonia at its operations in Ruwais, UAE.

A throng of green ammonia projects have been announced around the world over the past year. These projects are mainly located in regions with the most advanced decarbonisation policies, or in countries with considerable potential for renewable energy generation. 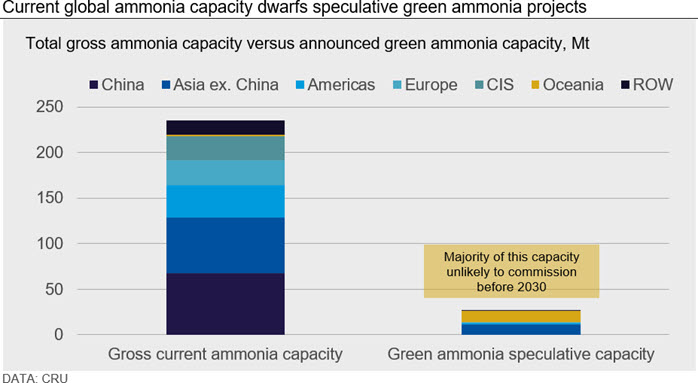 The largest projects in terms of annual capacity include the Helios Project in Saudi Arabia, the Oman Green Energy Hub, the Asia Renewable Hub in Western Australia and the HyEx project in Chile. The Oman Green Energy Hub and the Asia Renewable Hub are the largest projects yet announced. Both sites are expected to use approximately 25 GW of renewable energy and when fully constructed could have the capability of exporting up 10 Mt/y of green ammonia. There are considerable milestones that need to be achieved, including the ~$40 billion CAPEX for each project. Regulatory checks on the construction of renewable energy are further bottlenecks to projects realisation, with the Asia Renewable Hub already facing uncertainty due to its impact on protected habitats.

The Helios project in Saudi Arabia involves Air Products, ACWA Power, and NEOM and the 4 GW plant has an estimated CAPEX of $5 bn. The HyEx project is part of an initiative between Engie and Enaex, who are considering a 1 GW solar farm that will produce 124 kt of hydrogen to feed a 700 kt/y green ammonia plant. Other large-scale projects in the early stages of development include two in Bell Bay, Australia (utilising hydro power), with feasibility studies on both expected to be completed this year.

Despite the excitement and number of projects announced in recent months, there are still sizeable hurdles to overcome. A large majority of projects in their early stages have low capacity (<100 kt/y) in comparison to major conventional ammonia projects. There is also considerable uncertainty over green ammonia demand projections over both the medium- and long-term.
The introduction of new technologies is expected to improve the overall efficiency and lower the cost of production, the majority of which is taken up by the cost of renewable electricity. Producing feedstock hydrogen using conventional methods of steam reforming of fossil fuels ranges between $1-2 /kgH2 without any form of carbon capture and storage, compared to the $5-6 /kgH2 cost for hydrogen via electrolysis. Political and market levers such as emissions trading schemes and the EU’s CBAM are likely to be key in determining the rate at which green ammonia capacity grows. Government incentive programmes, such as the ‘hydrogen shot’ initiative recently announced by the US Department of Energy, will also be critical to bringing costs down.

Taxes or related additional costs for less environmentally friendly methods of production are not the only incentives that are required for green ammonia to take off on an industrial scale. Although renewable energy costs have more than halved in the past decade, a significant amount of investment is required to produce green ammonia, not including the construction of the ammonia synthesis line itself.

Furthermore, expansion in renewable energy generation is also required to power growth in electrolyser capacity. Current estimates for installing solar capacity are wide-ranging but are in the region of $600-1,500 /kw. Onshore wind is slightly more expensive, while offshore wind is approximately four times more expensive than solar. This means that a 1 GW electrolyser with associated renewable energy to produce ~800 kt/y of green ammonia would cost in excess of $2.5 bn initial CAPEX, just to provide hydrogen feedstock. This is far higher when compared to a large-scale grey ammonia project such as Ma’aden’s third 1.1 Mt/y plant, due to commission in 2022. The CAPEX of Ma’aden’s expansion is approximately $1 bn, including the necessary feedstock infrastructure and construction of the ammonia synthesis line.

The vast amount of investment required means that nitrogen producers are seeking public funding or other incentives to encourage CAPEX programmes on green ammonia. Producers cannot bank on incentives at the end of the supply chain, given the unknowns on green premiums. In the fertilizer industry, farmers are currently unlikely to be willing to pay a premium for low-carbon fertilizers over conventional nutrient inputs.

Although the CAPEX requirements provide a major hurdle towards green ammonia capacity growth and overall decarbonisation, the number of projects announced indicate that industrial development is underway. Many of these projects involve players that are not established participants in the nitrogen industry, indicative of the significant demand upside for what are currently unconventional uses of ammonia. Furthermore, the reliance of the industry on the development of new technologies and collaboration between new market players is sure to result in future bottlenecks along the supply chain.

CRU will be investigating the future for green ammonia outside of the agricultural industry in an upcoming insight, with considerations for future end uses including marine fuel, an energy storage solution, or as a carrier for green hydrogen.

Low emissions ammonia offers huge and exciting demand prospects to the nitrogen industry. Despite the hype surrounding green ammonia, the path to economic feasibility will be long and arduous. To better understand the ammonia / nitrogen industry, resources from market outlooks and price forecasts to emissions data and cost tools are available. Learn about these services and how we can help you.