After reaching a new all-time high of more than $230 /dmt in May, iron ore prices held steady in the following months and traded in the $200–220 /dmt range for most of June and July.


However, things have changed dramatically in August and the price has now dropped to $140 /dmt, as assessed by CRU on 24 August. This is in line with our expectations of the iron ore price declining in Q3, although the recent collapse has been steeper than we expected. So, what is driving this recent sharp fall in iron ore prices? 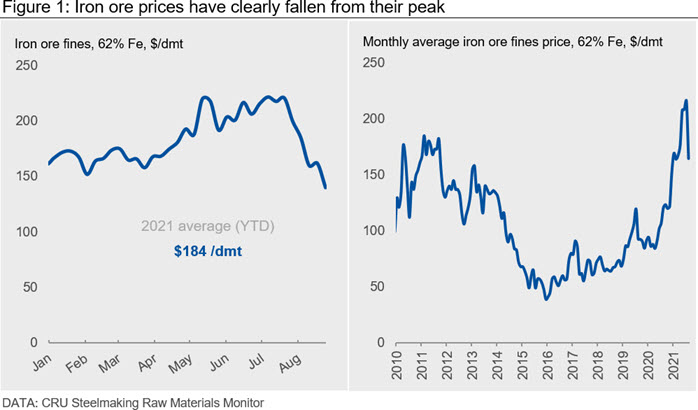 To understand why iron ore prices are falling hard, we turn to the demand side. China accounts for ~75% of seaborne iron ore demand due to the country’s high proportion of steel produced through the BF-BOF route. This accounts for ~90% of the country’s crude steel production, compared with 53% in the rest of the world. In Q2, China’s crude steel output set a new record of 290 Mt, beating the previous record of 280 Mt – which itself was only just set, in 2020 Q4. However, things have turned around quickly in Q3. Production started falling prior to China’s 100th anniversary celebration of the Communist Party on 1 July and has since continued running below the higher levels observed earlier in the year.

So why is Chinese steel production declining? There are two important reasons for this: 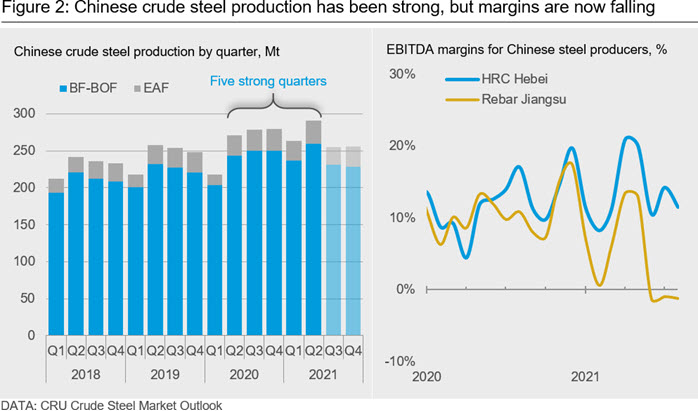 What about iron ore supply?

Collapsing demand in China has outweighed ongoing difficulties on the seaborne supply side. Australian producers, which make up nearly 60% of seaborne supply, have been struggling to keep production elevated and we are seeing slightly lower shipments compared with last year. Rio Tinto is the largest iron ore producer in the world and the company is challenged by heritage management and phasing in new mines into its system. As a result, both production and quality has been suffering this year. For Vale the export volume is looking good so far this year after a strong performance by its Southern and Southeastern System. However, the company is still struggling with iron ore processing and low-grade fines now make up a higher proportion of its sales, while pellet production has been disappointing and will remain weak for at least another year. Altogether, we see a slight improvement in seaborne supply in 2021 compared with last year, mainly driven by rising volumes from Brazil. It is important to remember that an increasing share of this volume has been sent to markets such as Europe and JKT, where steel production has recovered somewhat after a weak 2020.

How low can prices go?

CRU forecasts iron ore prices to decline further towards the end of the year, as we see a more balanced market with Chinese demand likely to stabilise for the rest of the year, while seaborne supply continues to improve. Q4 is typically a strong supply period and our sources in the market are suggesting that iron ore supply is set to improve after disappointing shipments between June–August.

So how low could iron ore prices go? One way of looking at a price floor is by looking at the variable costs of iron ore production. An iron ore producer will typically stop producing when the price falls below the variable cost of production. This is different from the total cost of production, which also includes fixed costs. By using CRU’s Iron Ore Cost Analysis Tool, we can see that during 2015 and 2016, iron ore prices bottomed out at the 95th percentile on the Variable Business Costs Curve. This is the point at which it became too painful for the highest-cost miners to produce and the market became increasingly concerned that some of them would halt operations. Our most recent analysis of the cost structure of the industry shows that the 95th percentile on the Variable Business Costs Curve translates to an iron ore price of ~$60 /dmt. 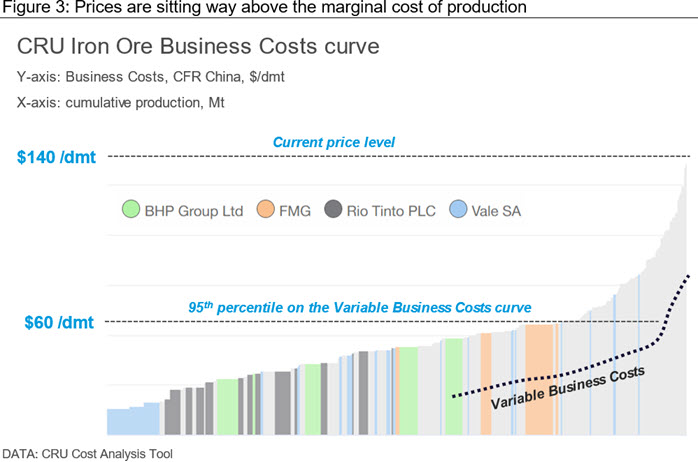 Are we likely to see the iron ore price fall that low? Certainly not. Although falling, Chinese steel production is still at high levels while iron ore supply is still far away from the highs observed in 2018, right before the Vale accident. Therefore, the iron ore market is still tight, with historically high prices. By looking at the total market balance, we find it unlikely that prices will fall below $100 /dmt in the coming months. We may even see prices rebound in the short term and there are a few upside risks to consider in the next few months: