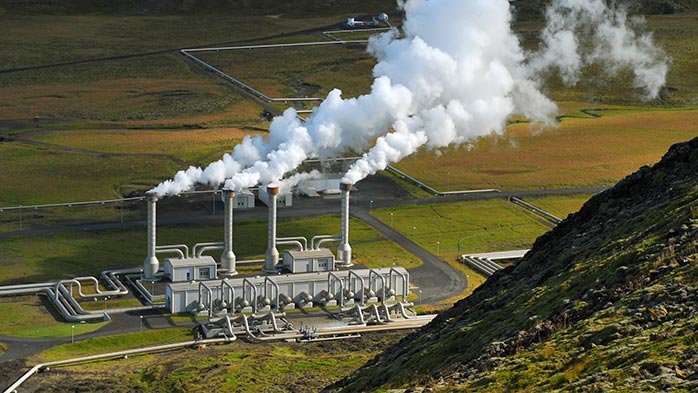 The largest economies in the world have pledged net zero carbon emissions over the next few decades. To reach this, governments will continue to target the heavy polluting power sector with carbon taxation and little to no free allowances.


The industry must move away from high emission fuels such as coal and natural gas towards renewable energy to lower their CO2 intensity and thus their costs. This feature looks at CO2 intensity as a factor to compare emissions from power on a like for like basis.

The necessity to rebuild the global economy after the Covid-19 pandemic has renewed climate ambition in major economies. In China, the world’s largest CO2 emitter, President Xi Jinping made the ambitious pledge to reach peak carbon emissions by 2030 and become carbon neutral by 2060. In the US, President Joe Biden aims for net zero emissions by 2050 and has pledged $2 trillion of fiscal spending for a ‘clean energy revolution’. In Europe, where net zero emissions targets have been in place for some years, governments have approved a climate deal built into their post-Covid-19 economic rescue plan and seven-year budget. It is not just major economies that have pledged net zero emissions, and it is not just the Covid-19 crisis that has been the catalyst for change. Almost 40 nations have followed suit, either with national laws, as statements of intent or submissions to the UN as part of the Paris agreement. 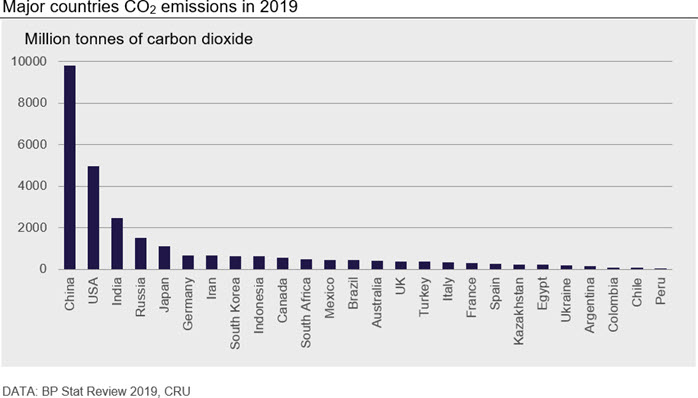 Emissions in the power sector 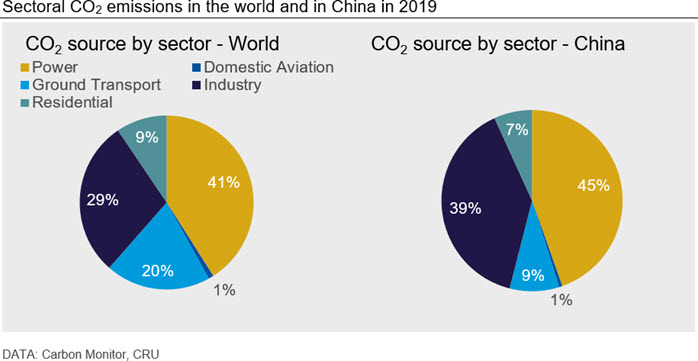 CO2 intensity and why it is important

CO2 intensity in the power sector is defined as the amount of carbon dioxide produced when generating 1 mega-watt hour of power. Each fuel that is used to produce power in a country is divided by the efficiency of that fuel, namely how effective the power stations in that country are at turning potential energy into kinetic energy. This is multiplied by the IPCC 2006 guideline emission factor of that fuel and by a constant to convert from GJ to MWh. This gives the formula below: 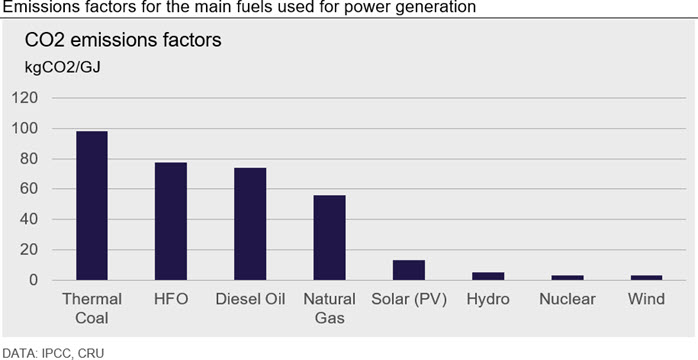 This allows us to compare the emissions from power generation between one country and another. As a country moves away from coal fired power generation to renewables, we can expect to see their CO2 intensity falling. From the chart below it is clear that the more coal a country has in its share for power generation, the higher its CO2 intensity will be. Conversely the higher the share of renewable in power generation the lower the CO2 intensity will be. There are some anomalies where despite the coal share being moderately low the CO2 intensity is high, such as the case of Kazakhstan, Russia or Indonesia. In these countries, the fuel efficiency for coal power stations is very low compared to the global average. In Russia and Kazakhstan fuel efficiency is low because both countries have old coal power stations with inefficient technology. While Indonesia also has old technology their lower fuel efficiency is primarily due to the lower quality of the coal used compared to others. 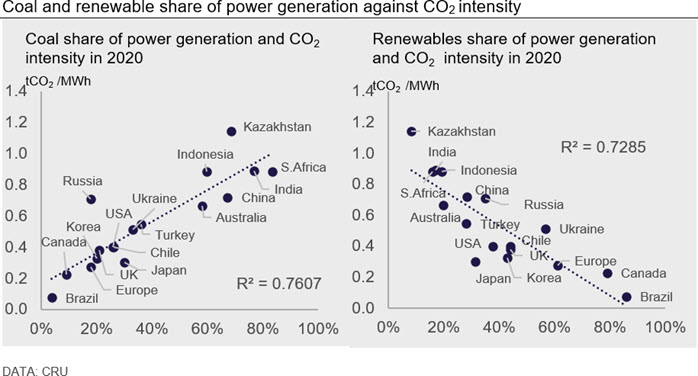 In 2019, China, USA, Europe, and India combined to produce 21,379 million tonnes of carbon dioxide, ~60% of total CO2 emissions globally. In China, more than 75% of the fuel mix for power generation was from thermal coal in 2010. This is expected to fall toward 45% by 2035 with renewable sources filling the gap. With President Xi’s pledge for carbon neutrality by 2060, it is likely to fall much further. In India, the proportion of power produced from fossil fuels had been rising until 2020. This meant that their CO2 intensity for power generation has been between 0.9 and 1 tonne of CO2 per MWh. This is expected to fall to almost 0.55t CO2 /MWh in 2035. India does not have a carbon price scheme or other incentives in place or scheduled in the future, therefore it will be the falling cost of renewable energy technology that will be the key incentive in low carbon energy making up 42% of power generation by 2035. 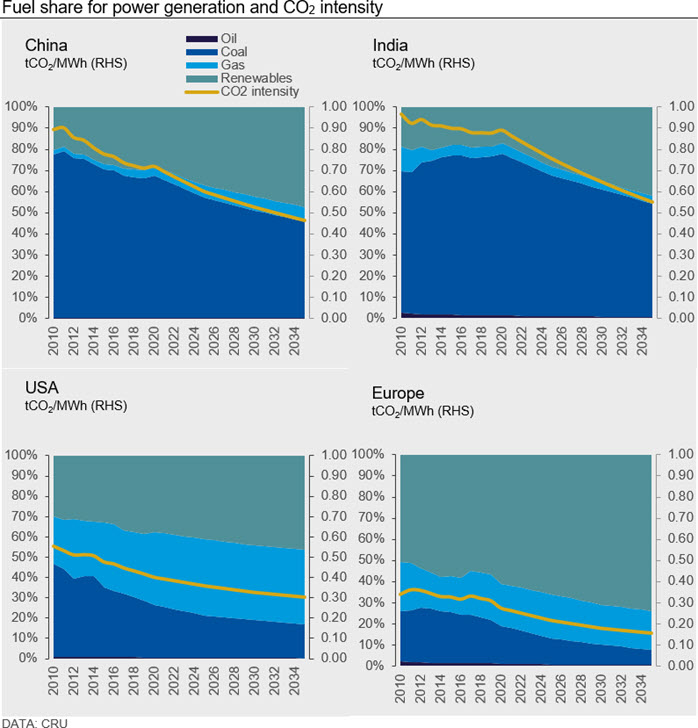 In the USA and Europe emissions from power generation are around 30% (41% world average) with much more CO2 emissions coming from ground transport, around 30% compared to the world average of 20%. In 2019 in the US, only 25% of power was produced from coal. Natural gas makes up a lot more of the proportion than any other of the main polluting countries. Natural gas has an emission factor of 56kgCO2/GJ compared to thermal coals 98kg CO2 /GJ according to the IPCC 2006 guideline.

Europe has had an emissions trading scheme in place since 2005 (with free allowances phased out from 2013) as well as other incentives for the adoption of low emission power. This has resulted in as much as 60% of power coming from renewable energy. This is expected to rise to ~75% by 2035 and as a result the CO2 intensity of power generation in the region will fall to a mere 0.15t CO2 /MWh. 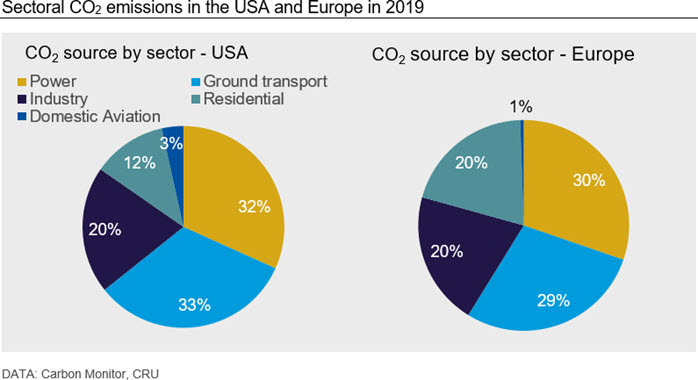 In many places around the world, power from new renewables is now cheaper than power from new fossil fuels. Increasing installed capacity leads to economies of scale which drives down the price and makes renewable energy sources more attractive. In many nations – for example India - it is cheaper power and not government led carbon tax initiatives that are resulting in big shifts to renewable energy.

The chart below highlights the change in levelized cost of power generation. This method accounts for the building of the power plant, the ongoing cost of the fuel and the operating cost of the power plant over time. The levelized cost of coal power has stayed consistent over the past decade, whereas the cost of producing power from gas either at a peaker plant or a combined cycle plant has fallen around 30-35%. What is particularly striking is the fall in the cost of power from solar photovoltaics, tumbling a staggering 89% in 10 years. 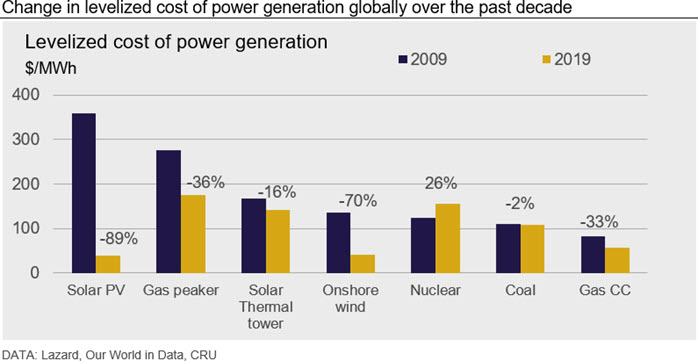 Solar modules began their astronomical fall in price from a very fitting place, space. Solar powers’ first practical use was on satellites. This niche demand area was the only sector willing to pay the extremely high price, not having access to fossil fuels in space being the main obvious reason for such. As demand continued to rise, more solar modules were deployed, and economies of scale allowed the price to fall, in a ‘virtuous circle’. Government subsidies and mandates have allowed the price to fall to the levels we see today. As more carbon taxes and emissions trading schemes come into place around the world, more and more heavily polluting power producers will look to fuel sources that do not incur a heavy tax cost. It just so happens that one of the fuel sources in question is also the cheapest available in levelized cost terms.

CO2 emissions from power generation in the world’s largest polluters has been falling. This is imperative if nations are to meet their net zero carbon emissions targets. Carbon intensity is a very important measure of emissions from the power sector as it allows us to compare countries on a like for like basis. We can observe how cheaper renewable fuel sources and carbon taxation are moving the fuel mix away from fossil fuels. For example, we forecast the average CO2 intensity in China and India to almost half over the next 15 years, with smaller gains in the US and Europe as they are already much less reliant on coal fired power. In the cases of Russia, Kazakhstan and Indonesia, it can be used to highlight inefficiencies on a plant and national scale both through old technology and lower quality fuel. At CRU the carbon intensity in combination with our fuel and carbon price forecasts is used in all of our cost work to get an accurate representation of the total effective cost of power. Discuss carbon intensity and emissions with our experts by getting in touch below.

Note: Since writing this insight in Q1 2021, we have updated CRU’s Long-term Thermal Coal Market Outlook to include our own estimates of the levelised costs of electricity (LCOE) for different technologies. Whilst in the original insight we drew on external data to conclude ‘new renewables is now cheaper than power from new fossil fuels’, now we believe the situation is not so clear cut, particularly given some countries have access to relatively ‘cheap’ coal and gas resources. Even where renewables costs, as based on project costs, appear to be on a par with or lower than new fossil-based power, once storage costs are taken into account, which is necessary for renewables to provide base load power, costs rise significantly. Thus, when comparing renewables with fossil-based power on a like-for-like basis, renewable energy remains more expensive when no carbon charge applies. Indeed, in the European context, we estimate that a carbon price close to or above $100 /tCO2 would need to apply to put base load renewables costs on a par with fossil-based power. Learn more by getting in touch with our team by clicking the button below.

Discuss CO2 intensity with CRU
Want to read more? Register to continue reading and gain access to all CRU Insights