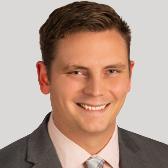 The need for virgin iron units in the US market is rising as new Electric Arc Furnace (EAF) capacity comes online.


Prime scrap supply will be unable to meet this rising demand, and so mills will need to consume higher amounts of ore-based metallics to obtain these iron units. Concurrently, many nations are moving to reduce CO2 output by taxing emissions, and the recent change in presidential administration raises the possibility that this will also occur in the USA. As a result, the potential for pig iron to be produced domestically on a meaningful scale has arisen. In this Insight, we examine North American pig iron producers, especially in the US, from both a cost and carbon emissions perspective and highlight some the hurdles domestic substitution of imports may face.

EAFs produce the majority of steel in both the USA and Mexico, while Canada’s steel output is still mostly done through integrated mills (BF/BOF). In 2019, EAF production in the USA and Mexico comprised ~ 68% and ~77% of total output, respectively. In contrast, Canadian EAFs made up 46% of total output. Although some EAFs can produce steel exclusively with recycled scrap metal, others must combine this with ore-based metallics (OBMs), such as pig iron and DRI/HBI, to ensure that impurities found in the scrap are diluted. Depending on the specifications of the steel being produced, these may need to be in the range 20-90% of the charge. Of particular note, production dedicated to automotive steel sheet products has stringent chemistry requirements relative to a variety of other grades and will require high levels of OBMs in the charge.

Growth in North American steel capacity, and thus pig iron demand, is being driven primarily by the USA. We estimate that there will be a total steel capacity increase of ~10 Mt in the country between 2018–2025, much of which will be from mills that make steels with strict requirements on residuals. As such, during this same period, we forecast that total pig iron demand will grow by ~1 Mt. 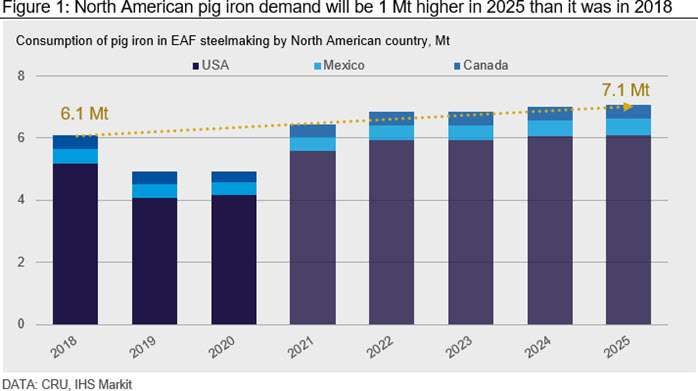 Currently, imported pig iron makes up nearly all the merchant supply available to North American mills. With demand set to increase, some integrated producers are now eyeing the possibility of serving this growing market with their own blast furnaces. Over the last decade, pig iron import levels have ranged between 4–6 Mt annually in the USA and 0.2–0.6 Mt in Mexico, with most material originating from Brazil, Russia, and Ukraine.

Focusing on the USA, pig iron import prices in the past have been competitive enough, and margins low enough, that most domestic companies struggled to justify the capex required to restart BFs and put domestically produced pig iron on the market. Additionally, there would have been an intrinsic tension between integrated steel producers supplying EAFs that also compete for volume in the same steel markets.

This situation has started to change, especially as prime grade scrap markets are to become tighter in the coming years as EAF-based steel production grows more strongly than manufacturing output. As such, we project that around 1-2 Mt of merchant pig iron will be produced domestically between the USA and Canada later this decade.

US prime grade balance to tip into deficit

With demand for virgin iron units set to increase meaningfully, and without a substantial increase in steel-intensive manufacturing activity, the US prime grade market is poised to tip into a deficit. While a slowdown in the US manufacturing sector over the past decades is part of the reason for this deficit, a relatively large increase in steelmaking capacity is the primary driver. Although the actual deficit itself is difficult to measure, in the chart below (Figure 3) it is clear one will arise due to a more substantial rise in EAF-based slab output compared to expected gains in prompt scrap generation. At the same, this structural market tightness will cause prime grade pricing to remain elevated for our current forecast period.

The likelihood that imports will mitigate some of this upside price pressure in the US domestic market is low. While US buyers often source from Europe, the pool of prime scrap there is also not growing and competition from European mills for this scrap will intensify if too much material leaves the continent. A similar situation is happening in Asia following the return of China to the international scrap market. Potential cargoes from Japan to the US, which are already rare, are now even less likely to occur as China looks to pull scrap into its own market from other industrialised countries in the region. 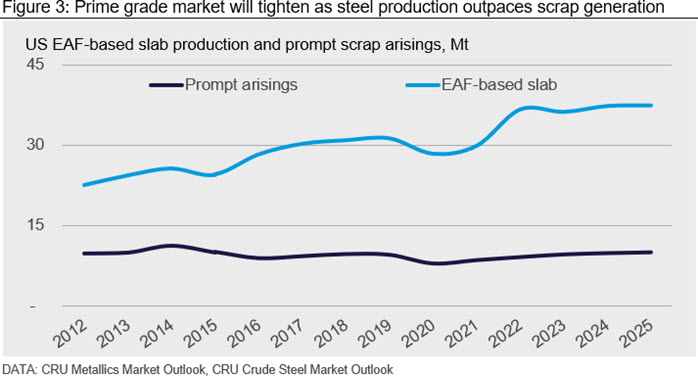 US pig iron is cost competitive vs imports

With demand for more OBMs on the rise in the USA, we used CRU’s cost models to examine the possibility for domestic pig iron producers to help alleviate prime grade shortages and to potentially displace imported volumes. Our findings suggest that the majority of domestic BFs could profitably produce merchant pig iron, based on CRU’s assessed US pig iron import prices and delivered cost estimates, see Figure 4 below. 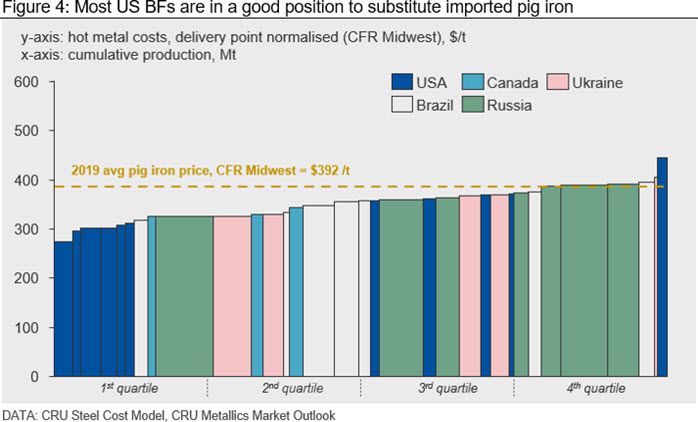 US BFs which occupy the first quartile would be well placed to weather price volatility in the pig iron market. Indeed, pig iron prices have moved considerably in the past few years, driven primarily by demand side factors. In 2015 and 2016, which were tough years for many pig iron producers, average annual prices sat at the 80th percentile of the delivered cost curve – a level high enough for most US BFs to maintain positive margins.

The major hurdle for most US BF producers will be the need to install a pig caster, but this presents a low capex alternative to building a new ironmaking plant. CRU estimates that the total installed cost of a pig caster ranges from $30–50 M. By switching to pig iron production, US producers could take market share away from higher delivered cost foreign importers, in particular those from inland Russia and Brazil which incur high logistic costs to transport pig iron from within the respective country to a port and then to its final destination in the US Midwest. Substituting higher cost imported pig iron with lower cost domestic pig iron would also shift the supply-demand equilibrium, leading to downward pressure on pig iron prices and lower transport costs for buyers.

It is still unclear whether US integrated producers would be willing to supply pig iron to their EAF competitors or whether EAFs would cede control of a critical raw material to a competitor. CRU’s discussions with market participants suggest that EAF producers generally are willing to supplement at least a portion of their imported pig iron with domestic supply, allowing them to keep established supply chains intact but also reduce the sovereign and transport risk/costs associated with traditional suppliers. This supports CRU’s view that domestic merchant pig iron output in North America will rise to 1–2 Mt by 2025.

The threat of additional steel production from the integrated producers as an alternative to the pig iron sale could prove to be a strong negotiating position for the integrated producers. There is also the possibility that these producers would be willing to sell to mills that do not compete in their markets (like long product producers). In addition, there is scope for internal transfers of pig iron within companies that own both EAF and integrated assets. In the case of US Steel Granite City Works and Big River Steel Osceola, for example, it does appear that the internal transfer of pig iron could make sense economically.

US pig iron producers will likely also compete well in terms of CO2 emissions vs imports. Indeed, Environment, Social and Governance (ESG) related issues are coming under increased scrutiny from stakeholders across mining/metals supply chains, and the pig iron value chain is no stranger to ESG issues. Several years ago, US automakers came under pressure from activist groups to address human rights abuses in their supply chain, specifically indentured labour in charcoal and pig iron production for several Brazilian producers. This ultimately led to a reconfiguring of supply chains away from particular suppliers.

More recently, the CO2 intensity of production is becoming increasingly important for iron and steel producers, in jurisdictions with CO2 pricing mechanisms, the difference in CO2 output between producers can provide a real cost and marketing advantage. US produced hot metal is amongst the most CO2 efficient in the world and all US BF producers sit in within the first quartile of CRU’s ironmaking CO2 curve (see Figure 6 below). US BFs benefit from the ability to charge a high proportion of pellet, which is low in gangue and consequently reduces fuel consumption and emissions. Further to this, the availability of low-cost natural gas allows BF operators to reduce emissions further by injection the gas into their BFs, whereas outside the USA it is more common for coal (PCI), which has a higher emissions factor than natural gas to be injected.

US hot metal production does have a higher CO2 intensity than gas-based DRI/HBI production (1.37 t-CO2/t-hot metal vs 0.51 t-CO2/t-DRI) and DRI production is growing in the USA. However, given the increasing demand for OBMs and value-in-use benefits that pig iron provides to steel producers it is expected that pig iron will continue to be required by US EAFs.

The Scope 1 (direct) CO2 intensity of US hot metal is approximately 1.37 t-CO2/t-hot metal, this is lower than all current US importers which average 1.82 t-CO2/t-hot metal – this could have important implications for EAF producers who are utilising imported pig iron in their metallics charge.

US EAF producers can claim to have some of the lowest CO2 intensity flat rolled steel production across Scope 1 (direct), Scope 2 (purchased electricity) and Scope 3 (indirect). Despite their low overall CO2 intensity, US EAFs could potentially decrease their carbon footprint further by utilising US produced pig iron, saving emissions generated during transportation from foreign markets to the US and taking advantage of the lower CO2 intensity of US BF production. CRU estimates that EAFs producing commercial grade steel could reduce their Scope 3 emissions by up to 10% from substituting imported pig iron with domestic pig iron, for EAFs producing steels with more stringer chemistry requirements and utilising higher levels of pig iron in their charges the emissions savings will be even greater. 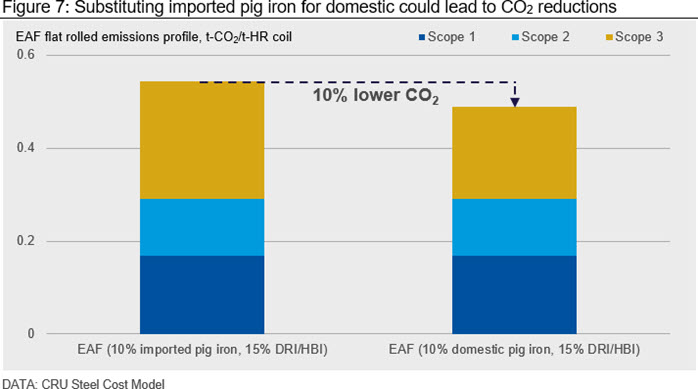 Lastly, under carbon pricing, the CO2 differential of US BF’s vs importers could have implications for the cost competitiveness of US produced pig iron. If a CO2 price were applied uniformly across all BF producers globally, the US would see a relative improvement in cost position of up to $26 /t for pig iron vs imports. Whilst a global carbon price may not be implemented in the near term, a carbon border tariff applied in the US could achieve similar results.

Internally within the US, the same carbon price would improve the cost competitiveness of DRI/HBI to pig iron by approximately $43 /t given the previously stated differences in CO2 intensities.

US domestic merchant pig iron a possibility for the future

Increasing EAF production in the US will lead to increased pig iron demand as the prime scrap market tips into deficit. US hot metal producers are well positioned to capture the increasing demand for pig iron, although whether competitive frictions would restriction pig iron trade between US integrated producers and EAFs remains to be seen. CRU’s Steel Cost Model shows that majority of US BFs could produce at costs competitive with the current import competition. Further to this, US produced pig iron is less CO2 intensive compared to imported pig iron, in particular Russian and Ukrainian pig iron. In a world with converging emissions reduction policies and carbon border tariffs, this could further improve the competitive position of US produced pig iron relative to imports.