Why have silicon prices surged? 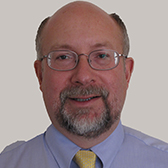 Silicon spot prices have risen dramatically in all markets over the past twelve months. The timing and magnitude of these increases differ.


Spot prices in the EU have experienced the biggest cumulative increase since the end of 2020 Q3. Between mid-2021 and early 2021 Q4, Chinese silicon prices experienced the largest gains, although prices in China have retreated significantly from their mid-October peaks.

From the past to the present

A confluence of factors has contributed to the recent surge of silicon prices. Some developments trace their origins back even longer, but a useful starting point is 2017. As the year progressed, expectations were widespread that substantial penalty duties would be imposed in the USA on a wide range of silicon suppliers. There were also indications that trade proceedings would be launched in the EU.

The US trade investigations set in motion a series of events. Demand was initially boosted by inventory accumulation, but the build-up of silicon inventories among consumers and traders started to weigh on the market when underlying consumption subsequently weakened. Meanwhile, a substantial amount of previously idle production capacity, that would not be subject to penalty duties, was restarted. When it became evident that additional trade restrictions duties would not be imposed, there was too much silicon supply and not enough silicon demand.

In response to mounting oversupply and falling prices, numerous silicon furnaces were closed or switched to the manufacture of ferrosilicon from late 2018 onwards. However, the effect of these supply curtailments was diminished as global silicon demand contracted further in 2019 under the adverse impact of slowing worldwide economic growth, compounded by uncertainties related to trade conflicts and other issues such as Brexit. Following a challenging 2019, the silicon market was poised for a recovery, but then Covid-19 hit.

When the Covid-19 pandemic struck in early 2020 and economic activity quickly deteriorated around the world, attention was principally centred on the adverse impact on silicon demand and the need for sizeable cutbacks in production to bring the market back into balance. Silicon demand subsequently staged a swift and remarkable recovery.

Although most market participants expected a significant rise in demand during 2020 Q4, the increase in global silicon demand turned out to be much stronger than expected. The jump in Q4 demand far exceeded the corresponding increase in silicon production, resulting in a gradual tightening of supply and spurring substantial price gains.

Global silicon demand continued to climb in 2021 H1, although the q/q gains were much smaller. Despite a projected H2 decline due to slower economic growth and mounting supply shortages and logistical bottlenecks, we still expect a double-digit jump y/y in total demand in 2021. This will lift the size of the global silicon market above the 3 Mt threshold for the first time ever.

Silicon supply has struggled to keep up with demand

The recovery in global silicon demand has yet to trigger a commensurate increase in silicon supply, fuelling further substantial price gains this year. The muted supply response can be attributed to a combination of factors. The gains in silicon spot prices were moderate through 2020 Q3. Thus, the window to boost production in Southwest China based on comparatively low-cost hydro was about to close by the time prices started to escalate. Subsequent declines in silicon production in Yunnan and Sichuan have more than offset record-high output in Xinjiang. Meanwhile, government-mandated power supply restrictions have kept a lid on silicon production in Inner Mongolia since early 2021.

Still, Chinese silicon production was higher in 2020 Q4 and in 2021 Q1–Q3 than it was during the corresponding quarters in 2018 and 2019. In contrast, output outside China has remained significantly lower than it was in 2019 Q1–Q2 as illustrated by the following chart.

The increase in non-Chinese silicon supply has been muted

As illustrated in the chart above, production outside China has only increased moderately from a 2020 Q3 low. Several silicon plants and furnaces have been restarted since then. However, despite strong demand and rising prices, a substantial amount of silicon capacity has remained closed. Meanwhile, unplanned production outages have resulted in a loss of ~10,000 t of supply since early 2021 and this figure could rise further by year-end.

Although silicon production outside China is likely be ramped up during 2022 H1, significant uncertainty still revolves around the amount of currently idle silicon capacity that will be absorbed back into the market. Ferroglobe has announced that the company plans to restart production at its Selma, Alabama facility in the USA by late 2021.

Production controls in Yunnan and other provinces are expected to trigger substantial reductions in local silicon output through year-end, albeit from a comparatively high level in Q3. The supply base in other countries is much too small to compensate for the expected decline in China. Thus, the expectations of a large reduction in Chinese production in 2021 Q4 added to the upward pressure on silicon prices.

In terms of y/y comparisons, in 2020, Chinese silicon output was higher in Q4 than it was in Q3, spurred by the recovery in global silicon demand and prices. This illustrates the country’s position, not only as the world’s leading silicon producer and exporter, but also as the supplier of last resort. Silicon stocks were drawn down prior to the jump in prices.

Inventories have not provided a significant cushion against production deficits and rising silicon prices. In the absence of detailed inventory data, shifts in the balance between demand and supply provide an indication of the magnitude and direction of aggregate changes in silicon inventories. These movements are illustrated by the chart below. This also shows seasonal variations principally caused by shifts in Chinese silicon production linked to differences in the availability and cost of electric power in Southwest China. 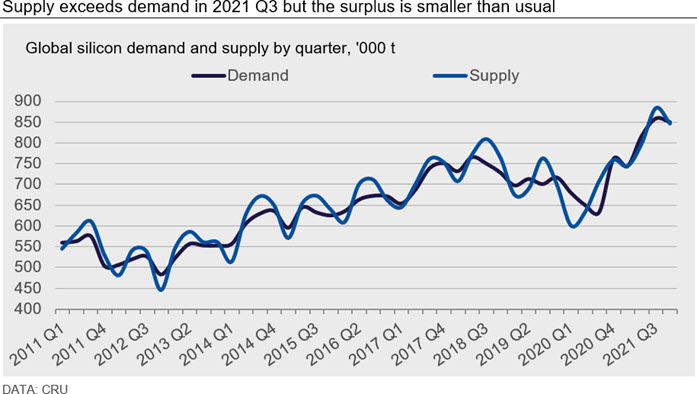 Reported stocks in China fell even more sharply than usual in early 2020 as actions taken by the Chinese authorities to slow the spread of Covid-19 had a bigger impact on silicon production than it did on demand. Inventories started to rise gain towards the end of Q2, slowly at first, peaking in mid-November before falling significantly through the remainder of 2020. Stocks fell further during 2021 H1, declining to an all-time low towards mid-year, before rising significantly during 2021 Q3.

Most consumers trimmed stocks in 2019 in the face of slowing economic activity and heightened uncertainties. However, larger than expected declines in underlying silicon consumption slowed the drawdown in some countries, notably in the USA. The same happened in 2020 Q2 under the impact of Covid-19. Consumer and trader stocks subsequently declined in the USA, Canada, and most of Europe. However, the 2020 Q4 jump in silicon demand was amplified by restocking, mainly in parts of Asia and the Middle East.

The rebuilding of silicon inventories in the USA and Europe in response to rising consumption rates has been hampered by tightening supply as many consumers have found it increasingly challenging just to cover their current requirements. Despite a slowdown in silicon consumption within the aluminium sector, this will still hold true during 2021 Q4 given the expected cutbacks in Chinese supply.

As shown in the previous chart, global silicon demand significantly exceeded supply during 2021 H1. The reverse was true in Q3. However, the surplus was not sufficiently large to return the market to balance. Moreover, significant supply deficits are projected from 2021 Q4 through 2022 Q2, amplified in the near term by power shortages and production restraints in China. Tightening supply will keep silicon prices elevated with the potential for further price increases in some markets through 2021 Q4 and possibly into early 2022.

The unprecedented increase in silicon prices to date have principally been driven by supply and demand fundamentals. However, rising power, raw materials, and transportation costs will have a significant impact on silicon prices going forward – so will economic growth and, by extension, the strength of silicon demand. Factors that will shape silicon supply, include Chinese government policies, thermal coal prices in China, transportation bottlenecks, and the timeframes for the reactivation of idle capacity, furnace conversions and investment in new brownfield and greenfield capacity.

These and other developments that will determine the future path of silicon prices were recently discussed at CRU's Silicon Market Forum. Silicon prices and the quarterly report along with our silicon cost model update are available to subscribers. To enquire about these services, please get in touch.