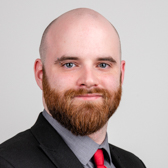 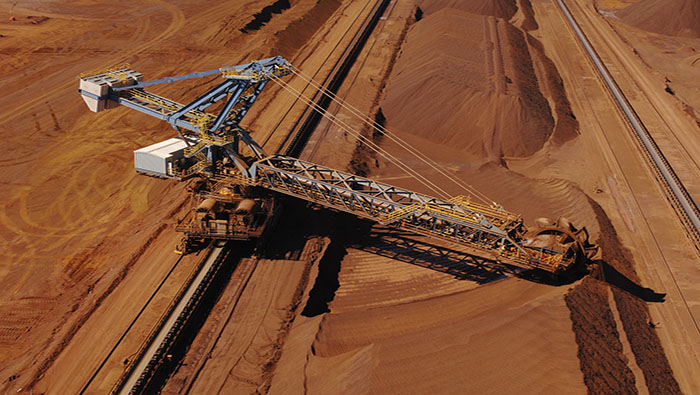 2021 was a historic year for iron ore, with the price reaching over $230 /dmt and achieving a $160 /dmt annual average. This elevated price, however, did not last long and in 2021 H1, we saw one of the sharpest price falls ever seen in the iron ore industry. China saw a decrease in consumption from 2021 Q3 which has continued up to now. Supply has been better than in the past few years, with high levels of shipments from most of Australia and recovering production from Vale. This high availability of iron ore has also been reinforced by built-up port stocks in China, consistently holding over 150 Mt for months and even exceeding 160 Mt at end-February.

The iron ore price has returned to more expected levels but has also rebounded and shot up to ~$150 /dmt by early February, now hovering around $135 /dmt. This price is still elevated compared to what the fundamentals indicate, but uneasiness in the market has caused extra demand. This uneasiness comes from fears surrounding Australian iron ore supply, the world’s largest iron ore exporting country with a market share of nearly 60%. While there are seasonal issues that always threaten Australia in Q1, there are newer, and less predictable, issues at hand this time around. 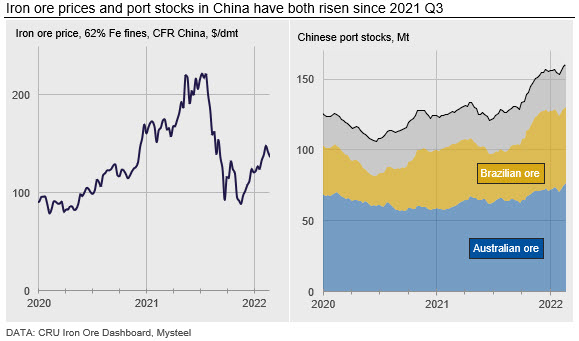 Since the new year started, we have seen impressive shipments from Australia through January, with Port Hedland consistently achieving ~11 Mt a week. More recently, there has been a slowdown which has resulted in 9.0-9.5 Mt /week in early-mid February, levels much more typical of this time of year. Rio Tinto has had a less promising start, while production levels are fairly typical for the season, their issues with grade quality is persistent. In 2021 Q4 the generally low-grade, non-specific product SP10 made up 18% of sales, or just under 16 Mt. SP10 only began being recorded in public sales numbers in 2019, and was never more than 3% of sales in 2020, but is now becoming a notable make-up of their total product. Altered operations at the Brockman mines due to issues regarding heritage management means that production of higher-grade material is affected and this will have an impact on the blended product PBF and PBL. CRU expects this to continue for the upcoming years. 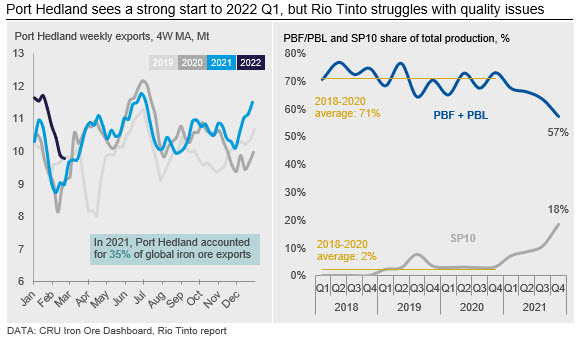 Australia’s cyclone season lasts from December to April each year. During this time, production and shipments are generally impacted, especially if the cyclones hit right at the major ports in Western Australia. In March 2007, the category 5 Cyclone George passed by the Pilbara coast. This caused $9.5 million worth of damage to the town of Port Hedland and nearby mining areas, as well as three deaths. It forced mining companies to halt all operations, including extraction, land transport, and shipments. Four days later, while emergency services were still dealing with Cyclone George’s damage, the region was hit by Cyclone Jacob. In more recent memory, Cyclone Veronica hit Port Hedland and Rio Tinto’s ports in March 2019, forcing them to halt operations for up to six days. While not as devastating as the 2007 cyclones, this also hit iron ore shipments, with Rio Tinto and Port Hedland respectively losing ~7 Mt and ~8 Mt in exports. 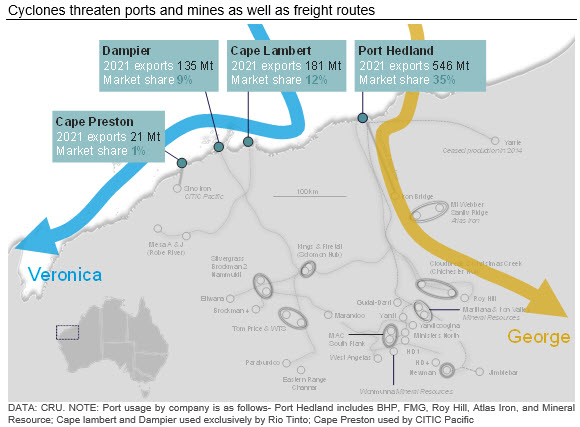 So far, this cyclone season is yet to disrupt activity in Western Australia, where the nation’s iron ore deposits are located. There have, however, been tropical lows causing issues in the east, particularly by Queensland, where coking coal shipments have been impacted. This has resulted in premium hard coking coal, FOB Australia, hitting an all-time high of $446 /t. Cyclones and tropical lows will remain a threat to Australian iron ore supply through Q1 and into the beginning of Q2. Some believe Australia to be largely safe from cyclones after March, but in recent years category 3 and 4 cyclones have occurred during April and lasted until May. La Niña has been declared, but is already past its peak, and is unlikely to affect the cyclone season in Western Australia. 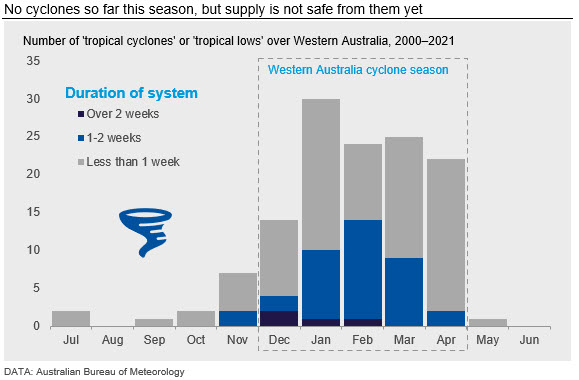 Brazil reminds us of supply threats rain can pose

Another concern for iron ore miners is rain. This issue recently impacted south Brazilian producers, wherein heavy rainfall led to significant flooding and dramatic disruptions to mining. This caused temporary halts to varying degrees for Vallourec, Vale, Usiminas, CSN, and Samarco, as well as transport lines such as the EVFM which resulted in bottlenecking and delays. This illustrates the potential risks to iron ore in Australia, although such a drastic case is unlikely to happen. It does, however, pose a threat to iron ore in northern Brazil and metallurgical coal in eastern Australia. This could result in rising premia for high grade iron ore in the coming months, as supply from northern Brazil would drop and preference for high-grade iron ore, which requires less metallurgical coal consumption, would rise. In 2021, northern Brazil accounted for nearly 50% of global high-grade ore exports.

A cyclone that does not hit the Pilbara region or iron ore ports can still bring worrying rainfall if the path passes by close enough. Rain caused by Cyclone Seroja was cited as a partial cause for Rio Tinto’s poor production performance in 2021. In 2017 heavy rains affected the Pilbara region to a much wider extent, reducing Port Hedland exports by 11%.

No easy solution to Covid-19 restrictions and labour shortages

Although Covid-19 has not caused the more drastic impacts to production as has been seen in South Africa or Peru, where production was significantly reduced at some sites, labour availability has still been a concern, mostly affecting maintenance to mines and infrastructure. Certain aspects of mining transportation rely on a small group of specialised workers, such as tugboat staff, and if these people are suddenly absent due to Covid-19 it can majorly halt shipments. In late-January, BHP detected Covid-19 cases amongst its Yandi mine workers and as a result placed 90 of their people into a 14-day quarantine, including the infected, close contacts, and casual contacts. The primary issue, however, has been the travel restrictions which have prevented those outside of Western Australia from entering to work. Even now as the country opens up and allows vaccinated tourists to enter, Western Australia maintains its regional restrictions. The easing of restrictions due for early February have been pushed back, and opposition politicians insisted on setting a new definitive date and similar calls from mining companies. This was eventually resolved when the new date of 3 March was announced, when international and interstate travel restrictions would be reduced, but vaccination, quarantine, and testing limitations would still be in place.

Restrictions have been reduced but remain present, State Premier Mark McGowan has reduced quarantine time from 14 to 7 days for close contacts and is now allowing for 530 international arrivals per week. It should be noticed that, even before restrictions have been eased, there has already been an increase in interstate travel for Western Australia. Covid-19 cases have remained low, as of writing there has been a daily average of 172 cases in the last week, in a state of almost 2.7 million people, but the numbers are still rising. It should be noted that Omicron is much more infectious, particularly its secondary strain BA.2, but is also less lethal than previous types such as delta. Western Australia has a very high level of fully vaccinated at 93% amongst those aged 16 and upwards, as well as policies enforcing vaccination for travel and employment in certain industries.

For now, McGowan is showing preference for slowly alleviating restrictions to help the economy, but this could be reversed if the infections get out of hand. Labour shortages have come from both Covid-19 restrictions preventing travel, and from Covid-19 cases hitting the work force. Decreasing restrictions resolves one cause of these issues, but accelerates the other, meaning that labour shortages will likely continue until the Omicron wave has passed.

Australian supply strong so far, but has a risky future

Australian iron ore supply started Q1 strongly despite weaker performance from Rio Tinto’s total production and grade quality, with Port Hedland maintaining 11 Mt a week through January. It fell to a more reasonable level of 9.0–9.5 Mt/week, partly because of maintenance affecting Roy Hill, but has risen again to 10.5 Mt. The country’s generally positive performance so far is set to continue, but is reliant on disruptions remaining to a minimum. Between cyclones, rainfall, labour shortages, and Covid-19, Australian supply cannot be guaranteed, and this has and will act as an upward pressure on the price as buyers fear a sudden stop. Even if there are no major disruptions from here, we will continue to see the fears of a sudden cut to supply keep extra demand, and therefore the price, higher than usual.