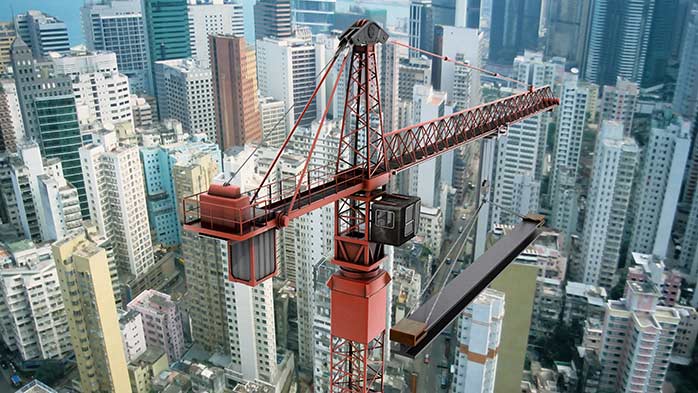 Other economic data continued to show similar trends to the past few months. This suggests that recent marginal easing policies are aimed at providing the economy with the space for a soft landing. PBoC’s latest move to cut policy rates and the deployment of infrastructure projects by local governments have shown the government’s commitment to economic stabilisation. With the downward pressures likely to persist, more supportive policies are likely on the way as the current easing cycle unfolds.

China’s economy grew by 4.0% y/y in 2021 Q4, down from 4.9% growth in Q3. Despite the threefold pressures (CRU subscribers only) that emerged in 2021 H2, overall GDP expanded 8.1% in 2021, well above the government’s target of ‘over 6%’, and slightly higher than CRU’s forecast of 8.0%. Growth in net exports and industrial production were the main economic drivers in 2021 due to strong external demand for goods. The downshift of Q4 GDP growth was mainly due to decelerating growth in investment and consumption amid the downturn in the property sector (Figure 1). 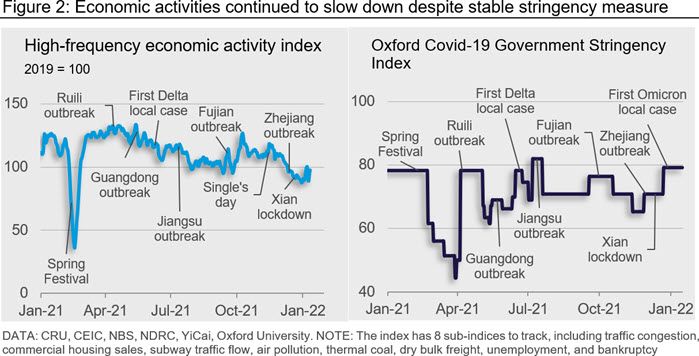 Fixed asset investment (FAI) posted an annual growth of 4.9% in 2021. FAI in manufacturing remained elevated, increasing to 11.8% y/y in December from 10% y/y in November. FAI in infrastructure improved from a 3.6% contraction in November to a 0.6% decline in December. We expect infrastructure investment to continue to rebound in coming months as local governments deploy infrastructure projects to support economic growth. The decline in FAI in real estate seemed to deteriorate, lowering to a 12.9% contraction in December from a 4.8% contraction in November. Even though the property market has begun to stabilise, it will take a few more months to fully rebuild the confidence among the developers and homebuyers. We believe that the sector has not yet reached the bottom and will continue to drag on the overall economy (LHS of Figure 3).

Industrial production (IP) posted an annual growth of 9.6% in 2021. Automotive production improved from a 9.3% decline in November to a 6.2% contraction in December. The rebound is attributable to an alleviation of supply-side constraints, particularly an improvement in chip shortages as well as strong policy supports for New Energy Vehicles. Production in the manufacturing sector improved from 2.9% growth in November to 3.8% growth in December. This suggested less pressure on manufacturers to comply with production restrictions, and that the power shortage problem has eased (RHS of Figure 3).

Recent policy development suggests that policymakers are marginally easing curbs on the property sector to prevent a hard landing. Notably, the Central Economic Work Conference called for using local real-estate policies to ‘encourage a virtuous cycle and the healthy development of the real-estate industry’. Accordingly, Guangdong province announced that the loan limits for debt-financed acquisitions will be removed from the consideration of debt in the ‘three red lines’ policy. This has paved the way for state-owned developers to carry out M&A deals with troubled developers. To boost the demand for housing, more than 15 lower-tier cities have implemented measures to support sales. In addition, mortgages are also becoming cheaper and more easily available as banks have been told not to be too restrictive.

However, as expected (CRU subscribers only), the current easing policies are still relatively marginal and will not alter the long-term downward trend. Furthermore, there is little sign of a similar stabilization in construction activities in December: sales of properties fell by 15.6% y/y in floor space terms, starts of properties contracted for the seventh consecutive month, falling by 31.1% y/y and completions of properties increased only slightly by 1.9% y/y. The average house price across 70 major cities slid 0.3% m/m in December. Fifty out of the seventy major cities saw new homes prices slide (Figure 4). Falling prices may dissuade homebuyers concerned about the value of their assets, making it harder for developers to sell properties and generate much needed cash. Overall, the marginal relaxations in policies will likely take several months or longer to feed through to the stabilisation of construction activities. 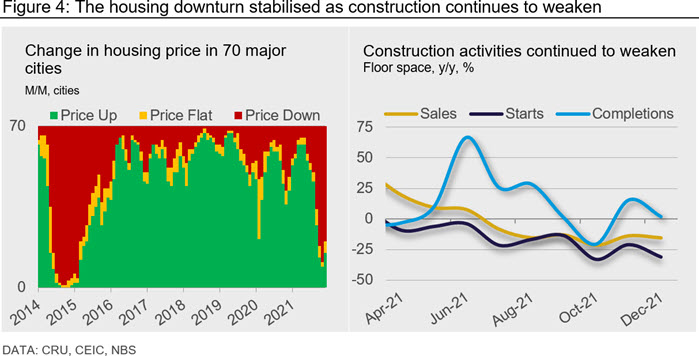 As expected, China’s central bank (PBoC) has become more accommodative towards supporting economic growth. PBoC cut its two major policy rates, the Medium-term Lending Facility (MLF) and the 7-day reverse Repo, by 10 bps. This will inject short and medium-term liquidity to help stabilise growth in 2022. Total social financing, an indicator that measures the country’s overall funding for the real economy, was RMB2.37 tn in December – growing by 10.3% y/y. Meanwhile, the growth of M2, the broad measure of money supply, grew 9.0% y/y in December. Looking ahead, we expect credit growth to stabilise at the level of 10.0% to broadly match nominal GDP growth. Looking ahead, PBoC will likely use a variety of tools to ensure reasonably ample liquidity, while improving its structural monetary policies to help key areas and weak links and to ensure that growth occurs in a reasonable range (Figure 5).