As paradoxical as it may sound, the drive to decarbonise the economy will drive up demand for the technical carbon products used in the production of commodities consumed for decarbonisation.

Examples might include electrodes for electric arc furnace (EAF) steelmaking; anodes for lithium ion batteries and silicon production for photovoltaic cells. Many commodities identified as key first steps on the path to carbon neutrality rely on production processes requiring reductants and electrodes. In most cases, non-carbon alternatives are yet to be discovered or proven at industrial scale, for example inert anodes for aluminium production have yet to be deployed at commercial scale.

Despite this growth in demand, the feedstock for these value added carbon products is likely to be depleted, as the energy sector moves away from fossil fuels. It is therefore very likely that at least some carbon product markets will experience structural tightness and increased price volatility for a sustained period.

In this series of insights we will examine the impacts of the energy transition on demand, supply / costs and hence pricing of technical carbon products. There is near-universal consensus on the growth prospects for selected technical carbon end-use markets and we will focus on that change in demand in this insight.

An example is the shift from BOF (Basic oxygen) to EAF (Electric arc) steelmaking, which is likely to be accelerated by the latter’s comparable carbon emission efficiency and the increased availability of scrap, particularly in recently-developed industrial nations like China. (Data: CRU Emissions Analysis Tool, CRU Steel Cost Model) With almost 200mt per annum of additional EAF capacity set to be added globally before 2026, demand for the graphite electrodes needed in the process will soar, and with it the demand for the needle coke, petroleum coke and pitch used in their manufacture.

Needle coke is also needed in the production of lithium-ion battery anodes. 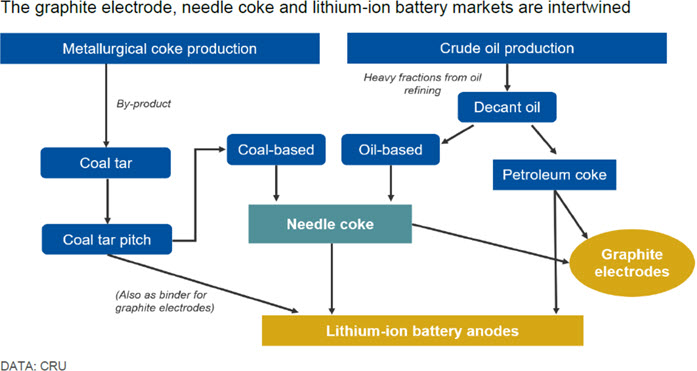 For the next decade, lithium-ion batteries are here to stay, and the incredibly robust production growth forecast inevitably means higher demand for their carbon-based anodes. The energy storage industry has seen the most intensive research and development activity over the last decade, and while several potentially viable alternatives to lithium-ion batteries are making their way through the development cycle; including alternative fuels (most notably hydrogen), as well as alternative battery configurations these are not expected to dampen Li ion battery demand growth in the near term.

The shift in energy generation towards renewables has already seen demand for silicon metal grow strongly, with solar energy becoming more affordable and more popular globally. Even with silicon availability tightening and prices sky-rocketing to record levels in the last year, demand has continued to increase, as more and more countries committed to a greater share of renewable energy in power generation. Silicon (as well as aluminium and titanium) smelting requires carbon anodes, and although every effort is being made to improve production efficiency, this cannot be expected to off-set the increase in production demanded by consumers. Production of silicon ex China will need to grow to produce PV panels outside China as Chinese domestic silicon production is increasingly directed to local value adding consumers. 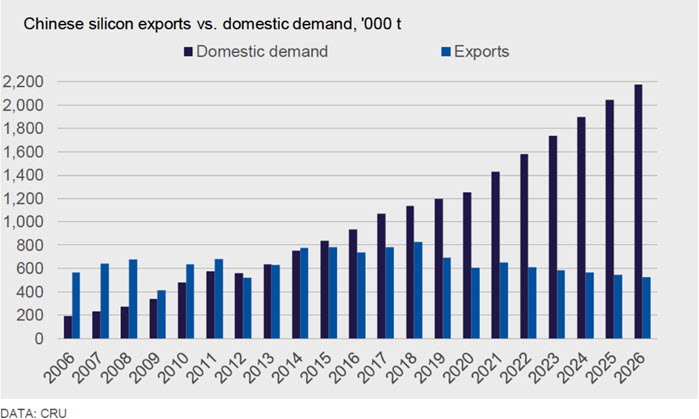 Mitigating factors are hard to identify in the short term

All these drivers points to a surge in carbon product demand, with little in the way of mitigating factors. Research and development has been guided towards identifying carbon emission reduction opportunities:

However, most of these technologies will take until the 2030s to make a decisive impact in the demand for carbon products. We have demonstrated in this article some of the downstream implications that CRU models regularly. CRU also closely monitors the availability of the feedstock for technical carbon, with consistent assumptions about the availability of coke, pitch and carbon black from a depleting base of fossil fuels. This allows a full mapping of the value chain and its key stakeholders. Our next insight will cover supply in more detail. If you would like a conversation with one of our Consultants, we would be delighted to speak with you.

From the lithium-ion batteries powering our sustainable future, to printing inks, insulation materials, and the rubber for safe and reliable vehicle tyres – technical carbon is a vital component for many of life’s essentials. But as regulators push for further reductions in the use of fossil fuels and industries embrace new ways of working, the supply of raw materials for many of these important products is under threat.