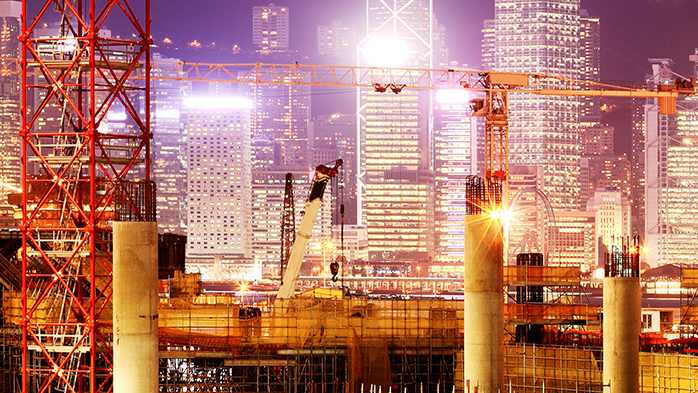 Residential real estate is a key driver of the Chinese economic outlook and, particularly, the outlook for metals demand.

The leading cities of Beijing, Guangzhou, Shanghai and Shenzhen comprise the 'tier 1' cities - these cities receive a significant amount of media coverage but, since they account for less than 5% of national real estate market volumes, focusing on these alone can give a misleading impression of broader market trends. Tier 2 cities are typically provincial capitals and municipalities - these make up close to 35% of national market volumes.  We group all other cities together as 'lower tier' cities - data on these cities is less readily available but since they collectively comprise around 60% of national market volumes, understanding them is critical to properly assessing the outlook for residential real estate in China. 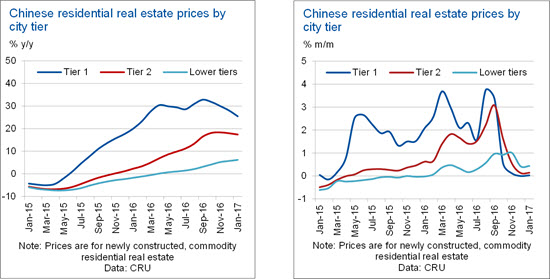 At a national level, real estate sales expanded by 22% in 2016, but starts increased by just 9% and completions by 5%. The relative weakness of building activity compared to sales was evident in each city tier, but was most marked in the lower tier cities where starts and completions grew by just 7% and 4%, respectively. By comparison, tier 2 cities saw the strongest performance with starts rising by 15% and completions by 8%.

Rapid price increases in tier 1 and a number of tier 2 cities last year prompted policymakers to introduce measures from late September onwards to cool demand, such as reducing the number of residences an individual can own, tightening restrictions on purchases by non-locals, increasing mortgage down-payment requirements and instructing banks to restrict mortgage lending.  As a result, year-on-year price increases have now slowed to an extent, but the removal of heat from the once booming markets is more evident in the sharp deceleration in month-on-month price gains, particularly in tier 1 cities.

Lower tier cities plagued by oversupply, not weak demand
While price gains in the higher tier cities prompted policy tightening, prices in lower tier cities have been rather subdued, highlighting the differentiated nature of the market. Analysing sales performance by city tier reveals two surprising results.  First, in tier 1 cities, soaring prices in 2016 accompanied growth in sales volumes of just 1%.  Higher prices, therefore, signalled that tier 1 markets are supply constrained. By contrast, sales volume growth in lower tier cities was 22% y/y, not far behind the 26% recorded for tier 2 cities. However, price growth was less than half that in the tier 2 cities. Thus, despite robust demand growth, the relative weakness of price increases in lower tier cities in 2016 confirms that there is a significant excess of developers' inventories in those markets.

Developers' inventories only part of the issue for new building
Sales running in excess of new supply will help to reduce developers' inventories, but there are two important caveats as to why inventories will take time to work off.  First, nationally and in lower tier cities, three-quarters of sales are 'sales in advance' for a home that has not yet been completed. As a result, these sales will not reduce the inventory of existing properties held by developers. Second, housing has been a highly popular investment instrument for many years, and a key driver of new construction, but a significant proportion of buyers opt to leave properties unoccupied once purchased. This has been confirmed by a 2014 survey by China's South Western University of Finance and Economics which found that 22.4% of homes owned in urban areas were vacant; by way of comparison, CRU research indicates that a vacancy rate of around 12% is typical in other major economies. The excess of vacant properties in China is another form of surplus inventory.  If China's vacancy rate falls over time towards the norm for major economies, which is what we project in our long-term housing forecasts, the need for new residential building to meet growing housing demand will be reduced.

2017 promises to be a tough year for residential real estate
At the end of their annual Central Economic Work Conference on 16th December, China's leaders stated that "houses are built to be inhabited, not for speculation", thereby highlighting the problem of home building for investment purposes. Media reports indicate renewed efforts by the authorities began in January to reduce mortgage credit growth, with lending to investors the primary target.  We expect that, alongside the large overhang of developers' inventories, tougher policies towards the use of housing as an investment will weigh on new housing construction in 2017 and beyond, as reflected in our long-term housing forecasts.

CRU's forecast is for national residential real estate to slow markedly in 2017, with sales and completions to fall by around 5% in 2017 and starts to grow by low single digits (all in terms of floor area).  Key determinants of the outlook will be government policy towards tier 1 and 2 cities and the speed with which developers' inventories are reduced in lower tier cities.

In tier 1 and 2 cities, we expect house purchase and mortgage restrictions to at least remain in place for most of this year and possibly tighten further.  Year-on-year price increases should slow to single digits by mid-year. Indicators to watch for are resilience in land sales and starts, which would point to success in boosting supply to reduce future pricing pressures instead of remaining reliant on policies that restrain demand. 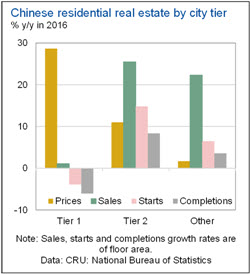 Lower tier cities have not been immune to the deceleration of price inflation in higher tier cities, but month-on-month gains have held up relatively well and are now outpacing those in tier 1 and 2 cities.  Sales growth in lower tier cities should hold up better than the higher tiers this year as they are not the focus of policy tightening.  Moreover, demand in some lower tier cities may receive a boost from buyers that have been displaced from higher tier cities. In lower tier cities the key indicator to watch will be prices, resilience of which would indicate ongoing progress in reducing the overhang of developers' inventories that is weighing on new building activity.

In the absence of a reversal in policy, which looks unlikely given recent government statements, 2017 promises to be a tough year for residential real estate.