Aiming for the sky in Uttar Pradesh 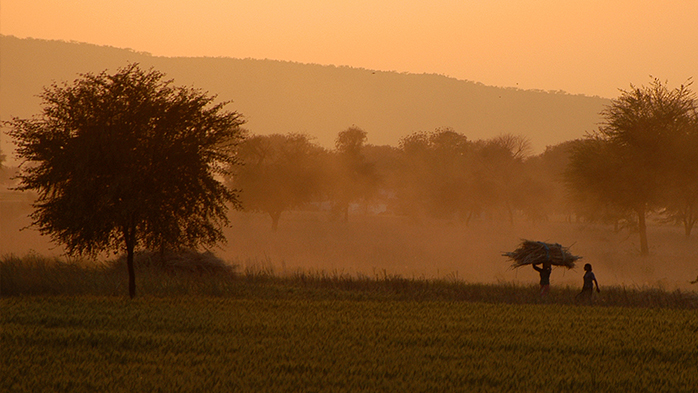 After the failure of the private sector to implement its bold policy of revamping three mothballed urea plants, the Indian government has decided to flex its fiscal muscle in Uttar Pradesh.


Previous attempts to strong-arm domestic urea producers to invest in the region's vintage urea capacity failed owing to concerns over longer-term gas pricing (and availability), as well as the longevity of the subsidy in its current form. The combined risk of this uncertainty had proved too great and without the government underwriting the returns from these plants, with both subsidised gas and the continuation of cost-offsetting subsidy payments, there was no commercial basis for the revamps. The government's latest strategy is to force cash rich, state-owned energy companies like Coal India Ltd to use retained earnings from their balance sheets to fund a $740 million equity investment that will be geared with $1.9 billion of debt financing.

The total project cost is scheduled at $2.6 billion to revamp three older, idled 850-1000tpd plants to 3,850tpd (1.27 million t/y at 330 days) and we were very interested to see how competitive the resulting investment would be against the country's alternative, de facto, supply strategy of importing Chinese and Iranian urea. Our hypothesis is that the building of additional urea plants would be a wasteful use of shareholders and tax-payers money, especially at a time when enthusiastic investment in the urea market and government interventions in the Chinese urea business are heavily discounting the value of internationally traded nitrogen.

To calculate the project's site costs and economic costs we have made a series of 'reasonable' assumptions. Firstly, that gas consumption at the plant will be around 31.0 MMBtu/tNH3, that the plant will receive the current subsidised gas price of $5.18/MMBtu, consume 565kg of NH3 per tonne of urea and that as a state entity, it would be happy to see economic returns over a 25 year period. To calculate the economic cost we have assumed a weighted-average cost of capital (WACC) of 13.05%.

The table above outlines our site cost calculation for the plant/s in Uttar Pradesh. Using the current subsidised gas price of $5.18 we get of site cost of just under $140/t, which on a cash basis is cheaper than both the current CFR India price of $215/t and our forecast price of $275/t in 2019 - around the time that these plants will be brought to market should construction commence this year. In fact, in each of our gas price scenarios above, the plant/s should create cash saving over importing urea (allowing for inland transport costs on top of the CFR India price). We selected $8.00/MMBtu as this is the price level to which the last Indian government was considering liberalising the domestic tariff rate, while $13.00/MMBtu was the pricing level of Indian LNG imports from Qatar just over 18 months ago. Both the scenarios are a possibility by the end of the decade given the scarcity of domestic gas supply in India.

However, these operating costs are not the only costs we need to consider when looking at the effectiveness of this investment. The cash held by the state entities provisionally backing this project could be returned to the Indian treasury and spent on other domestic priorities. And borrowing or issuing debt to fund 72% of the projects' capital requirement will also carry costs. We have tried to capture this in our base-case WACC of 13.05%, which we feel reflects a market rate for the cost of capital in India. An alternative scenario can be developed, whereby we use the government's credit worthiness to cost the debt component of the project (based on 10-yr Indian treasuries we will assume this is 7.5%) and the projects gearing to determine a lower cost of capital at 9.58% (cost of equity = 15.0%; cost of debt = 7.5%) 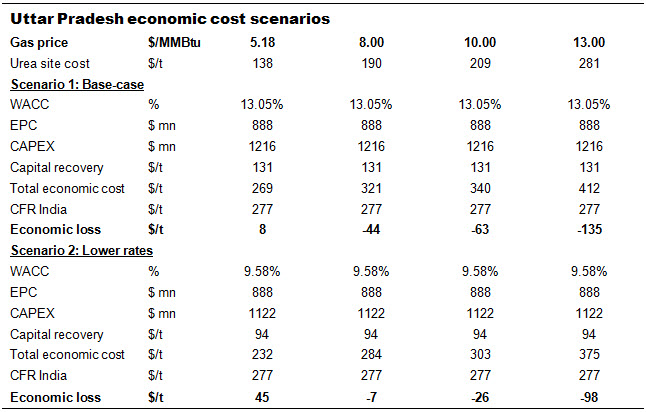 Based on this calculation, the building of these plants will require the subsidisation of both capital and gas to create a saving over a strategy whereby India continues to source its widening urea deficit with imported urea. Building these plants will also expose the government to an increasing liability should LNG prices rise above $10/MMBtu. Admittedly, by not building these plants the government exposes itself to the liability of rising urea prices. But, on balance, given the degree to which this market is oversupplied, we feel the LNG price risk is greater.