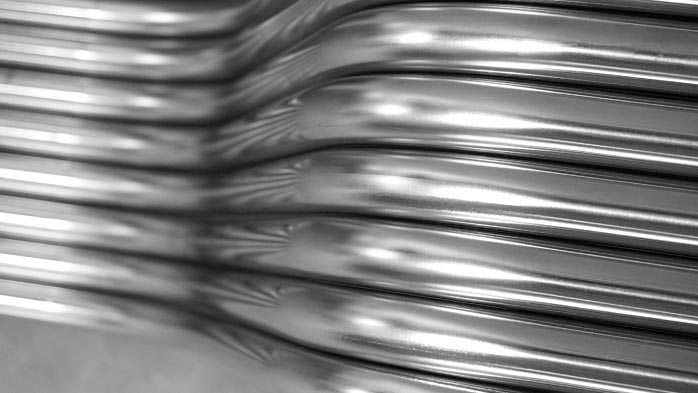 A sharp drop in the European Q3 ferrochrome benchmark settlement, combined with weaker nickel prices, will act as a drag on surcharges in both the EU and US markets in the third quarter. Transaction prices in both markets will soon fall back to early-Q4 2016 levels, eroding price gains seen over the last five months.


Rollercoaster ride for alloy surcharges
Ferrochrome prices have seen record levels of volatility in recent quarters. The 50% jump in the Q1 2017 European ferrochrome benchmark was the largest quarterly change since Q1 2009. Since US mills adopted the European benchmark in November 2016 to calculate the chrome component of surcharges, US alloying extras have risen dramatically.

Driven by strong demand and tight ore availability, the Q1 2017 European benchmark was settled at $1.65/lb from $1.10/lb the previous quarter, thus pointing to a large rise in surcharges. The US January 304-grade alloy surcharge did indeed jump - by almost 34% m/m to just under 63c/lb ($1,385/t), a 22-month high. Similarly in Europe, German 304-grade alloy surcharges for February deliveries rose by 7% m/m to a 28-month high.

Whilst both EU and US base prices also rose during the first quarter, the jump in transaction prices can almost wholly be attributed to higher surcharges, which, as shown in Chart 1, and using the surcharge for US 304-grade as an example, is principally a result of the higher Q1 ferrochrome settlement. 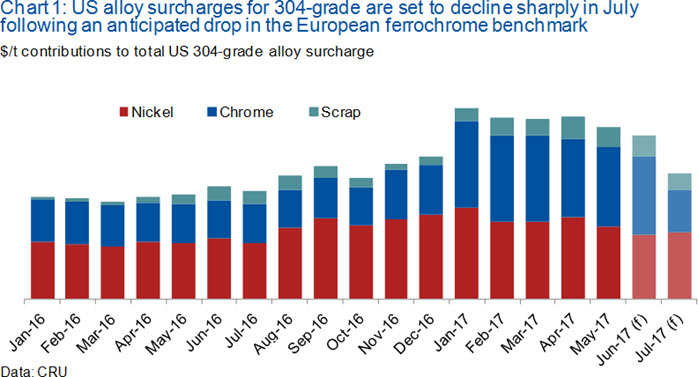 Following the jump in January, US alloy surcharges for 304-grade material remained relatively stable throughout the next four months of the year. Minor fluctuations in nickel pricing and only a marginal 11c/lb decrease in the Q2 ferrochrome benchmark saw surcharges remain rangebound between $1,254/t and $1,385/t. A welcome period of stability for service centres and distributors alike; albeit short-lived given the scale of the drop forecast for Q3.

Chinese spot ferrochrome prices tumble; EU benchmark to suffer
For at least the last year, the EU ferrochrome benchmark has tended to be aligned with contemporary spot market price levels in China, albeit at a delay of a quarter. Over the last three weeks it has become increasingly clear, that chrome ore prices into China are declining, both rapidly and by a large margin. The ore supply discipline shown by South African producers during H2 2016, which was vital in driving prices up to multi-year highs, has broken down altogether. Vast quantities of ore have been shipped to China within the last six weeks, and with demand waning, chrome ore stocks at Chinese ports have risen dramatically. Inventories are now estimated at close to 2Mt, more than double what they were last November.

Subsequently, spot market prices for Chinese high-carbon ferrochrome have come under considerable pressure in recent weeks. With the decline in both chrome ore and mill tender prices, spot prices have now fallen well below Rmb7,000/t delivered in the near term—which implies a CIF price of below $0.80/lb.

Given that the Chinese market has acquired greater influence over international ferrochrome prices in recent years, these developments will inevitably feed into mature economies and drive down the upcoming Q3 European ferrochrome benchmark. With this in mind, and assuming that the link between the Chinese spot market and the EU benchmark is retained for Q3—we could see the later drop back to near Q4 2016 levels.

What next for surcharges: a scenario analysis
The recent crash in Chinese spot market ferrochrome prices has caught many market analysts by surprise. Based on the amplitude of this fall, and the increasing significance this benchmark price plays on the stainless market, CRU has undertaken a scenario analysis. This looks at three potential outcomes of the benchmark settlement on both US and European stainless steel transaction prices over the near-term and provides a comparison to our previous price forecast update (April 2017). It should be noted at this stage however, that the scenarios analysis is intended to analyse the effects of different ferrochrome settlement prices alone, in the absence of changes to our base case assumptions surrounding exchange rates, nickel, scrap and base price forecasts. Furthermore, CRU believes there are more potential headwinds than tailwinds for near-term ferrochrome prices and have therefore skewed our scenario analysis to reflect this. For full details surrounding this scenario analysis, please see the May 2017 edition of the Stainless Steel Flat Product Market Outlook.

Following the recent chrome price developments in China and as part of the May 2017 Market Outlook, we have updated our price forecast in full and have subsequently made a number of revisions. Based on developments over the last month and a half, and in light of current and expected future market fundamentals, our base case scenario includes the latest exchange rate, scrap and nickel price forecasts.

Conclusion
Based on the scenario analysis conducted in-house and as shown in Chart 2 below, it is clear that alloy surcharges are set to collapse near-term. The effect on US surcharges will be far more pronounced than in Europe due to the differing calculation periods. For US surcharges, the full effect of the lower ferrochrome price will be fully taken into account for deliveries effective from July 1st, whereas in Europe, due to the calculation lag-time, the effects of the lower settlement will not begin to be felt until August and even then, spread over two months.

Although CRU anticipated a drop in the Q3 European benchmark, the intensity and speed of the collapse in domestic Chinese ferrochrome prices, which will guide the upcoming Q3 settlement, have exceeded prior estimates. Our base case scenario is underpinned by the view that we do not expect any improvement in ferrochrome prices over the coming month as the aggressive pursuit of buyers to drive down prices and seller’s readiness to accept these lower offers in a bid to stem losses will continue to drag prices downwards.

Furthermore, near-term demand prospects are poor. Chinese stainless mills continue to  issue production cuts in light of weakening market fundamentals and in an attempt to address the current state of oversupply. With this is mind, and as our base case scenario suggests, we anticipate European and US Q3 surcharges for 304-grade material to fall significantly compared to both our previous forecast and the prior quarter. 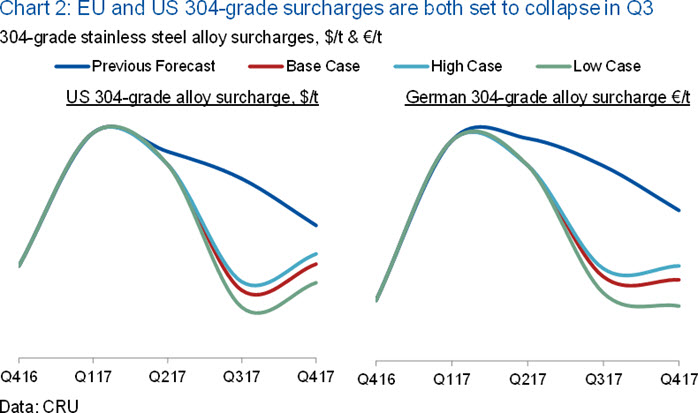 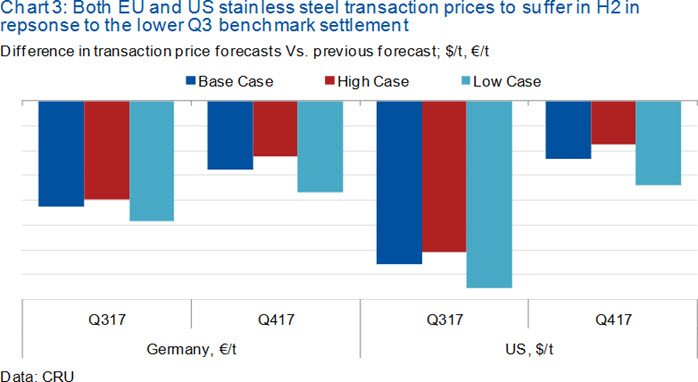 On the downside and according to our low case scenario, alloy surcharges could fall even further if Chinese high-carbon ferrochrome spot market prices were to continue moving downwards over the coming weeks. Regardless of scenario, a significantly lower Q3 settlement and subsequent sharp decline in alloying extras will act as a drag on transaction prices throughout the remainder of 2017. Chart 3 above shows the full extent of the different scenarios on transaction prices in both regions.