High prices mean high margins for the majors but the lack of investment creates opportunities for juniors. 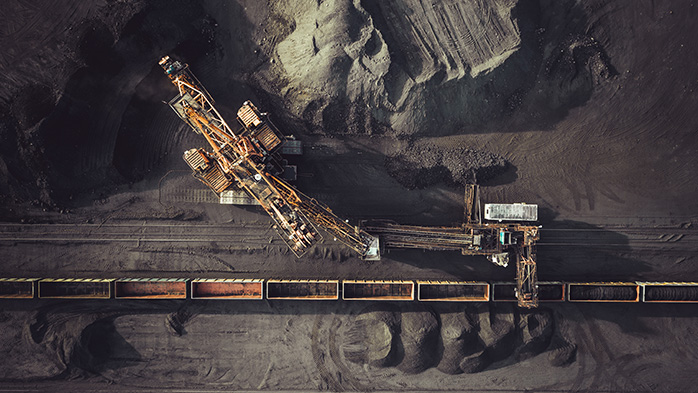 The last time that profitability in the metallurgical coal industry was this high, the industry’s majors were racing one another to spend billions of dollars to increase production capacity.


Exporting companies have earned average margins of 42% in the last twelve months, according to CRU's Metallurgical Coal Cost Model.  Today, however, they are largely reluctant to develop new projects. While this approach may be wise, high prices will create opportunities for junior project developers to increase the value of their portfolios and, potentially, bring new supply to the market.

Higher ‘hurdle’ rates for coal projects
An important consideration for those involved in the market is the extent to which supply will increase in response to higher price levels. The chart below shows our estimate that seaborne supply will increase by 15 Mt in 2017, therefore, we can say that the industry has responded thus far. However, in the six years following the previous spell of >40% margins, a cumulative 110 Mt of seaborne supply was added to the market and this contributed heavily to the sharp downturn in the market during the years 2012-2015. 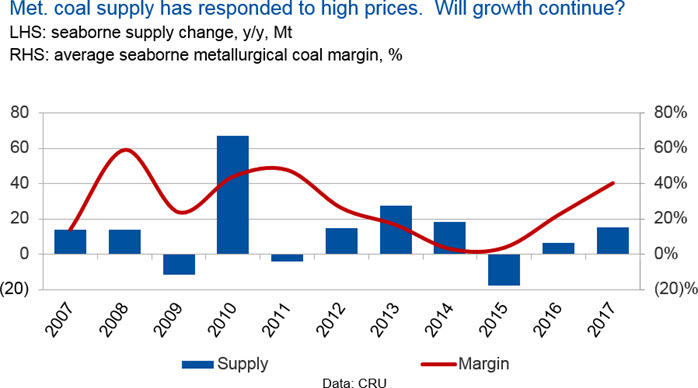 CRU’s mine-by-mine database shows that ~75 Mt of the 110 Mt of additions leading up to 2015 were by companies that were well-established and already had a strong foothold in the metallurgical coal industry. However, in our opinion, this scale of supply response from the majors is simply not going to happen in the next four years.

In recent months, we have been told that many coal companies will only invest in growth projects if they believe there is a reasonable chance of achieving a payback on investment within three years of first coal production. This new ‘hurdle’ rate is one that would be broadly consistent with an internal rate of return (IRR) target of >45% and, in our opinion, is largely unrealistic in an industry where assets typically operate for >20 years at least. Effectively, it is a signal that, in the near-term at least, a large proportion of companies are simply not willing to invest in new supply.

Approved projects will generate strong returns
One project that is being progressed by an industry major is the expansion of Caval Ridge by BHP Mitsubishi Alliance (BMA). The project largely involves building an 11 km overland conveyor to move run-of-mine coal from the Peak Downs mine to the Caval Ridge washplant; a facility that was built to produce ~10 Mt/y of saleable coal, but has only been producing ~6.0-7.5 Mt/y due to low mine capacity at Caval Ridge.  The transportation system will allow up to 4 Mt/y of additional production to be moved and processed using the latent washing capacity.  The capital cost for this brownfield expansion is $204 M – giving a low capital intensity of $58 /t if you assume an average, increased production of 3.5 Mt/y – because most of the capital costs were already paid 7-8 years ago when the Caval Ridge mine, washplant and other infrastructure facilities were built.  Our cost estimates and price forecasts suggest this expansion has an IRR of 47% and the $204 M will be recouped by the company by the end of the third year of coal production. 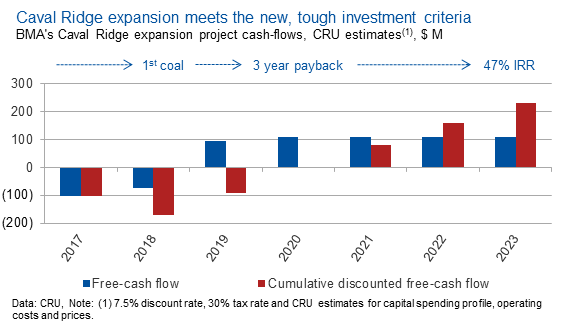 Re-assessing the previous investment cycle
It is important to note that we are certainly not critical of the caution being excercised in the industry regarding new investments. Many of the previous investments made cash-losses during the first few years of production and market conditions and resulting cash-flows during this time are critical when calculating returns (n.b. because of the ‘time-value’ of money). For this reason, it seemed almost certain that most of these investments would destroy value for shareholders. Interestingly, the sustained surge in prices means that CRU estimates many of these mines – which have now been operating for 3-4 years – will, in fact, generate a return afterall, albeit a small one. In the chart below, we have plotted our estimates for the net-present values (NPVs) and IRRs of three major investments that came online during the period 2013-2015. 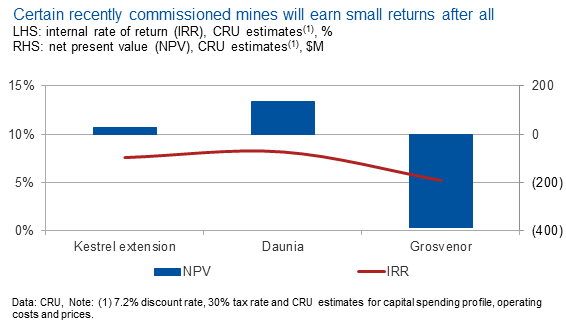 Despite this, the industry is still being affected by previous performance and we suggest that margins would need to be sustained at high levels for an extended period in order for the majors to pursue volume growth with the same voracity as they did during the period c.2007-2013.

Junior companies pushing to enter
Our research into future supply shows that there is, however, a growing number of potential projects being developed by less-established, junior mining companies. CRU’s Metallurgical Coal Cost Model 2017 contains information on 35 potential new metallurgical coal projects with a combined capacity of ~130 Mt and the majority (i.e. ~85%) are owned by non-established metallurgical coal producers. The model contains all of the necessary estimates to understand the NPVs of these projects and critical variables can be flexed and adjusted by subscribers. 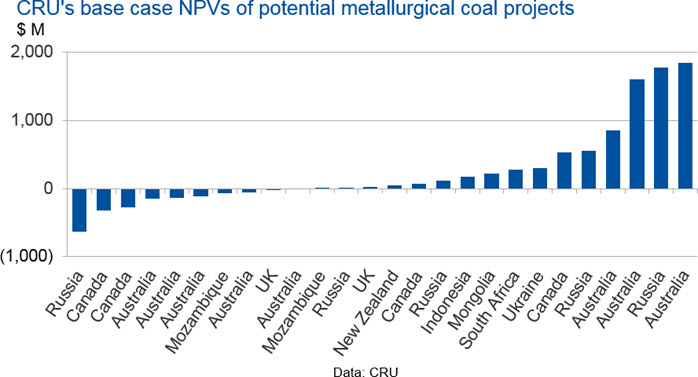 Naturally, many of these projects appear to be good investments, while others do not and, much like the previous investment cycle, timing will be critical.  The good news for all project developers is, the more stringently that coal investments are screened by the boards of the major mining companies, the longer the window of opportunity for generating high, early cash-flows and viable returns on new projects will remain open.