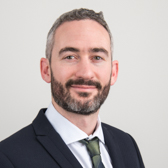 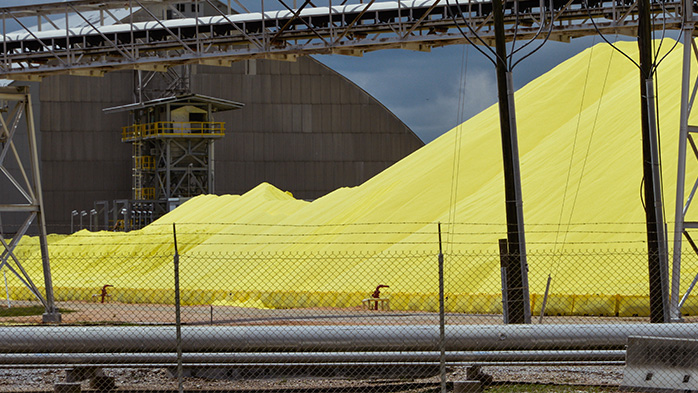 The launch of the buying consortium in China is intended to consolidate imports and increase buyer influence on import negotiations. Most market players agree that the consolidated buying should improve TGO’s negotiating position, but given that the venture is made up of three companies with different needs and strategies, it is unlikely to have a drastic price impact. The fragmented nature of Chinese sulphur imports makes consolidated buying challenging.


The bigger the buyer, the better the deal

It seems to be a common-sense proposition that larger buyers in a market have more leverage in negotiations than their smaller counterparts, and are able to use that influence to obtain lower prices. It is also the principle that motivated YTH, Kailin and Wengfu to form the TGO sulphur buying consortium.

In the sulphur market, activity in recent years has supported the above supposition. Prices have remained volatile, driven by the spot market activity of Chinese consumers and traders. But the largest global buyers have been able consistently to achieve lower prices than others.

China is by far the largest consumer and importer of sulphur in the world, with imports of 12.0 Mt in 2016, along with a further 6.1 Mt supplied from domestic production. Total Chinese imports were split over one hundred companies in 2016 with a wide range of domestic speculative traders adding to the price volatility. The largest buyers account for the major share of total import purchases, with the members of the TGO consortium – YTH, Kailin and Wengfu – accounting for 26% of the total in 2016. These three companies import sulphur into the southern region. Imports to the south in recent years have been flat, with growth occurring into Eastern China and along the Yangtze River. 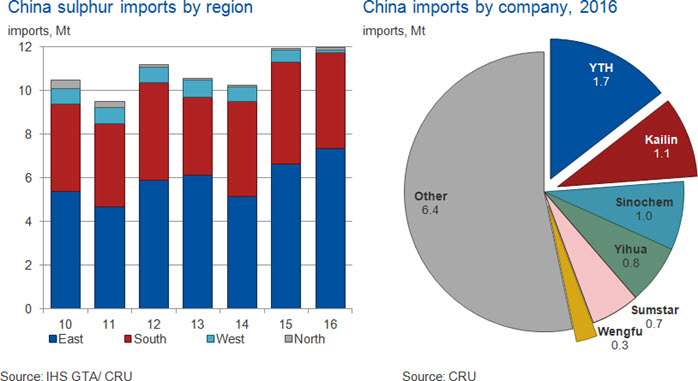 Sulphur Importers in the rest of the world

In Morocco, the second largest importing country, the 5.0 Mt of imports in 2016, were comprised of purchases made by a single company – OCP. The phosphate fertilizer producer has increased its fertilizer production and sulphur consumption in recent years, and continues to do so. OCP’s increased consumption has coincided with the increased global production of sulphur, particularly from Adnoc in the UAE. The buyer and seller have been able to agree to mutually-beneficial offtake agreements, ensuring that Adnoc finds a home for the bulk of its sulphur and Morocco has a reliable supply of large volumes of raw material.

Similarly, Mosaic in the US has been able to push down its sulphur purchase price in recent years. This is partly because the company has increased its share of North American sulphur demand, leaving US producers more reliant on Mosaic. In addition, the buyer commissioned a 1 million Mt/year remelter, which started in Q4 2015. The unit allows Mosaic to purchase solid sulphur from overseas, boosting its negotiating position, though in reality it would struggle to obtain spot solid tonnes more cheaply than it is getting its US product on a consistent basis.

The TGO consortium is comprised of three of the largest Chinese phosphate producers, YTH, Kailin and Wengfu. The three companies have a combined annual sulphur consumption of 4.5 Mt - not quite the level of OCP, but still substantial. It is worth noting, however, that their direct imports of sulphur totalled only 3.1 Mt, with the remainder made up of purchases from traders and domestic producers. The company was established in January 2017 and includes entities registered in Dubai and Guiyang, capital of Guizhou province in southwest China.

The entity’s purchasing has been focused on international dollar-based deals, rather than domestic RMB business. YTH and Kailin have integrated much of their international sourcing into TGO, though Wengfu has not yet sourced sulphur through the joint venture, according to market participants.

Purchase volume is not the only reason some of the largest sulphur buyers have consistently been able to source sulphur at prices lower than their Chinese counterparts. These buyers have also made efforts to build direct relationships with producers, often cutting out middlemen traders during negotiations.

Large buyers in the international market buy the majority of volumes on a term-contract basis rather than on the spot market, reducing volatility for both parties.

Large sulphur suppliers in the Middle East, Canada and the FSU have been reluctant to sell direct to Chinese consumers, whether in a consortium or not, and there are no signs of this changing in the near future.

TGO is also unlikely to have the predictable purchase volumes that would be required to source the bulk of its sulphur imports via term contracts, as the member companies have differing sulphur sourcing strategies and market approaches.

Buyers therefore still have to go through large traders for spot cargoes, with purchases through the likes of Trammo, China Oil, and Fertisul, as well as Tricon, which has recently built its presence in the sulphur market and plans further expansion in the commodity. Indeed, Tricon is understood to have already supplied two sulphur cargoes to the JV despite only being active in sulphur for a few months, and TGO’s first purchase agreement was a consolidation of individual buyers’ offtake agreements with Fertisul.

Sources suggest that TGO has been able to get a small discount below other Chinese buyers because of its large consumption volume, but traders cannot guarantee lower prices on all sales, as supply is still being sourced on a spot basis.

Traders have said that TGO had been successful in negotiating lower prices during the market downtrend in Q2 2017, but the company has struggled to get the same preferential arrangements during the current upwards trend in price. Overall, most market players agree that the consolidated buying should improve TGO’s negotiating position, but given that the venture is made up of three companies with different needs and strategies, it is unlikely to have a drastic price impact.

The establishment of a consolidated buyer of this scale has caught traders’ attention, and it will be worth watching to see how the venture develops its purchasing habits and relationships. If China remains a market focused on spot purchases TGO will have to accept the market price on a given day. If TGO is able to develop and maintain a predictable outlet to suppliers, then it may be possible to wield the sort of influence commanded by other large buyers around the globe.