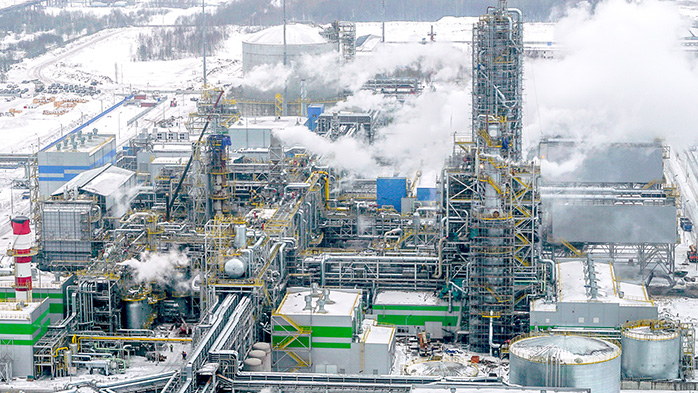 
We expect to see an increase in costs across the coal based nitrogen producers, lowering urea exports out of China and raising the global urea price floor.

From the cases disclosed by the MEP, most fertilizer plants that breached the environmental regulations were charged with air pollution, water pollution and industrial solid waste discharge, such as ammonia smell leakage, heavy carbon emission in waste water and phosphogypsum leakage. 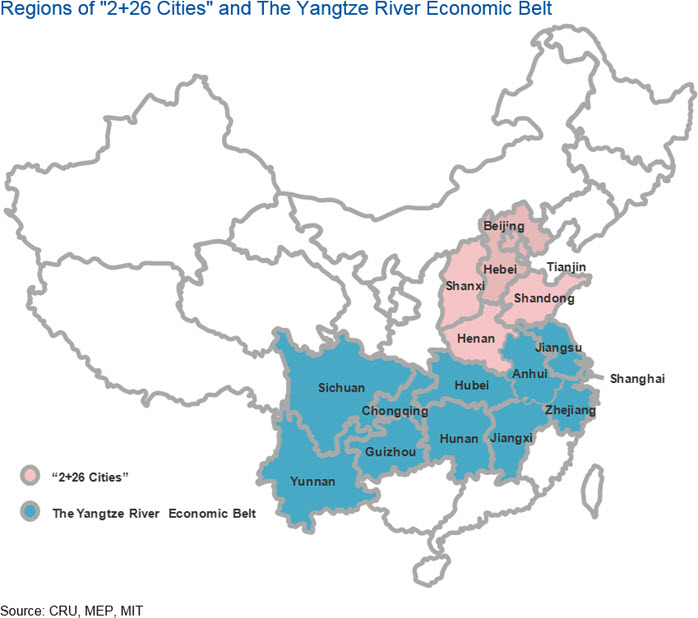 Environmental protection is a long-term policy goal as one of the seven core state policies for China. More importantly, the new government has linked environmental appraisals and targets with performance assessments for local government officials, which should promote effective implementation of the new environmental laws and regulations.

The Chinese government intends to take measures in the following three key ways to prevent and control pollution:

These environmental protection policies will have a profound impact on the Chinese nitrogen industry. 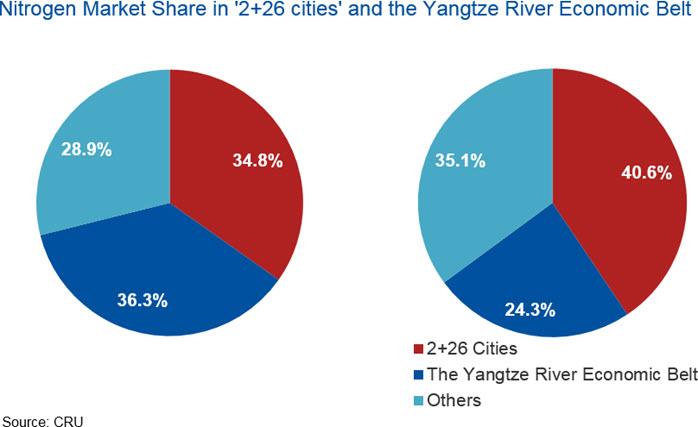 To some extent, China's oversupply in nitrogen capacity is a result of its failure in ensuring marginal producers meet environmental protection standards. Compliance of the stricter emission standards, will raise costs for Chinese producers and is expected to push up the industry cost curve and lead to faster elimination of marginal capacity.

CRU expects substantial closures of Chinese urea capacity in the next five years. Nearly 15 Mt of inefficient capacity is expected to shut down in 2017-2022 as the Chinese government continues to emphasize environmental regulations. This will help tighten the global urea market over the medium term. 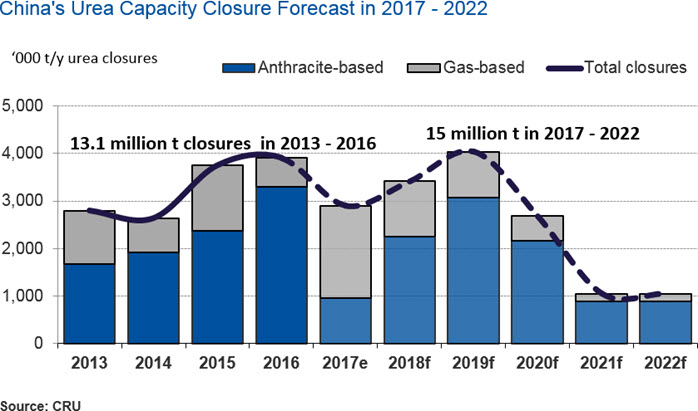 Nitrogen producers’ operating rates to remain at low
According to the statistics of China Nitrogen Fertilizer Industry Association (CNFIA), the operating rates of Chinese urea producers were below 65% since July 2016, when the Chinese government started to implement the first round of environmental inspections across the country.

Air pollution in China usually worsens in winter as the airflow close to the surface slows and this combined with the cold air, rainfall and snowfall seen in recent years will have a drastic impact on the diffusion of air pollution. This leads to stricter and more frequent inspections in winter, adversely impacting nitrogen producers. Coal-based nitrogen producers would be forced into lowering their operating rates in order to curtail pollution emissions during winter.

Furthermore, the supply of natural gas tends to be tighter during the winter heating season causing some gas-based producers to cease production temporarily and negotiate a relatively lower price of natural gas as per government regulations.

The combined actions of coal-based and gas-based producers during winter especially those located in 2+26 cities will maintain operating rates at a lower level than that of the past. 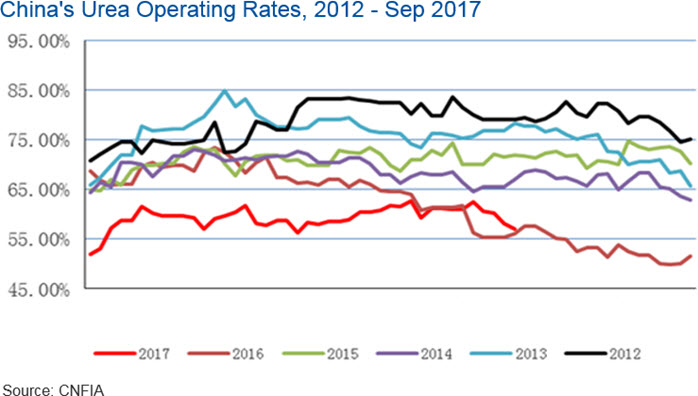 With the implementation of The Guidance to Enhance Industry Green Developments in The Yangtze River Economic Belt, many manufactures in key industries are required to keep a safe protection distance from the banks of the Yangtze River. As a result, a handful of nitrogen producers are ordered to relocate and restructure their site.

For example, the Hubei government has ordered all the heavy chemical and papermaking manufactures located within 1km of the Yangtze River to be relocated and restructured in other industrial zones. Hubei Sanning, a nitrogen producer with designed capacity of 880,000 t/y ammonia, 400,000 t/y urea and 100,000 t/y caprolactam, has been ordered to relocate its site, as it is just located at the Yangtze River. The relocation and restructuring of these nitrogen plants is expected to curtail Chinese operating rates significantly over the next few years.

Local governments’ emergency environmental measures may tighten demand/supply balance
To deal with heavy air pollution, particularly in autumn and winter, all the local governments in the '2+26 cities' have compiled emergency plans, which classify the level of air quality and a system of grades (I to IV) is accordingly employed.

In severe pollution conditions, plants of coal-fired power, steel, building materials, chemical and carbon will be ordered to curtail air pollution emissions as much as 40-50%. Despite most nitrogen producers not being listed in the emergency plan list they will be forced to take some measures to enhance the emission reduction efforts. This would further curtail production and exports out of China and tighten the demand/supply balance in the global urea market, particularly during the spring application season.

Coal-based nitrogen producers expedite feedstock switch to bituminous from anthracite
With the improvement in coal gasification technologies, a bituminous-based producer is able to consume poor quality coal and less energy, and emit less pollution compared to an anthracite-based producer.

Driven by the lower price of bituminous coal compared to lump anthracite, as well as stricter emission standards, most new nitrogen projects are based on bituminous coal while most closure capacities are based on anthracite. This presents some downside risk to the costs of the marginal supplier, influencing urea price forecasts over the medium term.

A detailed analysis of CRU’s coal price forecasts, Chinese urea production costs and margins and their impact on global urea prices has been included in our September Urea Market Outlook.

Conclusion
The environmental regulations implemented in China will result in more seasonality in production levels with lower autumn/winter production. It will also tighten the supply-demand balance in China as some Nitrogen plants will be forced to close, lowering exports out of China further. Compliance of the stricter emission standards is likely to raise costs for coal based nitrogen producers, pushing up the industry cost curve and raising the global urea price floor.